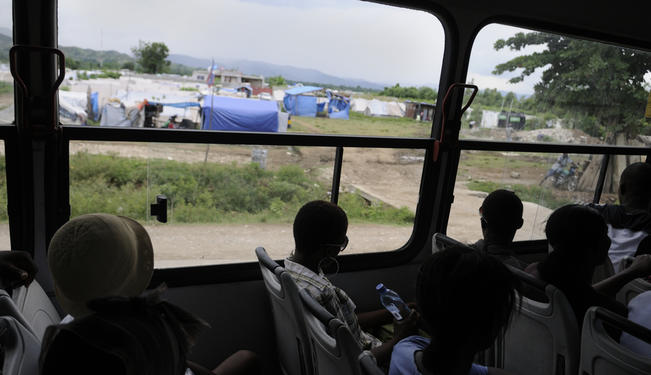 Repatriating refugees in the Great Lakes region often disregards individuals' circumstances, and may even put them at risk.

Jean-Marc is Burundian by nationality, but has never lived in Burundi. In 1976, he was born into exile in Rwanda where he lived as a refugee until the 1994 genocide when his father was killed and the rest of the family had to flee to Tanzania. Over the course of the next two decades, his family were moved to three different camps within Tanzania, finally ending up in Mtabila camp. From 2009, in the aftermath of a peace deal and democratic elections in Burundi, they came under increasing pressure to return to Burundi as part of a "voluntary repatriation" exercise.

However, Jean-Marc did not want to return for two reasons. First, he had never lived in Burundi: his parents had died and he did not know whether or not he would be able to access the land on which his family had once lived. Second, he believed it was too dangerous: he knew that because of the circumstances surrounding his family’s flight and his reluctance to return, the government of Burundi would accuse him of supporting the former rebel group, the Forces National de Libération (FNL).

Despite his concerns, Jean-Marc was ultimately given no choice. After various warnings and threats, the government of Tanzania and the United Nations decided he no longer needed protection, revoked his refugee status, and told him and his family to go. At the end of November 2012, the Tanzanian army moved into the Mtabila camp and started forcing people onto trucks: “There was no time or opportunity to pick up our things. We left all our documents and belongings in the house.” On arrival in Burundi, he was unable to claim his land as someone else was living on it and, as Jean-Marc said: “In Burundi there is no place for those who have nowhere to go.”

Jean-Marc was threatened with death and intimidated by members of the imbonerakure, an unofficial government militia-cum-security and intelligence force that allegedly operates in Burundi. He was accused of being a supporter of the FNL, and was told by a member of the security forces: “This is not like Tanzania, we shall finish you!”

Fearing for his safety, he fled to Rwanda and then sent for his family to join him. They travelled together to the Nakivale settlement in the east of Uganda. He has now had his application for asylum turned down by the Ugandan government and does not know where else to go. He is living in a shed in a refugee camp, along with 225 other Burundians, receiving no assistance. He is 37-years-old and has been displaced all his life.

Looking for Somewhere to Belong

Jean-Marc has spent his whole life looking for somewhere to belong – somewhere that he can find safety, where his children can go to school, and where he can find work to support his family. Current regional and international refugee protection structures have failed him. And he is not alone: his predicament is echoed by thousands of individuals and families across the Great Lakes region. As a young Burundian woman with three children, also in Nakivale camp, said: “No-one wants us in their country."

So how has this happened? Although the answer to this question is multi-faceted, it is in part due to a broader trend in the Great Lakes region to push large-scale repatriation initiatives even when, for many individuals, returning home is impossible. After decades of conflict, the region is seen to be in a new era of stability, and governments, along with the international community, are keen to remove the refugee "burden" of the past decades. Countries that in the last decade have generated large flows of refugees, now appear to have reached greater stability and it is time to promote return.

This logic of repatriation makes sense: many refugees decide to return at the slightest sign of increased stability, and approximately half a million refugees have returned to Burundi since 2000. After all, no-one actually wants to be a refugee, and it is unlikely that anyone would choose to stay in a refugee camp unless there was good reason for doing so. The problem, however, is the assumption that if repatriation makes sense for some, then it makes sense for all, thereby disregarding individual circumstances that may make return inadvisable or even dangerous.

As a result, the fact that repatriation is being pushed without offering alternatives is leading to a growing crisis in the region. With no space within current national, regional and international protection structures for renewed flight from an apparently post-conflict country, a remnant of refugees and asylum seekers remain in a perpetual state of exile – unrecognised as refugees and unable to access protection as such. The fact that Jean-Marc has nowhere to go, demonstrates that an approach to ending exile — which essentially focusses on refugee status as a humanitarian category and on geographic movement (namely return across a border) as proof of success — remains blind to political realities.

Specifically, it ignores the fact that there is a deep-rooted failure in citizenship policies in the region – polices that have reinforced exclusive approaches to belonging, and therefore have left hundreds of thousands of individuals living in a state of permanent exclusion. Jean-Marc’s story reveals a Tanzanian government fatigued with hosting refugees now that a peace agreement has been signed in Burundi; a Burundian government that has failed to implement equitable structures for land distribution and failed to create an inclusive polity in which opposition is tolerated; and a Ugandan government that is reluctant to add to its refugee "burden" and is refusing to grant refugee status to these asylum seekers.

Such exclusive approaches to belonging have failed to reflect the fact that the boundaries of how and where individuals can seek to put down roots — whether at a local, national or regional level – do not necessarily conform to tidy national categories. While at a policy level some progress has been made – for example, under an evolving political union, citizens of Burundi, Rwanda, Uganda, Kenya, Tanzania and Uganda are now being invited to become "East African citizens" and to live and work across borders – in practice these "new" forms of belonging still remain elusive, as evidenced by Jean-Marc’s predicament.

Recognition of this failure to resolve crucial issues of citizenship in the region, however, also points to the possible resolution of exile: just as the absence of citizenship leaves refugees in a state of perpetual exile, the active political (re)engagement of refugees in negotiating effective access to citizenship not only resolves displacement, but can be essential in helping states transform – which, in turn, prevents renewed displacement. However idealistic this might seem, it is a reality that needs to be acknowledged and embraced – not resented and fought against.

Therefore, Jean-Marc’s story provides an opportunity to re-think some of the structures and assumptions that underpin the relentless drive for repatriation. His story points to the need for more creative and flexible approaches to belonging that would allow individuals and groups alternative means to securing safety for themselves and their families.

Ultimately, exile within the Great Lakes will only be resolved when spaces for belonging at a local and national level become less exclusive; when the deficit in justice in the region in the aftermath of multiple layers of conflict have been equitably confronted; and when the international community recognises that it is a political, rather than humanitarian solution that is needed. Resolving exile will not only benefit those who remain excluded from national belonging, but will lead to a far stronger polity that is less likely to be hit by renewed conflict from those forced onto the margins.

*[Note: Some details have been changed for security and safety reasons.]
The views expressed in this article are the author's own and do not necessarily reflect Fair Observer’s editorial policy.