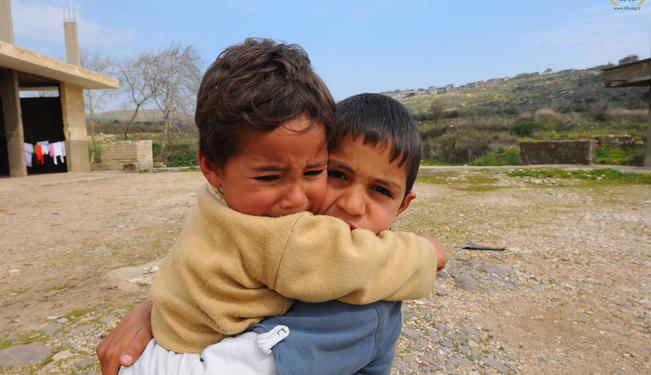 As the permanent members of the UN Security Council continue to bicker over the Syrian crisis, the ongoing violence has had an adverse effect upon the children of war.

While the United Nations have suspended their observer mission inside Syria, violence in the country continues to surge, causing a rising number of refugees in neighbouring countries. The French Foreign Minister, Laurent Fabius, has been latest official to brand the crisis as a civil war.

Fabius's statement came on June 13 as he urged for Kofi Annan's six-point peace plan to be enforced under the United Nation's Chapter Seven provision, together with a new set of heavier sanctions. A UN Security Council resolution under Chapter Seven of the UN Charter would permit the presence of armed observers, and for countries to take military action to restore international peace and security. However, both Russia and China are still unlikely to accept such a plan.

In the meantime, violence continues to escalate inside Syria, where the Bashar Al-Assad regime has now lost parts of vital cities to the opposition and are fighting to reclaim them.

According to the latest figures from the United Nations High Commissioner for Refugees (UNHCR), approximately 85,000 people have now fled from Syria into neighbouring countries, including Lebanon, Turkey, Iraq, and Jordan. Significantly, most refugees have fled across Syria's northern borders into Turkey.

The Turkish foreign ministry said on June 13, that over 2,000 refugees had crossed the border over the course of 48 hours. "As of today, nearly 29,000 Syrian citizens have been sheltered in our camps,” said Onur Takil from the Disaster and Emergency Management Presidency in Turkey (AFAD). "There are currently nine tent cities in Hatay, Gaziantep, and Sanliurfa. We have also set up a container city that has the capacity of 12,000 people in Kilis."

Since Turkey opened its doors to Syrians fleeing the violence, refugees have been accommodated in camps across different locations on the Western side of the Turkish border. The camps are run by the Turkish government, and it is mainly the Turkish Red Crescent who deals with the immediate response of those seeking refuge. According to Turkish authorities, all types of humanitarian relief for Syrian refugees have been supplied by AFAD, including food, health and religious services, security, communication and education.

Turkey is currently running their relief programme without assistance from the international community or the UN.

"We have proposed to help the Turkish government, but it is only when the Turkish government asks the UN for help that we can assist. They will only do so if the refugee influx exceeds their capacity to respond, and that has not yet been the case," said Jens Laerke, spokesperson for the United Nations Office for the Coordination of Humanitarian Affairs (OCHA). "We have complimented the Turkish government for keeping their borders open, as we have done with the neighbouring countries – it is very crucial at the moment. People are in danger, and they want to flee," added Laerke.

The Weakest Suffer the Most

The Syrian conflict has revealed its true horror in the way children have been largely targeted.

The uprising primarily began in March 2011, after anti-government protests erupted in Dera'a where locals demanded the release of 14 children who were arrested after writing anti-government slogans on a wall.

One significant video to surface out of the conflict was the disturbing footage of 13-year-old Hamza al-Khatib's mutilated body. He was allegedly arrested by security forces during one of the first rounds of protests in Sa'ida, a few kilometres outside of Dera'a. After spending nearly a month in custody, he was returned to his family, tortured and dead. The image of al-Khatib's tormented body marked only the beginning of what has become a signature of the Syrian conflict. Online videos showing the suffering of children have reached the rest of the world via social media.

According to the Annual Report of the Secretary-General on Children and Armed Conflict, children as young as 9 have been victims of arbitrary arrest, detention, ill-treatment, torture, sexual violence, killing and maiming. There has also been evidence of children being used as human shields. The report revealed that both sides – the Syrian government together with the Shabiha (armed civilian militia), and the armed Syrian opposition – are guilty of violating the basic human rights of children.

Indeed, a large number of children who have fled the conflict may be suffering from significant emotional trauma, and are in dire need of immediate assistance.

"In our sheltering centres there are a number of psychologists, sociologists and social workers who are providing psychosocial support for Syrian children," said Takil. "In addition to this, Syrian children have social activity possibilities in the camps, like football and basketball. At the same time, more than 5,500 Syrian citizens are receiving education and learning Turkish."

The UNHCR estimates that around half of all displaced Syrians are children and adolescents.

"One of my friends was shot in the chest. I was asking him, 'what's wrong with you?' but he couldn't speak," sixteen-year-old Sayed told the United Nations Children's Fund (UNICEF), after he had fled to Turkey in April. He explained how two of his friends, who were seriously wounded, had been refused treatment at a government hospital. They eventually received treatment in one of Syria's secret medical clinics, however, died shortly afterwards.

Meanwhile, at least 1 million people in total are in need of humanitarian assistance inside Syria.

"We made an agreement with the Syrian government last week, and we have produced a response plan to meet these needs," said Laerke. He went further by stating: "We are now in the process of establishing ourselves on the ground. We need people on the ground so we can implement this plan, this is a work in progress."

Because of the volatile situation inside Syria, the UN has not been able to reach all of those in need. However, they have made an agreement with the Syrian government to establish field presences in four of the main flash-point areas, which include Homs, Hama, and Idlib.

"As we all see in the news, we have fighting and killing going on in different locations of Syria every day. We cannot put humanitarian workers in that line of fire," he said. "If the UN Department for Safety and Security finds that we have reached a level in which we cannot ensure the life and safety of our staff, then they will be pulled out. Either relocated to some other place inside the country, or, evacuated to another country where they will be safe."

While diplomatic tensions between the United States and Russia over arms exports to Syria is intensifying, the violence in the country is showing little sign of receding. The horrifying violations against children in Syria are being uncovered bit by bit, but what has already been revealed could prove itself to be only the tip of the ice-berg.