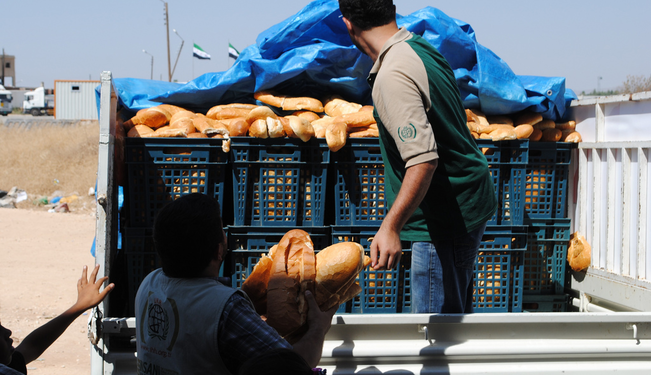 Syria’s neighboring countries are increasingly running out of resources to care for the masses of refugees.

As the White House continues to mull over what it means, exactly, to breach the “red line,” Syria seems to be falling apart at the seams.

The seams, in many regards, are what the world is watching. The continued, growing violence in Syria is steadily spilling over to its bordering countries (Turkey, Iraq, Jordan, Lebanon and Israel), particularly in the form of its fleeing citizenry.

Unfortunately, the region is not new to refugee crises. Not long ago, Syria was home to about a million Iraqis seeking refuge from their war-torn country. Now, those refugees, and Syria’s own, are making their way out of the country, seeking safer territory.

Syria’s continued crisis is now well into its third year. Since the beginning of the armed rebellion against Bashar al-Assad and his Ba’ath Party, the conflict in Syria has been dubbed a civil war. Yet, the crisis in Syria does not conform to the insular nature that the term “civil” implies.

From early on, regional spectators worried that the conflict in Syria would spill over to Iraq, Damascus’ now not-so-stable neighbor. Since 2011, several of Syria’s neighbors have also fallen into instability: Hezbollah’s increased military involvement in the situation in Syria has flared up tensions in Lebanon; Turkey, a staunch backer of the Syrian opposition, is currently dealing with sustained protests against Recep Tayyip Erdogan and the government.

The margin of error for Syria’s neighbors is slim, and the idea of a sustained flow of refugees into countries already worn thin is not very promising.

By all accounts, the crisis in Syria is joining an overwhelmingly crisis-riddled region — which becomes increasingly problematic, given that Syrians, en masse, are fleeing their country’s growing instability.

As of mid-June 2013, there are more than 1.6 million Syrian refugees, around 1 million of them in Lebanon and Jordan. On average, 8,000 Syrians are crossing into Egypt, Iraq, Jordan, Lebanon and Turkey each day. The refugee numbers are a rough account of both registered and unregistered people crossing over porous borders into the neighboring countries.

The United Nations High Commissioner for Refugees (UNHCR), Antonio Guterres, this month noted that since the beginning of 2013, over 1 million Syrians have registered as refugees. Most alarming is that women and children make up three quarters of the refugee population. In a region that increasingly can barely sustain itself, it is unimaginable where, and how, millions of displaced persons will end up.

The stress that the refugee exodus from Syria is putting on its neighbors is not easily overlooked. This month, the United Nations, as a global body, launched the largest humanitarian appeal ever — asking donor countries for $4.4 billion to help those suffering, both within, and outside of, Syria.

“We expect that we might reach 3.5 million refugees by the end of the year,” the UN High Commissioner for Refugees Antonio Guterres told a news conference in Geneva. Around 1.6 million people have already sought refuge in Jordan, Lebanon, Turkey, Iraq and Egypt.

“If the fighting doesn’t stop, we risk an explosion in the Middle East for which the international community is simply not prepared,” Guterres said, noting that Lebanon and Jordan in particular have shouldered the greater burden, hosting about 500,000 Syrian refugees each.

In recent weeks, Lebanon and Jordan both joined the United Nations in their appeal to donor countries for around $400 million each in an effort to guarantee proper care for the refugees, while they take up residence in their countries.

The conflict in Syria is a taxing one: along with the blatant humanitarian crisis it is leaving in its wake, it is also causing significant socioeconomic strain both in Syria and outside it. The Zaatari refugee camp on Jordan’s northern border with Syria is thought to be the largest camp for Syrian refugees. It is “home” to around 130,000 people.

While Jordan has an official policy of not turning away refugees entering the country, their accommodation is causing significant strain domestically. Jordan was already home to Iraqi and Palestinian refugees (Jordan was hosting 750,000 refugees before the Syrian crisis), and now with the steady flow of large numbers coming from Syria, Jordanian authorities worry about how they will provide for their citizenry, as well as the refugees they are hosting.

“This crisis is affecting Jordan on every level, healthcare, economically, education, all our sectors are being stressed,” said Jordan’s interior minister, Hussein Majali.

The Syrian crisis, and its fueling of the number of refugees, is “threatening the country’s national security,” according to Jordan’s prime minister, Abdullah Ensour. Within the next six months, the number of Syrian refugees entering Jordan could grow to the equivalent of one-fifth of Jordan’s population.

Eventually, by nature of refugee camps, some, if not all refugees try to make their way into the main cities to seek work and stable living accommodations. It is important to note that refugee camps are thought more of as holding spaces, rather than permanent areas of residence — although many do end up living in these camps for several years.

While some are able to find jobs and housing within their host country, the rise in people seeking work, in turn, increases the pool of competition per job that the country has to offer. Jordan, along with other countries in the region that have opened their borders, is now looking at its ability to properly absorb these new refugees. Funding — particularly the $400 million asked of each UN donor — would be of great assistance with providing necessary food, shelter, and medical attention for the refugees.

Yet, it does not, and will not alleviate the mutual frustration amongst both the Syrian refugees who likely knew a better life back home, and those native to the host countries (Jordan, Lebanon, etc). It is not hard to imagine that a Jordanian or Lebanese worker, who has been struggling to find a job, would become resentful once they have to share the job market with a large number of Syrians fleeing their country. Jordan already has a 12% unemployment rate — the influx of refugees will no doubt only exacerbate the problem.

In fact, just this month, a Jordanian official said that nearly 60,000 Syrian refugees that were living in the Zaatari camp in Jordan left to go back to Syria, citing the harsh living conditions in the camp as the reason. The return is seemingly part of an unfortunate new thinking among a certain number of refugees — returning to Syria and all of its instability is a better option than living in the unsustainable limbo in a refugee camp.

The Middle East has been slowly unraveling — accelerated primarily by the spark ignited by the Arab Spring. The situation in Syria has unarguably turned up the heat. The social and economic strains are only another added part to the grave humanitarian situation that the violence in Syria has created.

Sooner, rather than later, something must be done. The violence in Syria must be addressed at the top and the violent, tyrannical regime at the hands of Assad must be ended. It seems that to do so, it will take more than rhetorical threats of a moving “red line.” Action, past rhetoric from podiums, must be taken.

Greater political pressures should be placed on countries that are aiding the Assad regime — particularly those that are US allies, such as Russia. The United States should take the lead in providing such pressures (diplomatic and economic).

Tactical measures should also be taken in an effort to ensure that Syria’s neighbors do not succumb to the pressures of hosting refugee populations. NGOs, as well as allied governments (including the United States), should also provide both specific civil, as well as economic, assistance to those countries. It is imperative that the host countries’ infrastructure does not dissolve in an effort to absorb the influx of refugees.

Very few things are certain in these circumstances; yet, what is blatantly clear is that the region is in crisis and the world must help in whatever way possible to lessen the pressure, before it explodes.