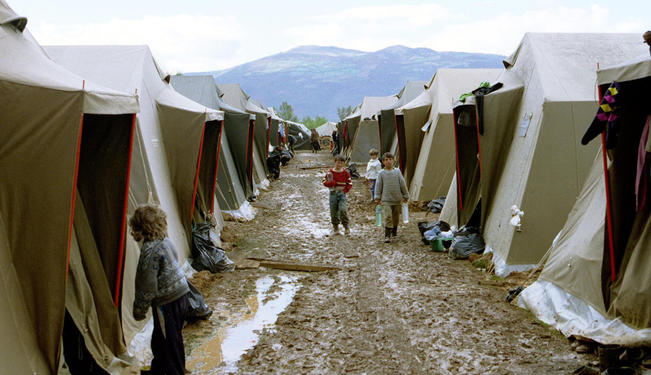 The registration of refugees is designed to protect. But its system of conditional aid has distanced the concept of aid from its universal roots.

Everyday hundreds of thousands of men, women and children are forced to flee their home countries in search of refuge. Leaving with little more than the clothes on their back, they embark on treacherous and often dangerous journeys in search of solace and protection in safer lands. However, those that manage to survive the journey and escape the war, conflict and violence they once witnessed, now face a new challenge: the struggle for recognition.

Typically, when a crisis occurs and an influx of refugees enter a host country, common protocol calls for a long and meticulous registration process. The host government should set things in motion and will take full responsibility for monitoring all incomers. Nevertheless, more often than not, the UN Refugee Agency (UNHCR) will aid in operations, opening registration offices and carrying out the registration processes.

The fine details of the registration processes are vast but, in short, refugees are put through a series of long interviews in which staff gather data and record the status of the individual concerned. Information such as country of origin, sex, age, education, family circumstance, health and proofs of identity are gathered and rigorously assessed. If, after long and careful consideration, the individual is deemed to be in a state of need they will be registered as a refugee and considered by the UNHCR and host authorities to be a “person of concern”.

This process from start to finish includes many visits to the registration office and can take anywhere from a few weeks to a year, dependent upon the number of refugees flooding in at any one time and the efficiency of the office in question.

Of course, it cannot be denied that there are many benefits to the registration system. Once an individual is recognised as a registered refugee, they automatically gain status within their host country and, as expected, with status comes benefit. Not only are they afforded aid like medical care, shelter and food rations but by identifying and recording the data of refugees, the host government, UNHCR and other NGOs are able to better understand their individual needs, granting them appropriate access to the services and solutions they require. They are able to control the distribution of aid to areas heavily populated by registered refugees, unite separated families and forge a protection relationship that is more readily tangible. In addition to this, ration distribution becomes more manageable, reducing the risk of non-refugees receiving un-needed aid.

So, you may be thinking that the registration of refugees is more than just a head count, more than a bureaucratic way to control aid. It is clearly designed to protect refugees. Well, not quite. Even given the many positive aspects of registering refugees, in many cases the vast majority remain unregistered. For example, according to some reports, an estimated 40% of Syrian refugees in Lebanon remain unregistered today, and 63% of those receive no assistance. If, by registering, they are afforded greater benefits and protection, why are they not signing up?

The answer is two-fold. There are those that try to register but cannot, and those whose fear of registration prevents them from doing so. In the first case, administrative inefficiencies are ultimately to blame. Understaffed registration offices mean that thousands of people are left unseen and turned away. Inefficient processes leave many people in limbo for months without contact, severe delays are caused by a lack of ID, and mis-located papers or insufficient information and scarcely located offices exclude those who are unable to travel.

Many refugees wait for hours each day in an attempt to be seen. They are often redirected to an alternative office only to be refused entry when they arrive. In the second case, many refugees fear that by registering as a refugee there is a significant possibility that they will be returned back to their home country. This is especially the case when huge numbers of refugees enter a host country which is hostile or one that imposes strict caps on the number of refugees allowed in.

A Game of Numbers

By automatically obligating refugees to enter a process of categorisation in order to receive government or UN aid, an insufficient system of conditional aid has been created. Refugees are entitled to many more services, facilities and aid on the condition that they are formally registered, and thus recognised by the host government. However, for a process designed to make the distribution of aid fairer, this obviously seems to have missed the mark. Surely, if the goal is to protect refugees, reduce their vulnerability and afford them the healthcare and shelter they need, large numbers should not be marginalised for their failure to fill out a few forms.

The registration process has, in essence, distanced the concept of aid from its universal roots, creating categories and divisions that qualify entitlement. People have become numbers, and lives have become check boxes.

In order to change the awful plight of refugees, we must offer them an unconditional relationship of protection. Registration should remain for all its positive benefits but it should be stripped of its power to afford aid. Only then will the struggle for recognition mean a lot less than life or death.