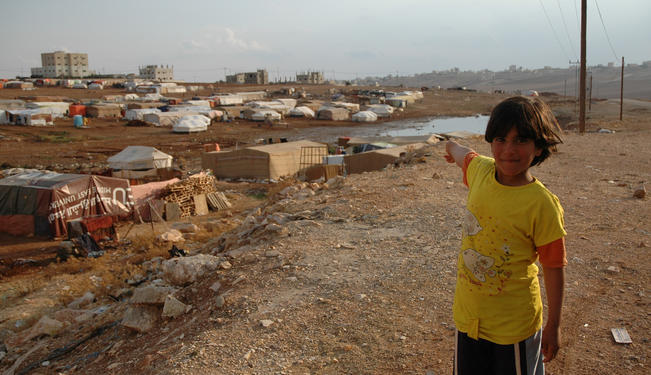 It is important to understand the impact of Syrian refugees on Jordan. [Note: Read part one here.]

Living conditions at the Gaza camp in Jerash are poor and employment opportunities are restricted mainly to private and informal sectors. According to a public sector official in the Gaza camp: “The Syrian situation is better than [ours, Gazans]… first [they have] a nationality and second they have the UNCHR [United Nations High Commission for Refugees].”

Business owners prefer employing Syrians because “they don’t cost them as much, [they] tolerate more and complain less… they [also] normally work three or four shifts with no raise or overtime.”

Moreover, hiring Syrians is more attractive because employers do not need to issue contracts for them, which means they are not entitled to any benefits. The general preference for employers to hire Syrians over Jordanians has caused growing resentment toward them by the host population.

Many women from Gaza camp work in the agriculture sector in Jerash. With increasing demand by farm owners to hire Syrians, more women are competing for work opportunities causing further tensions with the host population. One unemployed Gazan woman complained: “They [farm owners] employ Syrian women because they are beautiful and have beautiful eyes.”

The minimum wage in Jordan was set to 190 Jordanian dinars ($270) in 2013, whereas for migrant workers it is 110 Jordanian dinars ($155). Although inspection campaigns are carried out to enforce labor law regulation on business owners, they are inadequate. More effective mechanisms are needed to prevent illegal employment of Syrians in Jordan and hold employers accountable for any violations.

Increased competition in the agricultural sector has led to a depreciation in wages as workers are getting paid as low as 150 Jordanian dinars — approximately $210 — for 30-days of work. Because of the urgent need to earn a living, Syrians have been forced to accept cheaper pay than the usual amount paid to locals and even Egyptians.

As one gender specialist mentioned during an interview: “1 Jordanian dinar ($1.41) amounts to 1,500 Syrian pounds ($10.43), which is more than enough for them.” However, the impact of the civil war has seen a rise in the purchasing value of commodities. The exchange rate of the Syrian pound against the US dollar has depreciated from 44.57 in October 2010 to 143.40 in February 2014.

This depreciation in the Syrian pound is causing inflation; prices of basic goods are increasing and life in Syria is becoming more expensive. The overall cost of food in Jordan also increased by 5% between 2011 and 2012.

In addition, there is the perception that many Syrian families live together in homes comprising of several breadwinners, which is why they accept lower wages. As one Palestinian Jordanian said:

The Iraqi and Syrian Refugee Population

Some claim the increase in prices of commodities is a result of the Syrian influx, while others blame it on the scarcity of job opportunities in Jordan. The situation was similar following the Gulf War, when an estimated 100,000-200,000 Iraqis fled to the country.

There is a common belief that most Iraqis who entered Jordan following the Gulf War had more wealth than the Syrian refugee population and were able to invest in the country. Iraqis brought with them skilled expertise, whereas the majority of Syrians who have come to the country are poorly educated.

A recent survey conducted on Syrians who fled to Jordan following the Syrian Civil War highlights that 83.5% are male; 80.9% are below the age of 40; and 83.8% have neither gone to school, nor have they reached primary levels of education. Moreover, 68.6% are married and 81.9% have migrated with members of their families. Although many Syrians in Jordan are actually skilled workers in crafts trade and the services sector, the survey shows that 80% of them are unemployed.

Despite the increase in numbers and size, Syrian investment in Jordan remains much smaller than that of Iraqis, which is still ranked first in number and size in the list of non-Jordanian investments, whether Arab or foreign.

The majority of Syrians living outside the camps are in the northern governorates of Jordan, where poverty levels were among the highest in the country even before the Syrian refugee crisis. There is a general resentment amongst the host population due to the overwhelming assistance given to Syrians through the international community while disregarding urgent needs of Jordanians.

In response to the growing tension between refugees and the host population, government authorities have required that only 10% of a Syrian investor’s workforce comprise of Syrians. Moreover, all relief organizations are required by law to allocate at least 30% of their assistance to vulnerable Jordanian citizens. As one Jordanian East Banker mentioned: “I swear, some people in Jordan are living on the brink of death; take it from me, now all the support goes to Syrians.”

Some perceive Syrian participation in the labor force as unnecessary due to the humanitarian assistance they already receive. One Gazan young man claimed: “Now you work for 10-15 Jordanian dinars [$14.15-21.22], you have to pay for everything; the rent, the medicine and… as for him, he has everything provided, the refugee.”

Other criticisms highlight the overdependence of Syrians on aid. As one Gazan woman said when comparing “her people” with Syrians: “When we came to Jordan, we planted our food and didn’t beg for money or food.” Another unemployed Jordanian described the country as a “Middle East resort” for refugees.

Indeed, aid to Jordan has increased dramatically following the Syrian Civil War. The Financial Tracking Service, an initiative by the United Nations Office for the Coordination of Humanitarian Affairs (OCHA), indicates an increase in humanitarian assistance from $50 million in 2011 to $668.8 million in 2013.

Nevertheless, according to figures from 2013, humanitarian agencies were only able to offer monetary assistance to 22,000 Syrian families due to insufficient funding. In Syria, it is estimated that up to 75% of the country’s population will require humanitarian aid in 2014.

A political solution in Syria is improbable in the short- to mid-term. In fact, the deterioration of the situation is pushing more and more Syrian families to leave Syria and seek refuge in neighboring countries such as Jordan. The Syrian refugee crisis places increasing strains on the country’s economy and social structure.

There is a vital need to address the problem of growing tension in Jordan between Syrian refugees and the host population. Finding successful solutions to displacement is crucial for the development of Jordan’s social, economic and political agendas.

More importantly, coordination at all levels is needed. Evidence-based studies to evaluate the progress in reaching and maintaining such standards need to be incorporated into the cycle of accountability and performance appraisal on the short, medium and long-term.