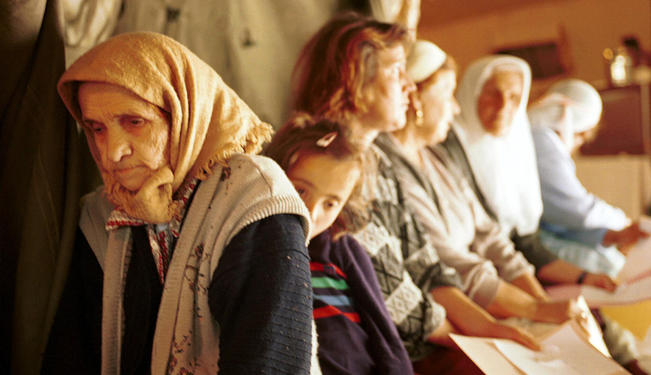 Religious teachings and practices cannot be ignored if we are to effectively protect the rights and wellbeing of refugees.

During my time as country director for Muslim Aid in Sri Lanka and Bangladesh, I dealt with refugees and internally displaced persons (IDPs) fleeing man-made and natural disasters. Very often, I came away from each project thinking the same thing: “We are not doing enough”.

This is not aimed as a criticism for the sterling work many humanitarian agencies undertake during emergencies and in trying circumstances, but there is a gap in the work that is currently being done. This gap is the failure to recognise the role of religion in the protection of refugee rights, as well as a failure to recognise the traumatic spiritual experience that many people, who are forced out of their houses losing everything of material value, often face.

Being made a refugee is possibly one of the most testing times of one’s faith and patience — barring the loss of a loved one. However, because of the nature of how international non-governmental organisations (INGO), donors, humanitarian agencies, and faith based humanitarian agencies view the concept of faith — as an elephant in the room — the role of religion and spiritual counselling are not considered for refugees. Often, the latter are reluctant to engage in this, and rightly so when there have been instances of abuse involving faith based organisations preying on the vulnerability of refugees and trying to proselytize. Hence, the blanket unwritten rule that comes into operation: “we don’t do faith”.

It is also not helped by the fact that current debates on migration and displacement largely exclude discussions of religion whilst in refugee studies, “religion receives most attention for its role in violent conflicts and the politicization of religious identities”. These gaps in academic research tend to influence government policy towards refuge and asylum, which in turn ignores religious influences on forced migrants.

This is a shame, because part of the counselling and healing needed for refugees has to go beyond the emotional and psychological. Many of the people who are made refugees come from religious and spiritual backgrounds, and in order to restore them to some normalcy, we have to address the cracks in their faith as a result of their traumatic experience. In addition to this, and more importantly, by failing to consider religion as a fundamental factor in the protection of refugee rights, these academic scholars ignore the fact that religious beliefs and practices can be crucial to many refugees’ wellbeing once they have been granted asylum, providing a sense of security in strange and often threatening environments.

Largely because a lot of my work has been centred around Muslim displacement, and being a Muslim myself, I was curious to see what Islam had to say about this.

We are constantly told in history lessons about the migration of the early followers of Islam, and in the Qur’an, the stories of the lives of the Prophets Abraham and Moses (upon whom be peace), are also testimony to the fact that migration and seeking refuge are part and parcel of spiritual development.

Thus, based on an initial study on the subject, I was curious to delve into the history and theology of Islam and migration. Bearing in mind that refugees from Syria could soon number close to three million and that since 2007, Muslims have constituted the largest refugee populations worldwide with nearly half of the world’s refugees coming from Muslim countries, whilst a significant amount of the total IDPs are displaced in the Muslim world, it seems quite a timely topic to try and address. Especially as one of the current issues seems to be the lack of protective mechanisms for refugees in the Muslim world — where most Muslims seek asylum.

The concept of migration, or hijrah, is central within the teachings of Islam and its history, especially in the case of the Prophet Muhammed (peace be upon him), who fled persecution in Mecca and sought refuge in Medina in 662 AD. This hijrah came to symbolise the movement of Muslims from lands of oppression to those of Islam (although in current discussions this has been elaborated by scholars to lands of safety). Moreover, the hospitable treatment of Muhammed by the people of Medina embodies the Islamic model of refugee protection contained in the Qur’an. Thus, individuals not only have the right to seek and be granted asylum in any Muslim state, but it is the duty of Muslims to accept and protect these refugees for as long as they seek protection. Here, it is interesting to note that in comparison to modern refugee law, hijrah offers a broader definition of refugees and gives individuals, rather than states, the right to the determination of asylum.

The Qur’an speaks explicitly about the issue of asylum seekers and refugees:

“And if anyone of the disbelievers seeks your protection, then grant him protection so that he may hear the word of God, and then escort him to where he will be secure.” [Chapter 9, Verse 6]

The concept of sanctuary, as is popular in Christianity, is also affirmed within Islamic law and history. On the conquest of Mecca by the Prophet Muhammed, anyone who sought refuge in sacred spots or the home of one of his companions was safe and secure. Thus, this is usually extended by scholars of Islamic law to conclude that asylum is not confined only to sacred places – it is also granted in homes and designated communal places under the protection of Islam, with the responsibility of asylum being provided without discriminating between free persons and those who are enslaved, rich and poor, men and women, Muslim and non-Muslim. This responsibility is formalised in the fourth chapter of the Qur’an:

“He who emigrates in the path of God will find frequent refuge and abundance.” [Chapter 4, Verses 97-99]

This responsibility is known as aman, or trust/safety, which encompasses the rights of refugees and asylum seekers and the duties required by their hosts. Aman also refers to the refuge and safeguard offered to non-Muslims, even if they are in conflict with Muslims. It requires that host populations facilitate the voluntary return of refugees to their places of origin when considered safe. Such refuge remains inviolate, even if the person who is being offered protection is in a conflict against Muslims.

However, principles in Islamic law regarding refugee assistance and protection remain largely ignored in academic and political discourse, and certain challenges need to be discussed. For example, Islam recognises two types of rights: rights that humans are obliged, by virtue of being the creations of God, to fulfil and obey, and rights that they are entitled to expect from their fellow human beings.

This may appear to have some contradiction with the Universal Declaration of Human Rights (UDHR), where the latter corresponds to what are elsewhere termed "human rights". The former are rights that stem from, and are obtained through, belief in God and religion. In this concept, only God truly has rights and the rights of humans are understood as their obligation to abide by God’s commands. They are, first and foremost, the rights of individuals to abide by and adhere to the laws that God decreed and are only possible through this belief system; thus potentially excluding people who do not believe in God.

Another potentially difficult point to reconcile is the principle of equality between men and women. The UDHR affirms unconditionally the complete equality between the two sexes. The discussion in Islamic law does offer different rights and obligations to men and women, which means that in the situation of the rights of restitution of property to refugees, for example, the following question may be raised: What are the implications for the many female-headed households trying to survive or rebuild lives and livelihoods after conflict and displacement?

The Role of Religion

What this brief discussion on Islamic rules and regulations shows is that there are valuable sources for the protection of the rights of refugees, migrants, and asylum seekers from Islamic sources. No doubt Muslim countries and faith based organisations need to understand them fully in order to deal with some of the crises affecting the Muslim world today. More broadly speaking, religious teachings and practices cannot be ignored when dealing effectively with refugees. Space needs to be provided for these discussions and it needs to be considered at all levels. As we commemorate World Refugee Day and Week, we need to now think about new paradigms for dealing with refugees which involve engaging in faith, religion, and spirituality issues.

*[Note: This article is an adapted version of an earlier report by the author for Islamic Relief Worldwide and the UNHCR.]