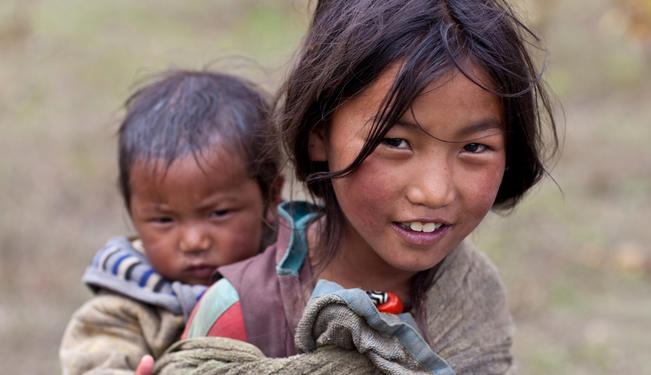 Refugees are created by untenable circumstances within boundaries formed by the West.

Late last fall, I was sitting outside in our farm yard in Vermont, just south of the Canadian border. My wife and I were remarking on the influx of the Common Red Poll, a bird not often seen in such numbers where we live. Upon further investigation, it seems that what had been a rather mild drought for us had been more profound and enduring, deeper into Quebec. There had not been enough seed to sustain the population up there.

That same fall, inside our home, on our monitors, I had noticed two other related phenomenon gaining momentum. The first pertained to "resilience,'' a new branding effort by the principal Western purveyors of foreign assistance, meant to rally consensus among the liberal democracies that "controlling the narrative" must indeed yield to ''influencing the narrative." This meant that development interventions must henceforth shift from the West doing what it perceives to be necessary in vulnerable countries abroad, toward supporting whatever homegrown capacity exists to fare for itself in times of distress. Here is what one of the leaders for this ''call to action'' (Helen Clark-the head of the United Nations Development Program) said in  April 2012:

"At UNDP, we see development challenges in the 21st Century as different in nature, scale, and scope from those of the past. If our world is to be one in which poverty is eradicated, and inequality reduced; and where growth is inclusive and production and consumption do not break planetary boundaries; and if we are to be effective in combating the effects of climate change; we need to look beyond our traditional interventionist logic to harness the agency of people, their communities, and institutions. It is this logic which has led UNDP to encapsulate its mission statement in the simple phrase: Empowered Lives, Resilient Nations. This speaks to both means and ends. Empowered people can build resilient nations."

She went on to say:

"In Singapore recently, I spoke on the importance of governance for sustainable development, pointing out that the latter is neither attained nor sustained if the quality of governance is poor. That could be the case either because a state’s institutions lack capacity or are undermined by corruption and abuse of authority, or because the state itself is so fragile that it cannot give effective guidance on policy of any kind. Building resilience for sustained and sustainable development benefits from governance which is active, effective, honest, fair, and also, in my opinion, responsive and representative."

Well, quite a mouthful. In fact, it is mostly a new branding for what the Western development stalwarts have proclaimed for most of the time I have been at work in this field (since 1981). Moreover, there are compelling reasons why Western nations, in their own self interest, are in no rush to move from ''control'' to "influence.''

And then, later that same year, I surfed upon the figure of "Starvin' Marvin" and Michael Huemer, a philosopher at the University of Colorado. Now, I believed, I was getting closer, much closer to "Right Relations" as they apply, in this instance, to refugees. Read on for an excerpt from Heumer:

"[Marvin] is very hungry and is trying to travel to the marketplace to buy some food. Another person, Sam (Sam has a large number of nephews and nieces, so we'll call him Uncle Sam), decides to stop Marvin from going to the marketplace using coercion. He goes down there with his M16 and blocks the road. As a result, Marvin can't trade for food and, as a result, he starves. So then the question is, did Sam kill Marvin? Did he violate his rights? Almost anyone would say yes, Sam acted wrongly. In fact, if Marvin died as a result, then Sam killed him. It wouldn't be that Sam failed to help Marvin. No, he actively intervened…This is analogous to the US government's immigration policy. There are people who want to trade in our marketplace, in this case the labor market, and the government effectively prevents them from doing that, through use of force."

So we get to borders, to boundaries, to walls and fences — and the savants of Western development are telling the poor and oppressed to "hang in there." To take a lickin' and keep on tickin', because in 40 years you may have glimmers of good governance, in 50 years you may contribute to the prevailing global sciences, and in 60 years you may see less of your topsoil flow into the sea around you.

Meanwhile, the West, which drew your borders for you ages ago, stops you — the refugee — from invigorating its own lands; parks you in squalid camps at the borders; interdicts you at sea, and throws you a bone. The West tells you to be resilient, while all of preceding history indicates that resilience means migration — for man and beast. Meaning, not accepting life within those borders. Meaning, flying to opportunity. And meaning, speaking now as an American, the recipient hegemon is equally  denied enrichment by the new blood which has always been at the heart of the advancement of its Bill of Rights and open prosperous markets. And meaning that the creation of diasporas, which provide far more investments and knowledge transfers to those left behind than any overseas aid endeavor with its accompanying rhetoric, is thwarted.

Refugees are created by untenable circumstances within boundaries created for them by the West; created to the West's own detriment and to the enduring plight of those living in God forsaken places.

I am now, today, in Port au Prince, Haiti. This morning, I had a discussion about resilience with an unemployed, ambitious young man. I asked him what resilience meant to him. He answered quickly, "Miami.'' Not unlike those Common Red Polls flying into our farm last fall, he would go where there was seed to eat — would, if it were not for the United States Coast Guard standing ready to turn him back.