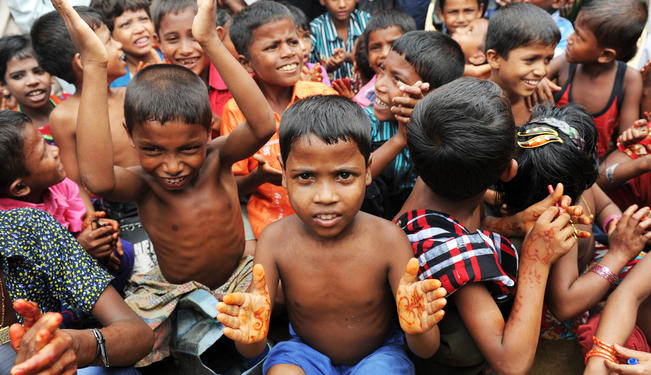 Rohingya Muslims need to be incorporated into Myanmar as citizens with equal rights.

Internally displaced in a country that officially demotes them to the status of undesired immigrants, the Rohingya Muslims of Rakhine state have faced a long and recently publicized history of persecution.

Historically Muslim, the Rohingya find themselves as a minority amongst an Arakanese Buddhist majority. There are approximately 1 million Rohingya Muslims in Myanmar; roughly 5 percent of the total population. Though not the only Muslim population in the country, they make up the largest concentration in any single region. The capital of Rakhine state, Sittwe, once boasted a Muslim population of 73,000. Today, fewer than 5,000 remain.

This demographic shift in the capital is representative of the whole region. This begs the question, where have these people gone?

According to Refugees International, approximately 229,000 Rohingyas reside in Bangladesh, with only 29,000 in official refugee camps. The other 200,000 live in unofficial camps. In Myanmar, there are officially around 800,000 Rohingya Muslims, at least 120,000 of whom are internally displaced. Others have attempted to flee to other countries such as Thailand, Indonesia, and Malaysia.

Wherever they go, these refugees are met with mixed receptions. Thailand, also a Buddhist majority country, has documented problems with its own Muslim minority in its southern provinces. Moreover, although its immigration facilities are allegedly saturated, Thailand has been accused of sending away boatloads of Rohingya asylum seekers — back to a hazardous fate at sea.

Indonesia and Malaysia, both Muslim-majority countries, offer sympathy to their fellow Muslims, but nevertheless shrink at the idea of opening their doors to an influx of stateless refugees.

To top things off, as a minority denied the same rights of other citizens of Myanmar, many Rohingyas have struggled for access to education. They are thus stuck in a cycle of poverty and lack of opportunity not only in Myanmar — the country they have called home for their entire lives — but also in these other countries as they don the mask of the refugee.

In the aftermath of large scale communal violence between Rohingya Muslims and Arakanese Buddhists in 2012, the plight of the Rohingya has held moments of attention in the international media spotlight.

This spate of violence, however, represented only the tip of the iceberg. The problem has been brewing for decades. The country’s 1982 citizenship law, put in place by the ruling military junta, set standards requiring one’s ancestors to have resided in the country prior to 1823. As a result, it has been difficult for Rohingyas to obtain full rights as citizens.

The general view of the Arakanese is that they are the sole original inhabitants of the area; Rohingyas are considered illegal Bangladeshi immigrants. The Rohingya claim to being one of many legitimate ethnic entities of Myanmar are thus painted as irrelevant. On one hand, the Arakanese claim may hold some truth, as during the British rule of Burma (1824-1948), the number of agricultural laborers from Bangladesh to Rakhine state greatly increased. On the other hand, there is proof that there have been Muslims in the area since at least the 15th century.

Either way, the majority of Rohingyas are currently stateless. Those who attempt to escape to Bangladesh are forced to turn back, and whilst those who remain in Myanmar can, in theory, obtain citizenship so long as they meet the criterion of being third generation ”immigrants,” the requirements state dubiously that they must “be of good character” and “sound mind.”

Refugees: Both Rohingya and Arakanese

Since 2012, the bleak situation of Rohingyas has become an issue of international interest. According to the Myanmar government, 211 people have been killed in Rakhine since June 2012; although Rohingya activists estimate the number to be closer to 1,000. There are 140,000 internally displaced persons (IDPs); 94% of whom are Muslim.

The majority of these people now reside in refugee camps that lack sufficient humanitarian aid, offering refugees little more than a hopeless situation. International charitable organizations fear working in these camps as harassment and violence against those aiding Rohingya Muslims is common.

Largely left to their own devices and dependent on private aid, much of which is coming from Yangon Muslims, there is fear that youth growing up in these conditions risk being seduced into extremism.

The government’s response to problems — which includes proposing to support the resettlement of Rohingyas in other countries — has not contained the violence, which is instead spreading to new areas and spilling across borders. Meanwhile, Rohingya refugees in Rakhine are forbidden to leave their camps.

Contrastingly, the 7,300 ethnically Arakanese IDPs are free to travel and have been assured they will soon receive new permanent housing; a comfort not offered to Rohingya refugees. This may be partially due to the fact that the smaller number of Arakanese refugees is easier to deal with. However, it fails to explain or justify the neglect of social care within Rohingya camps.

The extreme poverty of the state affects not only the Rohingya, but also the Arakanese, who, as the largest ethnic group, number around 3 million.

Despite being one of the most resource rich areas of the country, Rakhine is the second poorest state. Although divided by religion (Islam and Buddhism), this itself is not the root of the problem. In Myanmar, there are officially no restrictions built on the basis of religion. Islamaphobia, nonetheless, seems to be on the rise in Myanmar, as Muslims of other ethnic groups in different areas have been targeted by violent extremists. On the other side, there is evidence that since 2000, links have developed between some Rohingya extremists and al-Qaeda.

The Rakhine region has a long history of multiculturalism. The Buddhist Mrak-U Kingdom ruled from 1429 to 1785, and boasted a multicultural court with Muslim and foreign courtiers. In fact, the court was dependent upon Muslim trade and mercenaries, which is highlighted in the adoption of Muslim titles as well as Theravadan Buddhist ones — at least until 1622.

Despite often being covered internationally with language defining the violence as a religious issue, the true root causes seem to lie elsewhere. Poverty creates divided social strata, while ascribing moderately to a religion has far fewer implications.

In Rakhine, where the livelihoods of the majority depend on agriculture — mainly the rice crop — land ownership has always been a source of tension between different communities. Therefore, Myanmar’s issues seem primarily about socioeconomics. Even then, the riots of 2012 have only worsened the economic situation for the Arakanese, who now face a shortage of Rohingya laborers. And although not primarily religious in nature, as Rakhine falls increasingly further behind in terms of economic development and redistribution of wealth, the next generation could see divisions along religious lines grow.

If this indeed takes place, it will undoubtedly make the situation far more difficult to resolve. This would not only have grave implications for Rakhine, but it would also seriously threaten Myanmar’s current path to democracy.

The government’s two-child policy for Rohingya families, implemented in 1994, has been condemned as discriminatory and against human rights by the United Nations, Human Rights Watch, and Aung San Suu Kyi.

Those supporting the policy argue that Rohingya families have tended to bear more children than they can support, and that the policy is therefore in their own interests. However, as has been the case in China, such policies can have dangerous repercussions, including the rise of unsafe abortions — resorted to in order to avoid the harsh repercussions of breaking the law. The law also misses the target in another respect: It is the problem of poverty and, in turn, the lack of education and healthcare development, which needs to be tackled first and foremost.

The international community has reacted with great concern over the situation of Rohingya Muslims. Although Myanmar has recently made political strides towards democracy with the election of the first civilian president, Thein Sein, in 2011, after a near half century of military rule, the country has remained blighted by its human rights record. Notably, in 2012, Myanmar was re-designated a Country of Particular Concern (CPC) under the International Religious Freedom Act.

It remains difficult to say what exactly the international community can do, however. Economic sanctions have been enforced in the past by the US, EU, and ASEAN countries. But in 2009,  Hilary Clinton pointed out that economic sanctions were not constructive in stopping human rights violations or encouraging the democratization of the country.

Apart from this, Myanmar’s main trading partners in the past have been Thailand, India, China, and Japan, thus rendering the effectiveness of US economic sanctions questionable. This is not to say that the international community cannot have a positive effect on Myanmar, but this would perhaps best be done by engaging in socially responsible investment and social initiatives, rather than economic punishment.

The future of Rohingya Muslims is currently hard to predict, but the solution to work towards should be normalized pluralism. The Rohingya Muslims first need to be properly incorporated into a modern Myanmar as citizens with equal rights. President Thein Sein has recently stated that tackling poverty is one of his top priorities; offering micro-finance loans to poor households being part of the plan.

Such initiatives will remain unavailable to the Rohingya as non-citizens, however, so they will naturally be excluded from Myanmar’s economic development and will continue to fall further and further behind.

Myanmar can no longer ignore its Rohingya population; the future generations need and deserve to be educated and treated as equal citizens. Their current stateless situation will only fuel the creation of a fully marginalized population stuck in a cycle of poverty, social and economic exclusion, and potential sparks of religious extremism.