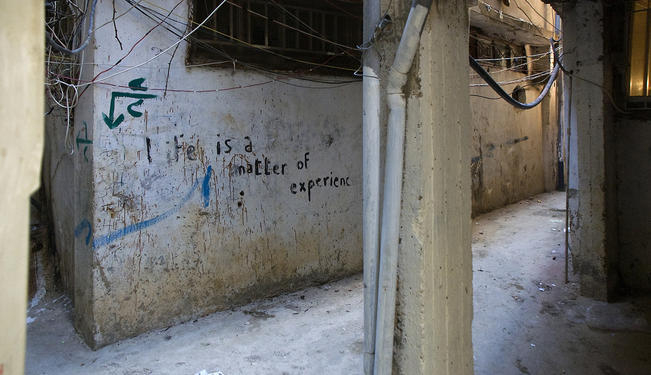 Thousands of Palestinian refugees have fled Syria amidst the ongoing civil war. However, for them, the fate of discrimination and inequality in Lebanon is just as dire as the fate of violence in Syria.

Meesar Lahan’s personal story represents thousands of Palestinian refugees filtering into the Shatila refugee camp of Lebanon from war-stricken Syria. Their move to Lebanon represents a second displacement (the first being from Palestine), and many of these refugees are giving up hope, some even considering a return with their families back to Syria. The labyrinth of discrimination and segregation specific to the already existing Palestinian refugee population of Lebanon has made many of the new arrivals feel that Syria, despite the violence, offers more dignity and a greater ability to live within their economic means.

Between Violence and Discrimination

In the narrow passageways of Shatila, one of Lebanon's most dire refugee camps, Meesar Lahan gazes through weary eyes at the trapping vertical slums that surround her. In early September, she fled her violence-ridden home in Syria's Yarmouk Camp, the largest Palestinian refugee camp for the approximately 455,000 Palestinian refugees living in the country. She left behind every semblance of her life apart from her children: fifteen-year-old Ahmed, ten-year-old Haytham, and two-year-old baby Mirna.

The stateless status of the nearly 7,000 Palestinian refugees that have escaped Syria, thus far requires them to pay approximately seventeen dollars for a fifteen-day visa, or thirty-three dollars for a non-renewable one-month visa after which they are expected to leave or face fines for overstaying. They are also subject to the same longstanding discriminatory laws posed against their Palestinian compatriots already resettled there. These include exclusion from access to Lebanese job opportunities at large (limiting them to mostly menial labor positions), schools, healthcare, and other basic civil rights and services. Such a context stands in sharp contrast to that of passport-holding Syrians, whom while experiencing their own set of grim conditions, are granted a six month residency visa which can be extended free of charge. Thus, they effectively enjoy the right to work without permits (in accordance to a long-established agreement), and self-stabilize in Lebanon without the constraints imposed on Palestinian refugees as a consequence of their stateless status.

Furthermore, aid resources are even more limited for those Palestinian refugees being displaced a second time—and are now crossing the border from Syria into Lebanon—than they are for Syrian refugees. This is primarily because Palestinian refugees residing in the West Bank, Gaza Strip, Jordan, Syria, and Lebanon fall under the specific jurisdiction of the United Nations Relief and Works Agency (UNRWA). Palestinian refugees in other countries—or refugees of other origins in all countries—fall under the jurisdiction of the United Nations High Commissioner for Refugees (UNHCR) provided they are able to register with said organization.

As Meesar quietly paces through the trash-filled streets clutching baby Mirna at her hip, she braces herself for re-adjustment to Shatila. Hopeless streets are not new to her. Born in Shatila herself, Messar escaped in 1982 during one of the most tragic episodes in Palestinian refugee history. The 1982 Sabra and Shatila massacre of more than eight-hundred Palestinian civilians left this area in disarray after Israeli forces cordoned off the exits of the camp, whilst a right-wing Lebanese Phalange militia executed a massacre. Few survived to tell the story.

Meesar escaped but has not forgotten. She was a mere toddler during the massacre. Meesar ruminates about the irony of her return with her own children: “I ran away from this slum with my family when I was Mirna's age because of the war, and now I am back with Mirna, escaping another war. Life is crazy.” Mirna, a feeble-bodied toddler with apprehensive brown eyes, breaks into a frenzied panic attack at the sound of a loud noise, her tiny ears rattled by far too familiar sounds of shelling outside her home in Yarmuk.

The Rising Cost of Safety

Meesar made the decision to flee the Yarmouk Camp in Syria when it became enrapt as a shelling target of both the Syrian regime and the Free Syrian Army. Her husband, a house painter, gave Meesar the family savings to flee for refuge in Lebanon, while he remained in Syria. Meesar and her three children now share a room with another family of four at a total monthly rate of $250, triple the amount she spent to house her family in Syria. “With a quarter of a dollar I could get bread for the whole family. Here, it costs me four dollars.” With no ability to earn income as a Palestinian refugee, Meesar is left with few choices.

Her current troubles of displacement are shared with approximately seven-thousand other Palestinian refugees that have fled Syria, according to UNRWA's list of registered persons. Hopeful for better living conditions than in war-torn Syria, Palestinians like Meesar struggle to adjust to life in a camp that has limited resources. But the ongoing crisis of Palestinians fleeing regional turmoil is not a new happening, as warfare in Iraq, Kuwait, and Lebanon has shown in the past. Yet, the tragedy is magnified, as a genuine long-term solution has never been implemented despite the cyclical nature of this humanitarian catastrophe.

Lebanese economics play a role in the obstacles Palestinian's face in Shatila. Lebanon enjoys a higher GDP than Syria, which translates to a higher cost of living. While Syria has a stronger provisioning of social safety nets, Lebanon has a free-market oriented economy and lacks many of the social welfare benefits for those living beneath the poverty line that were provided in Syria. Additionally, under the Syrian legal system, Palestinian refugees had access to job opportunities, public education, healthcare, and other government services.

The violent displacement, coupled with the sudden absence of many basic provisions has left most of these “new” Palestinian refugees in shock. Many families have even considered returning to the war zone of Syria to escape their new-found financial strife. At the Masna‘ crossing of the Lebanese-Syrian border, a different family of four returns to Syria, having no choice but to return to their war-ravaged homes. Refugee and father Ahmed Shehata explains, “I have no choice but to take my family back. I’m not allowed to work here [in Lebanon] as a Palestinian and we are here alone. How can I support my family?”

Some Palestinian refugees, like Ahmed Kollak, wonder about the lack of reciprocity of humanitarian gestures. “In 2006, during the Israeli-Lebanese conflict, we opened our homes to the Lebanese refugees, but now we are on our own here.” Some noted that they have not yet seen the promised aid from the UNRWA. “UNRWA comes and registers our names, but since we have arrived we have not once received any aid from them. An Islamic NGO has provided mattresses.”

Palestinian refugees in Lebanon are serviced exclusively by UNRWA, which struggles with a limited budget to offer support. UNRWA's spokesperson Hoda Samra highlighted the difficulty that double displaced Palestinians encounter to find work:

"We have had experience with Palestinians who were twice refugees, twice displaced. From a human point of view, it is very difficult to watch this humiliation occur again and again. Their plight is never-ending. These people have lost everything and have to start from scratch yet again.”

Yet, Samra explains that the agency lacks the funding to provide more support for refugees at this time:

"We cannot do much for them. We are providing primary health care and education for refugees in our schools. We are doing all that we can but we know it is not nearly enough. We cannot do our jobs because of the serious dwindling budget."

One problem Samra cites is the number of Palestinian refugees from Syria who are remaining in Lebanon past the expiration dates of their permits. These refugees, if apprehended, must pay a fine of thirty-three dollars to renew their status. This highlights an important contrast with Syrian refugees. Another UNRWA employee who chose not to be named explains that:

"There is a discrepancy between the treatment of Syrian refugees and the Palestinians refugees fleeing Syria. The Palestinians' visas need constant renewal, they end up paying till they can afford it and going underground in Lebanon. It is no secret that the Lebanese government's policies towards Palestinians are inherently discriminatory and marginalizing."

Displaced refugees have nowhere to relocate to, yet the agency has no funding coming in from international donors to continue support. The UNRWA's position is that it is strenuously and tirelessly trying to raise funds, but has struggled the past three years to deal with the organization's hundred million dollar deficit. “We start every year not knowing if we will be able to survive the last three months of the year. We are facing a chronic and acute funding crisis,” says UNRWA Director of Communications Chris Gunness.

As Meesar quiets her child, still pacing the alleyways of Shatila's shelters, she reveals that distress has increased, not dissipated. “I am worried for the children. School has already begun and [the] UNRWA has told us the schools are full. We were risking the ultimate price of fatality by staying in Syria, but here the cost of living makes survival just as much of a struggle if not more.”

Thousands of Palestinian refugees fleeing Syria to Lebanon face this horrifying daily paradox. For them, the fate of discrimination and inequality in Lebanon is just as dire as the fate of violence in Syria. Meesar grapples to understand this displacement:

"The lives we established in Syria became our home. The Lebanese government allows a Syrian refugee to work, to stay for six months, and to renew their visiting permit for free. Why is it different for the Palestinians?"

*[This article was originally published by Jadaliyya].