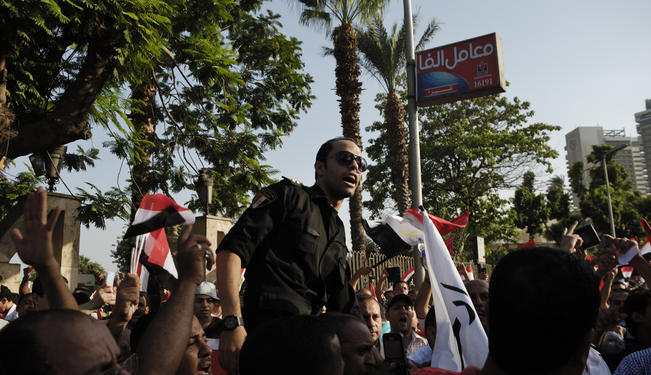 Analysis on Egypt is often marred by a revisionist vision of history.

In response to Reza Pankhurst's article in Fair Observer, let me be blunt: “Liberals” do not make up a large percentage of the population in Egypt, no matter what his definition of the term is. In the main cities — and especially outside major ones — Egyptians tend to be socially conservative and pious. This begs the question: Who are these people who took to the streets to protest in the millions? Why are they upset? Why have they left their homes en masse? The “liberal secular elite” that Pankhurst credits with deposing Morsi is a straw man. This straw man has been erected, it seems, because the prospect of conservative Muslims rising up against the rule by a different kind of conservative Muslim produces, for some, too much cognitive dissonance. How could it be — one imagines analysts are wondering — that conservative Muslims could rise against fellow conservative Muslims? Are they not of one mind?

Coup or Not a Coup?

Whether the events surrounding June 30 and the following days are a coup or a revolution has been hotly debated. I have noticed that as the dust now settles and such milestones as the naming of an interim government and a meeting between the US under-secretary of state, William Burns, the military and the interim leadership occurred, the emerging consensus among political scientists — who work primarily with models formed by historical precedent — lean on the side of a “coup” of sorts, and in some cases, a simple “textbook” coup. The only way one can draw such a conclusion is by dismissing the agency of the Egyptian masses, in particular, and grassroots mobilization in general.

I can understand why social scientists who work primarily with quantitative or historical models are tempted by this straightforward conclusion — what a nightmare to measure so amorphous a concept as “people power.” Whatever your analysis is though, it is clear not only that the grassroots mobilization on June 30 sparked the military coup (let us bear in mind that many people asked for it), but also that the scale of the protests themselves and its outcome were unpredictable. Of course, at the same time, in the most technical sense, this was a coup, as the army has taken power from a civilian government. As one of my favorite signs, held by a tea-sipping gentleman on a chair, from the June 30 revolt put it: “Mr. Obama, I am Egyptian. I am civilian. This is my peaceful coup. I know it is new to you.”

I repeat these facts because much analysis in the media, like Pankhurst’s, is marred by a revisionist vision of history. When one excludes the massive revolt from the analysis, the most important factor of the massive public outrage against the Morsi regime is lost. Another point that often follows is Pankhurst’s claim that the “coup” was a liberal conspiracy with the army. Many cite as evidence for this claim that the Tamarod movement, the group of revolutionary youth that started a petition that gathered, according to the group’s claims, 20 million signatures, explicitly called for the army to intervene, and met with representatives of the army. But no serious political player in Egypt planning a massive campaign of civil disobedience could have done otherwise. Thus, much of the analysis that reads such meetings as proof of a conspiracy rests on a fundamental misreading or lack of awareness of the history and position of the army in Egyptian society, and of the social logic produced by over 60 years of military rule in Egypt. Whatever the elite may think of it, the only form of social stability known to Egyptians for 60 years has been imposed by military rule. It makes perfect sense that in the face of instability, the Egyptian masses call for that stability. They should not be mocked for this.

This is not to glorify the Egyptian army, which is responsible for a massacre of 51 pro-Morsi supporters two weeks ago and several crimes under the SCAF rule, including a massacre of mostly Copts at Maspero, conducting “virginity tests” against female protesters, and subjecting up to 12,000 civilians to military trials. These crimes, coupled with the fact that Egyptians took to the streets en masse in 2011 precisely to bring down military rule should prompt us to ask what could have happened in Egyptian society that prompted the same people who rose against the army to, a short time later, rise against the Muslim Brotherhood and in many cases call for the army to retake power. I would argue that an extraordinary set of circumstances must have prompted this second phase of the revolution.

Therefore, rather than reading events as a liberal-army conspiracy, why not dial down one level of abstraction and look at the facts:

Did the army try to sabotage Morsi? Undoubtedly! Is the deepest struggle of the Egyptian revolution against the so-called deep state, including the military? Yes!

But the facts simply belie any simple explanations — including that of a “textbook coup” or an army-liberal conspiracy. Moreover, those who are obsessed with electoral legitimacy and the question of democracy are too myopic in their analysis, forgetting that this is a revolutionary context, which means that we are dealing with a population that is not organized yet into adequately representative parties that would allow for real political competition in Egypt.

One has to remember that two short years ago, every living Egyptian had never seen anything other than the most garishly rigged elections. This was not a game that anyone was used to play, and it should not be particularly surprising that there are stops and starts to the process.

One last word on “liberal hypocrisy.” Pankhurst, like many analysts, unjustifiably conflates “liberals” with “the masses of Egypt who do not like the Muslim Brotherhood.”  These are very different categories. The former makes up a very small fraction of the Egyptian population, the latter makes up its plurality, if not its majority. Another mistaken conflation is that of the Tamarod campaign and the massive revolt on June 30. Again, the first represents a tiny number, the second is a plurality, if not the majority of Egyptians.

Pankhurst cites Bassem Youssef and Mohammad El-Baradei as liberal hypocrites, but in fairness, considering the date of publication of Pankhurst’s piece, he may not yet have seen Youssef’s latest article, lambasting anti-Muslim Brotherhood Egyptians for their double standards. While there is certainly a terrible media climate in Egypt that is whipping some people into a frenzy of hatred against the Brotherhood (let me hasten to add here that I advocate their full inclusion in politics), I sometimes think “liberals” go too far in the other direction. For example, some are wringing their hands and saying, "well, maybe it would have been better if Morsi had held early elections… but that option was never seriously on the table," so resting on this analytical purgatory seems like an attempt to have it both ways. Furthermore, “liberals” are keeping their eyes and critiques on the army to the point that some have neglected to talk about the violence perpetrated by pro-Morsi protestors at all. However, this sort of guerilla violence is one of the most dangerous threats to Egypt. This is the violence that could truly lead Egypt into a civil war and an Algeria-type scenario.

I supported President Morsi for most of his presidency, even through the constitutional debacle, arguing that the Muslim Brotherhood had the right to participate in politics, won the elections, and should be treated absolutely equally to any other political actor. Nevertheless, we do need to face an uncomfortable fact: When was the last time the Muslim Brotherhood stood up for the rights of Christians, atheists, liberals, women, Shi’as, or any other heterodox group?

I am afraid one of many liberal paradoxes exists in Egypt as much as it exists elsewhere in the world: while it is part of the ideal “liberal” posture to ensure the equality and rights of everyone as a matter of principle, this is simply not the case for religiously-inspired political parties that make distinctions between Muslims and non-Muslims in the first instance and the “right” Muslims and “wrong” ones in the second. The liberal egalitarianism ethos is simply not part of religious parties‘ political platforms, including the Muslim Brotherhood’s. That is a problem, and liberals should state this clearly.