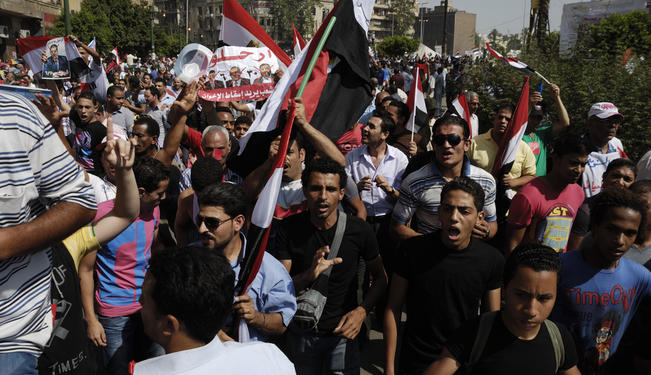 Egypt is far from ripe to embark on a truly representative democracy.

Due to a widening disparity between the elitist “haves” and the preponderant disenfranchised “have-nots” in Egypt, the split could transform into a stark class division for decades to come. This will heavily bear on Egypt’s social peace, in a country that is mired with insurmountable socioeconomic challenges and socio-political ills that cannot be overlooked for much longer before the country faces a total collapse.

Egypt’s endemic, deeply entrenched socioeconomic ills can only be effectively handled by enlisting the collective contributions and efforts of all Egyptians. The country needs to embark on ambitious socioeconomic revival programs with sweeping goals and well defined and well thought out milestones for their attainments to be reached.

Achievement of these goals can only be acquired through the very willing commitment of a motivated public, right across the board. A truly representative democracy, based on a comprehensive and encompassing consensual constitution that guarantees the separation of power and social justice, is the very first step on the long road for Egypt’s recovery.

For the post-Nasserite era, recovery in Egypt will mean the country regains its once glorious status as the leader of the Arab world and as the region's military, political, and industrial power that its geographical location, depth of cultural heritage, and demographics qualify the nation for.

The recent coup d’ètat by the military has reasserted their control over Egyptian political and economic life, as the elitist “haves” and the privileged armed forces have reinforced the existing class divisions, which has been termed as the “deep state.”

The deep state’s entrenchment was proven by the coup. The closely shared common agendas, deeply intertwined interests, and well-coordinated collaborative capabilities among its constituent and ubiquitously outreaching power groups, left nothing to chance.

The deep state has been forming for nearly four decades. It is the product of a 40-year-old corrupt political system commencing with the so-called open-door policy of President Anwar el-Sadat’s era.

The Egyptian military represents the backbone of the most powerful interest groups in Egypt’s so-called “deep state.” The New York Times syndicate columnist, Ben Hubbard, most succinctly summarized this strong role of the military in his July 3 article. Hubbard describes the army's outreaching influence controlling political life in Egypt as the most powerful behind the scenes player:

“Suddenly, Mr. Morsi, like his immediate predecessor, Hosni Mubarak, discovered the enduring fact that the military looks out for itself above all else. It is not ideological, but is intensely politicized… While justifying its intervention in politics as serving the will of the people, the military has never been a force for democracy. It has one primary objective, analysts said: preserving national stability and its untouchable realm of privilege within the Egyptian state… For decades, however, its tens of thousands of elite officers have jealously guarded their privileged station. They live as a class apart, with their own social clubs, hotels, hospitals, parks, and other benefits financed by the state. Many have also grown wealthy through government contracts and business deals facilitated by their positions… It is, in some respects, a hereditary Brahmin caste, in which sons follow their fathers’ careers and they all live inside a closed social circle.

'It is a tightly knit group,' said Robert Springborg, a professor at the Naval Postgraduate School in Monterey, Calif, and an expert on the Egyptian military. 'They tend to think alike and they are a force to be reckoned with because, besides the Brotherhood, they are the only really cohesive institution in the country.'"

Hubbard and David Kirkpatrick highlighted the collaborative, symbiotic role played by the other constituent components of the “deep state” – elitist ”haves,” the politicized judiciary,and the security apparatus – in paving the grounds for the military to stage its coup d’état in Egypt. In their the New York Times article on July 11, Hubbard and Kirkpatrick argue the following:

“Working behind the scenes, members of the old establishment, some of them close to Mubarak and the country’s top generals, also helped finance, advise, and organize those determined to topple the Islamist leadership, including Naguib Sawiris, a billionaire and an outspoken foe of the Brotherhood; Tahani El-Gebali, a former judge on the Supreme Constitutional Court who is close to the ruling generals; and Shawki al-Sayed, a legal adviser to Ahmed Shafik, Mubarak’s last prime minister who lost the presidential race to Morsi.”

Referring to the security apparatus, the writers continue:

“But it is the police returning to the streets that offers the most blatant sign that the institutions once loyal to Mubarak held back while Morsi was in power.Throughout his one-year tenure, Morsi struggled to appease the police, even alienating his own supporters rather than trying to overhaul the Interior Ministry. But as crime increased and traffic clogged roads — undermining not only the quality of life, but the economy — the police refused to deploy fully.”

The “haves,” rather disproportionately rich Egyptians who accumulated the larger part of their wealth during the Mubarak-era, are further explained in the article:

“Sawiris, one of Egypt’s richest men and a titan of the old establishment, said that he had supported an upstart group called “tamarrod,” Arabic for “rebellion,” that led a petition drive seeking Morsi’s ouster. He donated use of the nationwide offices and infrastructure of the political party he built, the Free Egyptians. He provided publicity through his popular television network and his major interest in Egypt’s largest private newspaper. He even commissioned the production of a popular music video that played heavily on his network.”

As to the politicized judiciary, mostly made up of judges during the Mubarak era, Hubbard and Kirkpatrick note:

“Gebali, the former judge, said in a telephone interview that she and other legal experts helped tamarrod create their strategy to appeal directly to the military to oust Morsi and pass the interim presidency to Hazem el-Beblawi, a former chief of the constitutional court.”

The same can be said of the Egyptian media that is largely funded and controlled by Egyptian billionaires, who amassed most of their disproportionate wealth, if not all of it, during Mubarak’s reign.

Naivety of the Government

In holding singularly onto the reins of state governance, President Morsi and his Freedom and Justice Party (FJP) proved naive and short-sighted. Under the illusion that they were the only organized political party in Egypt, the FJP overlooked the real intentions and greater manoeuvrability of the entrenched “deep state,” while in power. Morsi and the FJP thought that in the four years of the ousted president’s term in office, they could fill many critical government positions with loyal Islamists. Morsi must have thought that with the end of his tenure, the state would be controlled by Islamists and that they would in due course move, very much as in the case of Turkey’s Justice and Development Party (AKP), to curtail the power and influence of the army in Egyptian politics.

Had President Morsi followed the Tunisian example of forming a wider coalition government with other popular secular parties and political movements subscribing to a broad national agenda, he could have weathered or even mitigated some of the inherent obstacles posed by the deep state. This way, he would have possibly survived in office, pre-empting the army and its allies from carrying out a coup d’état.

While reserving judgment on President Morsi’s performance of governing Egypt in the short period since he assumed office, the truth is that the Egyptian “deep state,” the web of well-entrenched interest groups, would always coalesce to forestall any initiative towards genuine and meaningful socioeconomic and socio-political reforms. The “deep state” interest groups would always perceive any profound changes to the status quo as a potential threat to their stronghold on Egyptian political life and their well guarded interests.

With half the Egyptian population, possibly more than 40 million people, looming in abject poverty with a great percentage of them being illiterate, Egypt is deeply divided: the “haves” are ensuring the protection of the “deep state,” and the “have-nots” are ever marginalized and disenfranchised. Under these circumstances, Egypt could never aspire to successfully embark on a truly representative democracy. Egypt of these enduring two sides will maintain the façade of social peace and apparent security and political stability that would only postpone the inevitable day of reckoning for a little longer. Egypt will always be susceptible to a cataclysmic eruption that would only plunge the country in a continuous state of chaos and continuation of a deteriorating economic and security situation.

The current interest groups of the Egyptian "deep state" are incapable of acting in unison to affect the profound socioeconomic and political reforms Egypt needs. All introduced changes would be cosmetically appeasing for the sake of appearance, however, and they would never be profound enough to touch the very deep roots of Egypt’s lingering ills.

The members of the “deep state” are incapable of introducing representative democracy, as they prevent the proper representation of a significant part of Egyptian society, which would be necessary to empower and unleash the creative energies of the masses. This is, by virtue of the conflicting goals of the entrenched interests on both sides, preventing the general welfare of the Egyptian public on the basis of equity and equal opportunities.

Egypt, due to the inevitable abortion of its first experience with a nascent democracy, has proven without the slightest doubt the incompatibility, if not the impossibility, of co-existing forces of change who aspire to put Egypt back on the right track and the entrenched forces of the “deep state.” They appear as mutually exclusive.