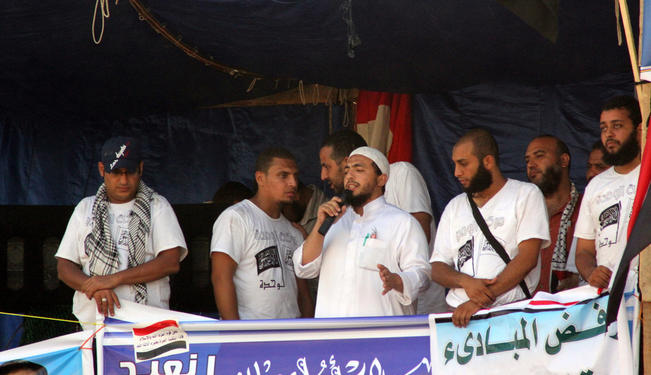 Al-Nour was providing an Islamist fig leaf for an adulatory, ultra-nationalist and oppressive military regime.

The announcement followed two months of anxious efforts by the Salafi al-Nour Party to secure the Islamic language introduced in the now-voided 2012 constitution. This has been quite the battle given their single-member representation of the tiny two-person Islamist contingent on the 50-person committee.

In late August, the al-Nour Party’s head, Younis Makhyoun, had proposed the party’s vision for Egypt’s road forward: an end to the violence and instability in the streets, and an inclusive political process led by the military and guided in religious matters by al-Azhar. His worries: a return to the police state of Hosni Mubarak and the removal of Islamic elements approved in the 2012 constitution.

Shari'a and the Egyptian Constitution

As it became clear to al-Nour in mid-October that the drafting committee, which interim President Adly Mansour appointed, was writing a new document nearly free of Islamic references, the party hurried to offer compromises. Article 219 could be excised, provided that the word “principles” was removed from the less controversial Article 2, which seemed to have survived and states that the “principles of the Islamic shari'a are the chief source of legislation” in Egypt. But their efforts were to no avail.

Article 219 had been the al-Nour Party’s great prize. For them, it added substance and heft to what they considered the flaccid phrasing of Article 2. The “principles of the shari'a” could be as bland and non-committal as “justice” and “the protection of life, dignity and property.” It was not specific enough to ensure Egypt’s commitment to Islam and the shari'a.

Shaykh Yasir Borhami, the chief ideologue behind the al-Nour Party, had penned lengthy diatribes against the liberal and permissive manner in which Egypt’s Supreme Constitutional Court had interpreted Article 2. It understood the article as prohibiting any new laws that contradicted “the principles of the shari'a,” which the court understood as the minimal, core rulings of Islamic law.

To the horror of conservative Muslim scholars like Borhami, this had allowed the court to approve of such policies as banning face veils in schools, since wearing it was not actually a requirement across the Sunni schools of law. In the opinion of al-Nour Party, Article 219 rectified this problem. It specified that the principles of the shari'a consisted of “its main categories of evidence, jurisprudential and substantive law principles, and its recognized sources according to Sunni Islam.”

Among Salafis, Article 219 became the rallying point for a post-Mubarak affirmation of Egypt’s Islamic identity. Perhaps as a reaction to this celebration, it also became the bête noire of the Salafis’ secular and ancien regime foes, who viewed it as a harbinger of an impending descent into Islamism.

Loading 219 with such significance is ironic, since the article’s wording is as malleable in Arabic as it is in English, and it adds little of substance to Article 2. I have never heard a passable explanation for how Article 219 would have reined in a liberal interpretation of Article 2. Rulings like the constitutional court’s approval of the face veil ban would be just as possible with 219’s verbose posturing as it had been without it. In one sense, however, Article 219 was of particular significance to Salafis. They trumpeted the fact that it specified, for the first time, that the understanding of the shari'a in Egypt would be a Sunni one. This was no more than a symbolic affirmation, however, since Shi'i law has played a marginal role in legislation in Egypt, and the country has a miniscule Shi'i population.

It has been a short and predictable trip for the al-Nour Party. Founded in the immediate wake of Mubarak’s fall in February 2011 by leading members of the Salafi Call (al-Da‘wa al-Salafiyya), the Alexandria-based Salafi organization, the party had three main aims: to ensure that post-Mubarak Egypt would not be a place where bearded men are arrested and tortured; improve the county’s deplorable standard of living; and make the Egyptian government Islamically legitimate. This last objective was particularly important. Well before the 2011 revolution, Shaykh Borhami, the Salafi Call’s most charismatic scholar, had written that Egypt’s government was not “Islamically legitimate.”

On this point the Salafi Call differed with most of the other Salafi organizations in Egypt. Although they all forbade any rebellion against a Muslim ruler, the Salafi Call stood out in that it did not grant Mubarak that station. Salafi Call leaders cited the well-known shari'a law principle that a ruler who fails to establish shari'a law is not Muslim. As such, his rule is illegitimate for his Muslim subjects. Article 2, which had been introduced by late President Anwar al-Sadat in the hopes of shoring up his Islamic legitimacy, offered a ray of hope, but it applied only to new laws.

If rebellion against Mubarak’s government had been Islamically permissible according to the Salafi Call, the organization never considered it a good idea. Calculating no chance of success in a confrontation with the state, the Salafi Call laid low and focused on teaching its followers. With Mubarak’s fall, however, the political square had been opened, and the Salafi Call leaders saw an opportunity to achieve real change.

The al-Nour Party was consciously designed by its main architect within the Salafi Call, Emad Abdel Ghaffour, to be administratively separate from the Call’s religious organization, which was to continue its religious activities apart from politics under the guidance of Borhami and other senior clerics. If the revolution went south or politics proved too polluting, the al-Nour Party could fold, and the Salafi Call could continue on as a religious organization with little impact. Alas, reality proved different.

Al-Nour’s early days were halcyon. In the country’s first free parliamentary elections in decades, al-Nour won 21% of the seats in the lower house and proved even more successful in the upper house elections. On the basis of impressions gleaned from Egyptians who voted for al-Nour, the party’s support came from its Salafi constituency and more conservative Muslim voters who saw the party as a fresh alternative to the checkered Muslim Brotherhood. Al-Nour suddenly seemed to be the new kingmaker in Egyptian politics.

Matters deteriorated, however. In September 2012, disputes between Abdel Ghaffour, the party’s chairman, and members of its leadership committee spilled into the open. Nader Bakkar, the party’ spokesman and one of its more telegenic personalities, explained that, since Abdel Ghaffour had been appointed as a close advisor to President Mohammed Morsi, he could no longer serve as al-Nour’s head as well. Behind the scenes, the real rub was the personality clash between Abdel Ghaffour and Borhami.

Shaykh Borhami had evidently not observed the division of labor between politics and religion, providing political direction to Bakkar and others. To make matters worse, Abdel Ghaffour’s approach to politics differed from that of Borhami and company. The shaykh was cautious and did not want al-Nour to commit itself too much to the initiatives of the Morsi government. Abdel Ghaffour believed this was the time for Islamists to leap fully into the political arena.

Relations with the Muslim Brotherhood

There was still more rancor. The leadership of the Salafi Call and the senior leadership of the Muslim Brotherhood had come out of the same Islamic student activist groups of 1970s. They knew each other well but had taken divergent paths, with Borhami and others choosing the path of Salafi religious scholarship and the political orbit of Saudi Arabia over Muslim Brotherhood activism in Egypt. There was no love lost between the groups now. Soon Abdel Ghaffour was ousted from al-Nour Party, and along with a hundred defectors from Nour, he went on to form the Watan Party in December 2012.

Despite their prickly relations, the al-Nour Party and the Brotherhood could work together on common causes. Al-Nour and popular Salafi Call preachers campaigned vigorously for Morsi in the run-off with the ancien regime stalwart Ahmad Shafiq. The two groups also worked together to draft the 2012 constitution and mobilize voters for its ratification by popular referendum, though the Salafis had irked the mainstream core of the Brotherhood with its insistence on Article 219 and its (failed) efforts to change “principles of the shari'a” to “the rulings of the shari'a” in Article 2.

In November and December 2012, however, relations worsened. Morsi’s constitutional decree, declaring himself immune from Egypt’s Mubarak-era judiciary, provided the president’s diverse but broad opposition with a golden opportunity. He was acting like the power-hungry Islamist they had always feared, and now even the most flagrant Mubarak-era folks could don the mantle of the revolution by calling for his departure.

*[Click here to read the final part. This article was originally published by Jadaliyya.]