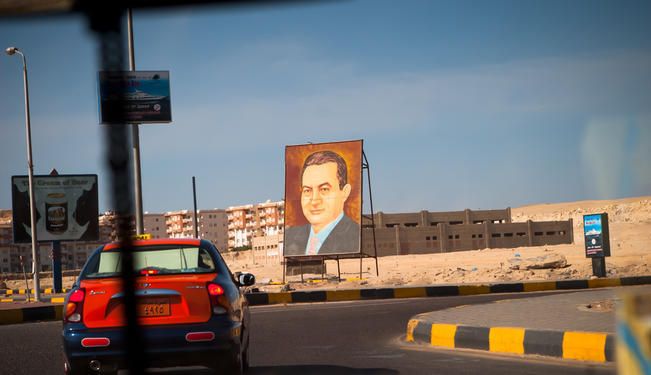 Egypt's army and the technocratic elites have also exposed the old face of authoritarianism.

Two years ago, at the first meeting of my MPhil in Modern Middle Eastern Studies at Oxford University, the Arab Spring – the transnational domino revolution – was all over the place and on everybody’s lips. The enthusiasm and hope of most students and professors was bolstered by the capacity of attending, at reasonable distance, the spectacle of protests and the feast of a revolt. One could hardly oppose or downplay the optimism of the student class without being pointed out as anti-conformist, out-of-touch, or otherwise politically incorrect.

When the discussion veered towards how to define the Arab Spring and the Egyptian case in particular, whether to call it "an uprising," "a revolt," "a process of democratization," or "a revolution," however, there was a need to locate and map out the events without the joy of the spectacle, but through a methodology of dissecting power, projects, and resistance. This piece does not pretend to be neither exhaustive nor comprehensive; it refers to the events only en passant. Instead, it responds to the exigency of theorizing the revolt, debunking the mainstream discourse of change through procedural transition, with a timely look at Egypt. The methodology, however, pretends to be applicable at the current and potential revolts across the Mediterranean Sea and beyond: Greece, Turkey, Italy, and Tunisia.

“Things Will Have to Change…”

It is true that the Arab Spring had become the new totem of evaluation and the inauguration of a new field of studies for the region. Those who have previously argued on Middle Eastern exceptionalism and the deep patience of the Arab Street, or on the all-powerful state against the always weak civil society, found themselves on the wrong side of history and had to recalibrate, overturn, and reject their position. Indeed, the reality of change is hardly deniable; there is no exceptionalism in the Arab world, neither society is weak, nor states are too strong. But it is also unclear what change signified — whether it was a new beginning towards another system of governance and power, or one that followed the famous saying: “If we want things to stay as they are, things will have to change” (Tommasi di Lampedusa, Il Gattopardo).

People in this region revolted with endurance and powerful actions as they faced repeated crackdowns and massive use of force against them. This, per se, is a demonstration that societal forces are probably more alive than in many European capitals. The issue is yet another. The enthusiasm, which brought many to call the (moderate) achievements of these uprisings, “revolutions,” was rooted in a concept of change in society based on compromise, a gradualist way out and, more importantly, one aimed at a stable transition of formal authority rather than effective transformation. In other words, the success was dependent on the maintenance of procedures of the yet-to-be-settled electoral democracy after the great feast of a revolt.

The result of this compromise — a concession to patience and (bourgeois) stability, out of the fear of radicalism and riots — was a sounding failure in the path of the revolution. People’s struggle in the last few years erupted in order to change the system, but conceded too much to the mechanisms of liberal democracy embodied in the electoral procedures, the "rule of law," and "legitimacy" – see Mohammed Morsi’s emphasis on shar‘iyyah (legitimacy) during the speech before the coup d’état. Thus, people revolted to bring about change from within, calling for new elections, therefore playing within the procedures. What remained untold was that these procedures concealed the true nature of power and sovereignty in Egypt. Procedures were the emperor’s clothes.

Time to Destroy this System

At this critical step, most of the people involved in the everyday politics of revolt and protest lacked the readiness to draw the necessary conclusion; that is to say, "time is right to destroy this system" and to formulate a new alternative. After the military-popular coup, the appointment of several Mubarak-era governors and the execution of the emergency law by the military government, the emperor has no clothes. Whether for too much political correctness or the hope for things to go back on (an impossible) track, many believed in the army, in technocracy, and the reactionary elements of this transitional moment.

Yet, 44% of Egyptians cannot indicate the exact name of their interim-president (Adly Mansour) and 70% do not know the name of their prime minister (Hazem al-Beblawi). However, they certainly can refer to Commander-in-Chief al-Sisi and this is not simply a matter of ignorance but, perhaps, a popular methodology of denouement of power, a deconstruction after all. In fact, technocracy and technocrats are not a neutral means of governance, despite pretending to be so. They are the means and representatives of domineering interests at national and global level, and their socio-political distance from subaltern, popular classes is not only geographical and sociological, but one which is rooted in inherent class interests. This consideration holds truth for the Egyptian as well as for the European cases.

As blood flows again in the streets of Cairo and the state of emergency is reinstated "for just a month" before procedures are back in place, world leaders yearn for a return to stability, and the (dis)solutions of all revolts and revolutions. The massacres of pro-Morsi demonstrators and the risk of sectarian catastrophe are instruments all too similar to that of the ancient regime of Hosni Mubarak.

It is not any longer a question of who is the majority, who represents whom, who is the opposition; the system has been uncovered, what is to be done lays with those who want to transform it before the counterrevolution succeeds and re-establishes a bloody and dangerous system of "business as usual." As the state hits the Muslim Brotherhood and wages a war against its supporters, the time seems ripe for revolutionary forces to wage a "war of maneuver" against the state, as now it has no clothes.

Transforming the Revolt into Revolution

Italian philosopher Giorgio Agamben writes: “This transformation of a provisional and exceptional measure [the state of exception] into a technique of government threatens radically to alter – in fact, has already palpably altered – the structure and meaning of the traditional distinction between constitutional forms.” It is the over-turning of procedures and the antinomy of technocratic rule. As the post-coup government in Egypt is representative of the technocratic, liberal – yet related to the old – political class, the move towards the declaration of the state of emergency exposes the nakedness of Egypt’s political situation.

The liberals and leftists who supported the Egyptian military in its coup against the Muslim Brotherhood have, in other words, paved the way for the success of the counterrevolution. In this way, they have guaranteed consensus to the state security and military apparatuses, making the exception of their direct role in politics, the rule of Egyptian politics. By means of the state of emergency, the army’s rule is now "being-outside, and yet belonging" — that is to say, it is outside of the legitimate political system and yet this system relies on its power. This produced a situation where "the sovereign, who decides on the exception, is, in truth, logically defined in his being by the exception." All responsibility is now de jure and de facto with the security apparatuses of army and police.

The state of exception is the point of strength of the armed forces but as political responsibility lies with them, they are also formally accountable on the battlefield and liable of criticism. The momentum is key for the outcome of Egypt’s uprising. It is at this very moment that protesters and revolutionaries can determine whether they want their history to be that of a revolt that is going to fail eventually — because it does not translate actions into strategy – or they desire for this revolt to become a revolution that liberates reality from the existing domineering power and authority.

The Importance of Failing

The Egyptian struggle is similar to those of many others across the region and beyond. They must make good use of impatience and after exposing the nakedness of the king – the army and surroundings – they bring him to the public place for a revolutionary feast, a material rite of passage towards a new mode of politics. In doing so, Egyptians shall not fear failure, as failure is the potency of every political action. Beckett’s refrain come to their rescue: "Ever tried. Ever failed. No matter. Try Again. Fail again. Fail better!"