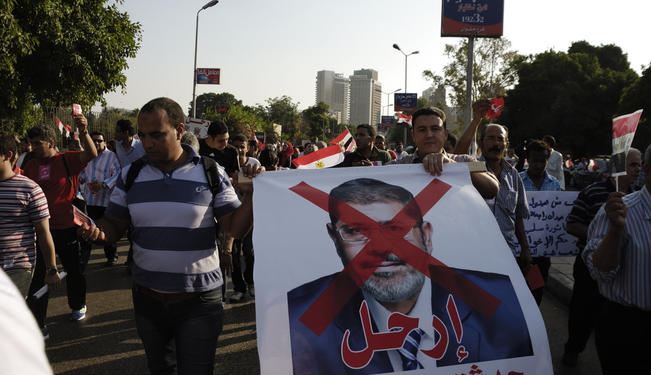 Morsi’s political demise has far-reaching consequences for Egypt and the region.

Egypt is back to square one, with the military grabbing centre stage again through a coup in all but name. This came just two-and-a-half years after mass protests toppled President Hosni Mubarak in a popular uprising that rejected a security-dominated autocracy and the military’s behind-the-scenes central role in politics. The military owes its return and the prospect of regaining its key role in Egyptian politics to the missteps of ousted President Mohammed Morsi and his Muslim Brotherhood government – the very force with whom it was at odds for the past six decades.

Morsi came to office after more than a year of transitory military rule that the armed forces bungled with its inept, post-revolt attempts to preserve as much as possible the old autocratic system and its perks and privileges: control of national security; an independent relationship with the United States that funds it to the tune of US$1.3 billion a year; rejection of civilian oversight; and autonomy for its commercial empire that accounts for at least ten percent of Egypt’s gross national product.

History will remember Morsi less as Egypt’s first post-revolt, democratically-elected president than as a failed leader who thwarted the achievements of the popular uprising’s goals and strengthened by default the military’s grip on politics, while presiding over an economy that was already in stark decline following the revolt that overthrew Mubarak. Morsi also severely tarnished Saudi Arabia and Qatar’s support for Islamists across the Middle East and North Africa, and demonstrated that the Brotherhood, despite being one of the world’s largest and best organised Islamist movements, has a long way to go before it is ready for government.

Morsi’s failure is much the result of opposition and resistance by key state institutions – the military, the security forces, and the judiciary – to the rise of the Brotherhood. Morsi’s decision to run for office, contrasting starkly with the Brotherhood’s initial reluctance to join the anti-Mubarak uprising, broke its early promises not to seek a post-revolt majority in parliament or field a candidate for president.

Morsi’s insistence to the bitter end that he was a legitimately-elected leader reflected the same majoritarian interpretation of democracy displayed by Turkish Prime Minister Recep Tayyip Erdogan in his response last month to mass protests. Both Morsi and Erdogan’s failure to adopt inclusive policies alienated a significant portion of the population. But unlike Erdogan, Morsi failed to realise that he had lost the second ingredient of legitimacy alongside electoral victory: a recognition by those that had not voted for him that he was the country’s elected leader.

Morsi’s political demise has far-reaching consequences for Egypt as well as the Middle East and North Africa.

The military will remain a key force free of civilian control and with a significant political and economic power base even if newly-appointed President Adly Mansour moves immediately towards free and fair elections. The reinstatement of Mubarak’s attorney general, the rounding up of hundreds of Muslim Brothers in the wake of the coup, and the prosecutor’s investigation of Morsi on charges of "insulting the presidency" suggest that the military sees its intervention as an opportunity to shape Egypt in its mould. It raises the question of the role of the military in future anti-autocratic struggles in the Middle East and North Africa.

As Egypt ventures into uncharted waters, the military would do well to look towards Southeast Asia where retired military officers in countries like the Philippines, Indonesia, Thailand, and Myanmar, successfully managed their countries’ transition to democracy. Those officers understood that their interests were best protected by getting in front of the cart rather than seeking to salvage what they could of a failed system that lacked popular support. That is a recognition that has yet to be accepted by Egypt’s armed forces as well as other Arab militaries.

The coup reinforces a widespread sentiment among Islamists that, in the words of Morsi’s national security advisor Essam al-Haddad, "democracy is not for Muslims". It risks the radicalisation of Islamists across the region, who may see the ousting of Morsi as evidence that the Brotherhood’s strategy of working within the system is doomed to failure. There is little short of releasing detained Brothers, lifting the ban on Islamist media, and immediate free and fair elections in which the Brotherhood will be allowed to compete unhindered that will counter the Islamists’ sense of disenfranchisement.

That sense of disenfranchisement is reinforced by the repression of the Brothers by Egypt’s three previous presidents – Gamal Abdel Nasser, Anwar Sadat and Mubarak; the 1991 abortion of Algerian elections to prevent the victorious Islamists from taking office, thus sparking a brutal civil war; the soft coup against Turkish Islamist Prime Minister Necmettin Erbakan in the late 1990s; and the Western boycott of Gaza following the electoral triumph of Hamas.

The intervention of the military strengthens Saudi Arabia in its rivalry with Qatar for influence in the region. Saudi Arabia, backed by the United Arab Emirates, cemented its regional predominance by assuring the Egyptian military that it would step in if the United States cut off its US$1.3 billion annual aid to the armed forces or if Qatar, the Brotherhood’s main backer, reduced its $5 billion support to the government during Morsi’s tenure. The intervention was Qatar’s second regional setback as the country seeks to stamp its own influence in the Middle East. Similarly, the supply by Saudi Arabia of non-US surface-to-air missiles to Syrian rebels — endorsed by the US — was, from the kingdom’s perspective, designed to strength the resistance to President Bashar al-Assad as well as to weaken the Brotherhood’s Syrian wing supported by Qatar.

The Egyptian military intervention constitutes a watershed that is fraught with danger and likely to reverberate throughout the Middle East and North Africa. The absence of a reformist wing in Arab militaries comparable to those in Southeast Asia will complicate the region’s transition from autocracy to a more open, transparent, and accountable polity.