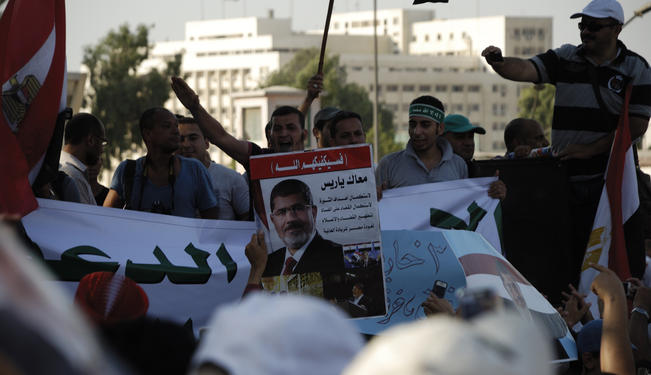 Morsi's ouster shows that the march towards democracy is far from linear.

Egypt's political history was turbulent in the 20th century. After the failure of the “liberal experiment” in the 1940s, the Free Officers Movement, led by Colonel Gamal Abdel Nasser, seized power in 1952. This was made possible because the army was then seen as the “bearer of modernity and progress.” It marked the start of the military's interference in Egypt's modern political history.

Under Nasser, Egypt regained its past glory. Using Arab nationalism as a tool to advance Egypt's interests, the country became the regional hegemon. Consequently, the military tremendously increased its prestige and its hold onto power.

However, the relationship between the army and the Muslim Brotherhood was chaotic from the start. As political Islam represented an ideological threat to Arab nationalism, Nasser conducted a harsh repression against the organization. This contributed to the radicalization of some Muslim Brothers, such as Sayyid Qutb, who turned to violence in the 1960s.

Nasser's successors, Anwar El Sadat (1970-81) and Hosni Mubarak (1981-2011), also had a military background. Both sustained an ambivalent relationship with the Muslim Brotherhood: the organization was tolerated but officially illegal. During Mubarak’s 30-year rule, the whole country collapsed: economic decline and increasing social inequalities were coupled with strong authoritarianism and a high level of corruption.

Thus, the 2011 uprising which toppled Mubarak was the result of a long series of historical grievances. After the subsequent rule of the Supreme Council of the Armed Forces (SCAF), the legislative victory of the Muslim Brotherhood's Freedom and Justice Party (FJP) in January 2012 (47%) and the election of Mohammed Morsi as president in June (51.73%) was not a surprise. The organization was the most popular social movement in Egypt. After its foundation in 1928, the movement built an extensive network of social services which helped it gain credibility in many communities. Thus, whereas in 2011, most political parties were young and lacked historical legitimacy, the Muslim Brotherhood had developed very strong organizational skills and was seen, by many, as a credible political actor.

Morsi’s victory last year raised many expectations. Yet many Egyptians became disillusioned with the FJP-led government, claiming it did not meet their most basic needs. Since Morsi came into power as Egypt’s first civilian president, Egypt's economic situation has plummeted and very little changes have taken place at the political level.

In short, the large demonstrations across Egypt on June 30, 2013, as well as on the following days, were the result of decades of economic and social deterioration, coupled with political disillusion and frustrated expectations. The army, using its legitimacy as protector of the people, decided to step in and take command of the country. It ousted Morsi and appointed a new interim government with Adly Mansour, the head of the constitutional supreme court, as interim president, and Hazem Al-Beblawy as prime minister.

Why is Morsi's Ouster Relevant?

Two years after Mubarak was toppled and only one year after a new government was democratically elected, the military is back on the political scene. Some speak of a military coup, whereas others claim the army is the only institution able to take care of the people. In any case, this signals a significant political instability and augurs constant and harsh struggles for power between the different political forces of the country, as evident in the violence in the last weeks, resulting in more than 150 deaths.

Besides, with Egypt remaining a key actor in the region, internal events may have an impact outside the country, causing increased instability in the Middle East and North Africa. The deposition of a democratically elected government in the region also has a crucial symbolic meaning. It shows that the post-Arab Uprisings world remains far from a linear progression towards democracy, and that a revolution may not benefit those who launched it.

Morsi's supporters feel the deposition of Morsi is illegitimate and they have vowed to protest until he is reinstated. Consequently, it is very hard to predict which path Egypt will follow. However, Egypt's armed forces chief, General Abdel-Fattah Al-Sisi, who called for Egyptians to confront “violence and terrorism” on July 26, is likely to play a key role in Egypt's future. In any case, “the results will probably not be a brave new world, but a messy compromise.”