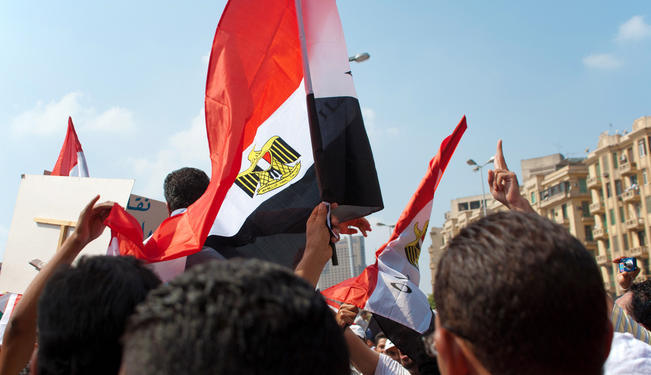 Call it a coup or not, but Egypt now has Mubarakism without Mubarak. This is the second of a three part series. Read part one here.

In the case of Mohammed Morsi, the media campaign against him and the Muslim Brotherhood, most prominently on CBC and ONTV satellite channels (both owned by members of the Mubarakist bourgeoisie), far outstripped anything that the CIA-financed El Mercurio could do in its anti-Salvador Allende campaign before the CIA-sponsored coup toppled him in 1973 Chile – which is not to say that Morsi is an Allende but rather that many of his powerful enemies are not unlike Allende’s (after all, middle class women carrying pots and pans, members of the truckers’ union, among other sectors, would march and strike against Allende’s rule).

Rumors had it also that the anti-Palestinian and increasingly anti-Hamas Morsi government was giving the poor and besieged Gaza Palestinians electricity (which it was not), that it was allegedly stealing from the Egyptian people and causing massive shortages in Cairo and around the country. Other rumors had it that Morsi was ceding the Sinai to Hamas and the Palestinians. More rumors would have it that Hamas elements were being brought in to harass Egyptian liberals and leftists who opposed Morsi’s policies. Just a week before his ouster, we were told without a shred of evidence that Morsi had imported 1,500 Hamas elements to attack the anti-Morsi demonstrators set to stage their massive rallies on June 30, demanding that Morsi step down. The media-whipped hysteria gripping the country was of such magnitude that even usually levelheaded liberal and leftist academics abandoned their critical faculties altogether, and immersed themselves exclusively in the world of Facebook rumors and yellow journalism, which became their primary source of information and education.

The Morsi government was clearly adamant in its plans to push ahead, with blunders and all (and its stupid blunders let alone its neoliberal policies and its utter incompetence in running the country are sufficient on their own to discredit it), including its courting members of the Muslim Brotherhood and other Islamists for key positions in the government, in constitutional committees, and in the bureaucracy. It is true that Morsi invited many in the opposition throughout his year in power to join committees, the cabinet, the bureaucracy, and even his team of advisors (and some accepted for a while), but most of them rejected these offers, fearing, legitimately in many cases, that they would be used as fronts for what they expected would be a program of “Ikhwanization” (the Brotherhood in Arabic are truncated to “Ikhwan”) of the state, which has been astronomically exaggerated by the Mubarakist media. Others resigned advisory positions they had accepted because Morsi refused to heed their advice, something, according to reported Muslim Brotherhood sources, he also did with Brotherhood advisors.

But the incompetence of the Muslim Brotherhood presidency was not the only reason the country deteriorated in the last year. Everywhere Morsi turned, the Mubarakists put obstacles in his way. The government bureaucracy refused to cooperate with him, the judges fought him every step of the way, and the police refused to redeploy in the streets. The Mubarakist bourgeoisie, as is increasingly being revealed in the international press, fabricated an energy crisis causing massive shortages in fuel and electricity, which miraculously disappeared upon Morsi’s removal from power.

This set the scene for the massive mobilization that a new “movement” calling itself “Tamarrud” (which actually means “Mutiny” and in some contexts “Rebellion,” but not “Rebel” as its founders, supporters, and the western media erroneously translate it), which called for the demonstrations on June 30, the first year anniversary of Morsi assuming the presidency. The entire spectrum of the coalition, which had formed and consolidated itself since Morsi’s election, including the National Salvation Front, which was hastily put together following the issuance of Morsi’s constitutional decree, joined in demanding that Morsi leave office. They would be successful in mobilizing millions in the streets culminating in the June 30 demonstrations.

A deal was brokered with the army (and the Americans), by which the army declared a coup, ousted Morsi, and began a witch hunt, in which it is joined by enthusiastic members of the public eager for the chase, against the Brotherhood. Muslim Brotherhood office buildings were burned down around the country by the “peaceful” demonstrators, including its headquarters in Cairo. The coup was not called a coup, and members of the popular coalition that support it consider anyone who calls it a coup “an enemy of the Egyptian people,” as many have been posting on Twitter and Facebook.

While Islamist and Muslim Brotherhood television stations were closed down minutes after the coup was announced, Morsi was abducted by the military and placed under arrest in an undeclared military location, and top members of the Brotherhood were arrested or have become fugitives. Top member of the National Salvation Front and charisma-less Mohammed El-Baradei has defended the military repression unhesitatingly to Western leaders and politicians, and was awaiting his appointment in the post-coup government in recognition of his efforts to sell the coup as a democratic revolution or even as a “recall election.”

One of the first acts of the coup leaders was to shut down indefinitely the Gaza border crossing, effectively strangling the strip and its Palestinian population. They have also immediately resumed demolishing whatever underground tunnels have escaped destruction since the last campaign. Xenophobia in the country against Palestinians, and increasingly Syrians and Iraqis, is taking on fascist proportions. The coup leaders issued an announcement threatening members of these nationalities resident in the country with legal prosecution if they joined any of the demonstrations.

The current popular festive scene in Cairo is ironically reminiscent of triumphalist fascist festivities in the Europe of the 1930s rather than of democratic ones. But it is not the Muslim Brotherhood who declared the coup, as we have been prepared to expect for a whole year, nor was it they who put the opposition in jail and closed down their TV stations, burned down their headquarters, and are chasing them in the streets and calling on people to hand them over to the police and report on them.

Indeed, during the one-year rule of Morsi, not one television station or newspaper was closed — even and especially as many of them would call for open rebellion and for the violent overthrow of the democratically elected government. True, some journalists were prosecuted for insulting the president (and no sitting president in Egypt or arguably in any other country has ever had to endure a small fraction of the daily, if not hourly, insults and ridicule Morsi endured during his tenure, let alone the type of media language used to humiliate him) by paying fines. Though he could not successfully interfere with the privately-owned media, Morsi did take over all state-owned newspapers and replaced their editors, many of whom were Mubarakists, but a number of whom were elected editors, with his own appointments.

One feels the terror of the witch-hunt on the streets of Cairo, and the targets are not just card-carrying members of the Muslim Brotherhood. Pro-coup doormen of posh buildings in the upscale neighborhood of Zamalek, to take a small example, taunt and threaten other doormen who are accused of supporting the Brotherhood. The latter are staying indoors for fearing for their lives after the coup was announced. What is happening in more divided middle class and poor neighborhoods and in smaller cities and the countryside, is far worse with fire exchanges, shootings, and outright killings in which all sides are involved. The army itself shot and killed tens of pro-Morsi demonstrators who opposed the coup. As the fascist adulation for the army and police have been adopted popularly in full force, this could very well spell the beginning of a much-feared civil war and massive pogroms against those identified as “enemies” of Egypt and the Egyptian people.

The Liberals and the Leftists

How can one explain that liberals and leftists would support a coup against a democratic order for which they fought, would stage a revolution “against “democracy,” in alliance with the Mubarakist bourgeoisie and with the very military they condemned so hard just a year earlier until it ceded power to an elected government? The military and the bourgeoisie and Mubarak’s judges have evidently not changed, but the liberals and the leftists have. Their rationale is one reminiscent of the futurist and dystopic Hollywood movie Minority Report, wherein the authorities prosecute people for “pre-crimes” – i.e. crimes they would commit in the future if they were not caught before they committed them. They allege that the Muslim Brotherhood was going to stage an anti-democratic coup of sorts and begin to repress them, and for this future crime, which the Brotherhood and Morsi were expected to commit, the anti-Morsi coalition had to intervene and punish them now to prevent them from canceling democracy in the future.

But it is the liberals and the leftists who helped stage the coup, and who ended extant electoral democracy, and who are persecuting and prosecuting the Muslim Brotherhood for real and imagined crimes, not the other way around. That their coup was popular, they insist, means it is what the people want. But the people also wanted fascism and they also wanted Nazism? How is this an argument for democracy, which they claim it is? They assert in response that workers and the poor joined in their marches. But workers and the poor also joined the fascist and Nazi rallies. They are also part of Muslim Brotherhood rallies.

*[Note: Read the final part on July 20. This article was originally published by CounterPunch.]