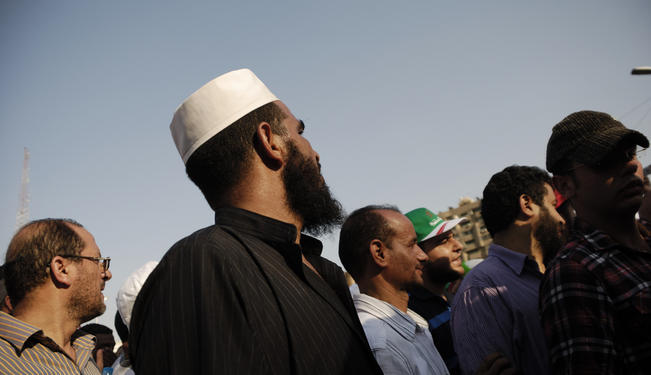 Al-Nour was providing an Islamist fig leaf for an adulatory, ultra-nationalist and oppressive military regime. Read part one here.

In January, al-Nour Party elected a new head, Younis Makhyoun. Tensions between al-Nour and the Brotherhood broke to the surface when Khaled Alam Eddin, a senior al-Nour member who had been chosen by Mohammed Morsi as an advisor, openly accused the Brotherhood of exclusionary behavior and making consensus-based governance impossible.

He also admitted meeting with the recently formed National Salvation Front (NSF), an alliance of mostly secular, anti-Morsi parties. On January 30, al-Nour and the NSF announced that they shared a common vision for moving forward to extricate Egypt from the political impasse that had formed between Morsi and his opponents. From that point on, al-Nour openly refused to participate in protests organized by Islamists to show public support for Morsi. In mid-February, President Morsi dismissed Alam Eddin with accusations of improper conduct.

In the media frenzy that followed, the al-Nour Party and the Muslim Brotherhood traded barbs that culminated in Makhyoun’s announcement that he would soon publish a report documenting the Brotherhood’s plans to “Ikhwanize” the state. The al-Nour Party joined the chorus of opposition accusing Morsi of incompetence, being deaf to the people’s concerns and attempting to force the Brotherhood into all levels of government.

As the situation approached its finale, on June 9, Nader Bakkar announced that al-Nour would not participate in pro-Morsi rallies on June 30. (But to be fair, the maverick Salafi, Hazem Abu Ismail, a popular supporter of Morsi, also refused to participate. Both he and al-Nour cited the danger in two big bodies of supporters meeting in the streets.)

But al-Nour ended up doing much more that merely refusing to stand with the Brotherhood. When Gen. Abdel Fattah al-Sisi took to the air to announce the military’s overthrow of President Morsi, al-Nour’s leader, Younis Makhyoun, was seated prominently next to him along with other coup supporters. While Abdel Ghaffour and other many other prominent Salafis (not associated with the Salafi Call) frequented the rostrum at the Raba’a sit-in, the al-Nour leadership openly rebuked any of its rank and file members who participated.

Borhami, Makhyoun and Bakkar continued to lambaste the Brotherhood for its failings. Bakkar even offered to resign as the al-Nour Party’s spokesman after he – counter to his party’s line – praised the peaceful nature of the sit-ins. When the military assaulted protesters to break up the sit-ins, the line between the Salafi Call/al-Nour and the rest of Egypt’s Salafis (and Islamists more broadly) became clear.

Some independent Salafi preachers like Mohammad Abd al-Maqsud took to the internet and launched scathing attacks on the army and security services for shedding civilian blood. Others chose to go silent in the face of the intense violence. These included the famous Salafi preacher Muhammad Hassan from the Ansar al-Sunna organization, who had earlier criticized the Sisi regime for killing protesters.

The al-Nour Party, however, reaffirmed its support of Sisi and the army. Bakkar has continued to praise the military effusively and has stated several times that al-Nour has no objection to a Sisi presidency. On August 16, as the worst of the crackdown was playing out, al-Nour and the Salafi Call issued a joint declaration affirming their support for the Egyptian army. The party has expressed only the mildest concern for the killing of civilians.

How was it that the al-Nour Party, so long a specter of some conservative Islamist take over, has actively supporting the Sisi regime despite its slaughter of fellow pious Muslims? This cannot be explained merely by pointing to al-Nour’s troubled relationship to the Muslim Brotherhood.

The army’s massacre of civilians has earned broad condemnation from across the political spectrum, including from Brotherhood opponents. Wouldn’t a party of pious Muslims, faced with the killing of unarmed Muslim men and veiled Muslim women, abandon the Sisi government faster than, say, Mohammad el-Baradei or other disenchanted liberals?

Hence, al-Nour’s ungainly leap on the anti-Brotherhood bandwagon in early 2013, its embrace of the NSF, and its wholehearted support of the Sisi government. Hence, its bizarre obsession with anti-Shiite vitriol that exceeded mere theological polemics (standard for Salafis) and flooded madly into the political realm.

In April, after Egypt and Iran agreed on an innocuous tourism exchange, a small delegation came from Tehran. Al-Nour reacted as if Shiite legions were breaching the Suez Canal. It launched aggressive protests at the Iranian ambassador’s house in Cairo and, on May 13, al-Nour MPs in the toothless Majlis al-Shura declared that Iranian tourism was major threat to religion in Egypt – all in a country with an insignificant Shiite population. Hence, the party’s loyal embrace of the Sisi regime despite its jailing of thousands of Muslims, closure of Salafi satellite channels and, most glaringly, the secularization of the constitution.

The most plausible element of this theory is that al-Nour/Salafi Call has so steadfastly supported the Sisi regime in the hopes of increasing its share on Egypt’s mosque and Islamic educational scene. But this is unconvincing both in theory and in fact.

First, other Salafi organizations, including the Ansar al-Sunna and influential Salafi preachers like Muhammad Hassan and Abu Ishaq al-Huwayni, have avoided the regime’s wrath by eschewing politics. They seem more likely to attract Salafi followers than a party/religious organization that has actively supported a regime which has gunned down and imprisoned so many like-minded Muslims.

Second, under the Sisi regime, the Egyptian government has stepped up its efforts to centralize mosque preaching and Friday prayer sermons under the leadership of the pro-Sisi, vehemently anti-Salafi Shaykh of al-Azhar, Ahmed el-Tayyeb. The "Egyptian Islam," being instituted by this initiative, is far from welcoming to the Salafi brand.

The second theory is the al-Nour Party leadership believed that by supporting the coup, it could secure the relatively limited objectives it had been founded to pursue: protect Salafis from police brutality and lock Egypt’s legal regime into a shari'a framework.

Unlike many Muslim Brothers, Salafis never bought into democracy as an ideal. At worst, it was prohibited by Islam (haram); at best, it was a useful procedure. Rooted deeply in the political quietism of the classical Sunni Islam of the medieval period, Salafism is much closer to the state-obsequious institution of al-Azhar than to the Western political engagement of the Brotherhood. As one 14th century scholar wrote: "We are with whomever wins."

This theory would explain why, throughout its months of anti-Brotherhood cheerleading and cooperation with the NSF, al-Nour leaders were nonetheless hounding the then- and current-interior minister, Muhammad Ibrahim, for the police’s treatment of detained Salafis as well as liberal protesters. Even on May 11, the Salafi Call spokesman called on Ibrahim to resign after he refused to let newly bearded policemen return to work.

This would explain why, just a day before Article 219 was dropped from the constitution, Bakkar announced that, though he welcomed a Sisi presidency, he was very concerned over the overwhelmingly secular make-up of the drafting committee and of the impending ban on religious parties.

If this is why the al-Nour Party supported Morsi’s deposal, then the party’s decision was catastrophically naïve. This failing probably supports the theory more than it undermines it, since naiveté regarding the nature of military coups has been the order of the day across Egypt’s political spectrum. Al-Nour Party officials, who might bemoan their support for Sisi, can find solace in the company of liberals like el-Baradei.

That the al-Nour Party was providing an Islamist fig leaf for an adulatory, ultra-nationalist and oppressive military regime may have been obvious to Borhami, Makhyoun and others. That Morsi supporters, many of them pious, bearded and veiled, would be crushed beneath its boot may also have been clear. This is what happens, a good Salafi might note, when one chants the very Western slogan of democratic legitimacy (shar‘iyya) instead of following the classical shari'a duty of obedience to the ruler.

But the al-Nour leadership should have known that their precious amendments to Egypt’s legal identity, those few words that could make it a legitimate Islamic state in their eyes, were doomed the moment the army warned it might intervene. Even the first representative that al-Nour managed to wedge into the drafting committee, Bassem al-Zarka, resigned just a few days after the committee began its work – for "health reasons," insisted Makhyoun.

Perhaps the al-Nour leadership knew they were being used in a process that would very quickly lead to the party’s own dissolution. This might not be too high a cost in the estimation of Borhami, Bakkar and their comrades. The party and the foray into politics had always been an experiment, dispensable and detachable from the Salafi Call’s real mission.

The question is, having supported a government that has left thousands of bearded men and veiled women, young and old, dead, disappeared and detained, and with all the emotionally maimed families they leave behind, how many Muslims in Egypt will now consider heeding the Salafi Call?