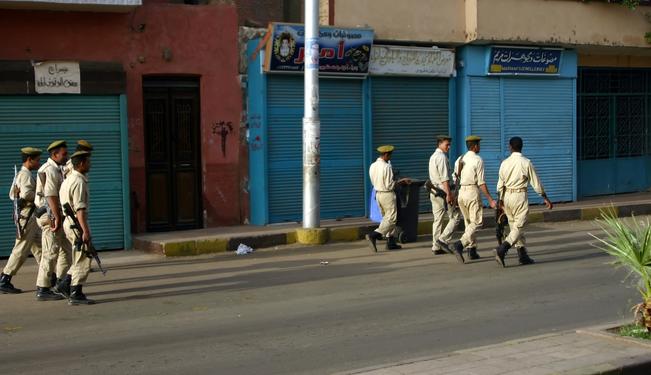 The coup in Egypt is a consequence of the military’s direct interests.

By Stephan Roll and Max Gallien

For many observers, the return of the military to the political scene in Egypt did not come as a surprise, as it regards itself as a guardian of public order, which was under threat from the protests and their effects. However, the way in which the generals overhauled the entire political system, through the removal of Mohammed Morsi and the suspension of the constitution, did cause some astonishment. It is now becoming increasingly clear that the coup was not at all a spontaneous reaction to the protests, or even an attempt at strengthening democracy, but instead a carefully planned return to power based on the military’s direct political interests.

One key goal of the military is to secure the integrity of the Egyptian state. The generals had observed the worsening security situation, the proliferation of small firearms beyond rural areas, and the ongoing jihadist activities in the Sinai with growing concern.

However, the greater worry was the country’s economic situation. The paralyzation of the political system under the Morsi administration has led Egypt to the brink of economic collapse. The economic decline hangs like a sword of Damocles over the Egyptian military. Egypt prides itself as the 11th largest army in the world. On top of that, the military also controls a bloated economic empire that offers significant opportunities for an additional income for officers. However, all this is reliant on the economic support of the state, and could not be funded in the case of a national insolvency.

Finally, the generals were also concerned with the integrity of the military itself. Like in all other state institutions, there was also a fear of an Islamic infiltration. The threat of a disempowerment of the military, as it played out in Recep Tayyip Erdogan’s Turkey, had to be averted as well.

Based on these motivations, the Egyptian military has most likely been preparing its return to power for some time. Three assumptions may have encouraged them to put their plan into action.

First, the military could safely assume that large parts of the population would support its intervention, especially if the military leadership avoided the direct political role it played after the fall of Hosni Mubarak.

The mass protests on the anniversary of Morsi’s presidency confirmed this calculation; millions of protesters demanded the army’s intervention. In addition to the liberal opposition and young activists, even the largest Salafist party, the Coptic church, and Al-Azhar, Egypt’s most important Islamic institution, could be won over for the army’s move. The head of the constitutional court, not a general, was appointed president. However, the difficulties in forming a transitional government demonstrated the instability of this very heterogeneous coalition. Hence, the military could be forced to interfere more directly in the nation’s politics than it had originally planned.

Secondly, the military assumed that it would be possible to isolate the Muslim Brotherhood within the Islamist spectrum and weaken them politically.

At least for the moment, this calculation appears to have been correct as well. The Salafist al-Nour party already proved that they are willing to cooperate with the military. In the medium term, other Islamist groups are likely to follow this example and build on a return to the political system. Of course, there is also much sympathy for the Muslim Brotherhood within the Islamist spectrum. However, they are also seen as competitors. It has become more difficult for the Brotherhood to portray the argument with the military as a religious conflict.

Within the Muslim Brotherhood, criticism against the leadership’s uncompromising stance could arise. The Brotherhood is mainly recruiting members from Egypt’s middle class. Consequently, it is much better equipped for political participation than for grueling confrontations on the street. In the face of violent clashes, many Brotherhood supporters might find attractive alternatives in more moderate Islamist parties or turn their back on the political system. At the same time, young members of the Brotherhood are likely to become radicalized by the events and turn to jihadist groups. This could force the military to expand the security apparatus — although, this thought is unlikely to scare the generals.

Thirdly, the military assumed that the international community would accept its interference. This assumption, too, appears to have been correct. Twelve billion US dollars support from the Gulf states within just a couple of days suggest that arrangements were made prior to the coup. The financial support also demonstrates the relief of the ruling dynasties in Saudi Arabia, Kuwait, and the United Arab Emirates about the change of power in Cairo. All three had been worried that the success of the Muslim Brotherhood in Egypt would embolden the opposition in their own countries.

The generals can also rely on their traditional allies, the US, and the EU. Washington will not turn its back on one of its most important allies in the Middle East because of a coup. The annual military support of $1.3 billion is not in danger. And despite some critical words, the European states also seem to rely on continuity. In the medium term, the relationship between Egypt and its partners in the west could even improve. If the new leadership in Cairo ends the trials against foreign NGOs, even the last doubts in western capitals are likely to fade.

In the short term, the plan of the military might be successful. The generals could continue to hold unchecked power as an institution outside of the political system. The financial support from abroad and the improvement of domestic security could temporarily stabilize the political and economic situation in Egypt. Ideally, Egypt would develop into a flawed democracy, with free elections and political participation in a framework that is controlled by the military — a Mubarak regime light.

However, under these circumstances it will be impossible to reform the bloated and corrupt state apparatus, which is too closely intertwined with the military itself. A more fundamental modernization of the Egyptian economy is unrealistic, not only because the generals will not voluntarily surrender control over their economic empire. Social conflicts can be contained, but by no means resolved. In the long term, the plan of the military will not lead to stability in Egypt.

*[Note: A German version of this article was originally published by Süddeutsche Zeitung.]