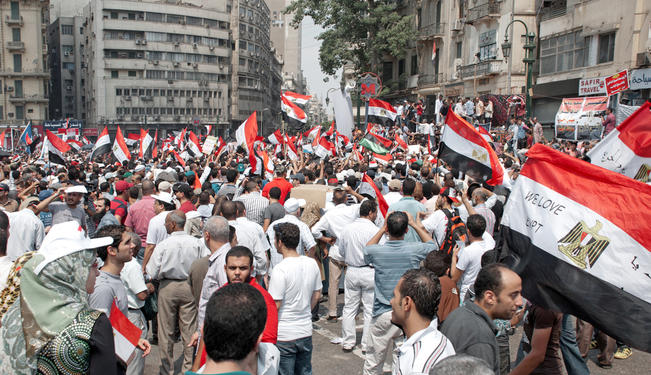 The end goal of a new uprising may thwart progress on Egypt’s path to democracy.

Before Mohammad Morsi was elected president one year ago, I made a few predictions about Egypt’s political path that turned out to be true. Although I grieved for a few days once I found out which candidates made it to the runoff election, I took a deep breath and weighed my options: a military commander at the core of the old regime, Ahmed Shafiq, or an Islamist with the backing of the best organized underground opposition party in Egypt for decades with Morsi as their candidate.

With the revolution at the heart of my decision, I bit my tongue and cast a ballot for Morsi because I predicted that the Muslim Brotherhood held the most political weight to mount an opposition to the Supreme Council of the Armed Forces (SCAF). In the wake of the January 25 revolution, the Egyptian Armed Forces, with a sequence of constitutional declarations and sheer military might, maintained an effective power monopoly over the country until the Muslim Brothers were able to negotiate a soft transfer of power out of the hands of the generals.

Let us not forget that the so-called "old regime" was the military establishment since 1952. For the January 25 revolution, this transfer of authority was a vital step towards Egypt’s realization of democracy. For the first time in more than 60 years, power in Egypt belonged to an elected civilian authority rather than a cadre of military elites.

Optimism and Despair After Morsi’s election

Morsi’s election brought simultaneous waves of optimism and despair to different segments of Egyptian society. Some in Egypt saw Morsi as an everyman’s president, one who understood the plight of the average Egyptian. They saw him as the humble alternative to Shafiq, a poster-boy representative of Egypt’s elitist Mubarak guard. Revolutionary liberals, such as Wael Ghoneim and many members of the April 6 Youth Movement, though unsatisfied with Brotherhood leadership, cheered on Morsi’s victory as a defeat of the Mubarak establishment.

Other Egyptians feared Morsi’s election would be the beginning of the end of a secular Egypt. Many Christians felt that the Muslim Brotherhood would bring about the full Islamization of Egyptian society, exacerbating anti-Christian sentiments already present in certain radical or uneducated circles and further fueling sectarian tensions. While most Egyptians emphasize religious coexistence, a negative and fearful — in some cases Islamophobic — rhetoric in the Egyptian media exacerbated tensions rather than bringing about a culture of mutual understanding and progress.

However, fear that the conservative Brotherhood would use religion to exploit mainly uneducated Egyptians to advance self-satisfying political agendas held true in numerous instances. Far too often, religious ideologies in a political setting are abused to drive self-serving agendas, as the core truths and values of the religion are cast aside.

Morsi’s opponents also feared that once the Brotherhood assumed power, they could never be ousted because they would have brainwashed a large enough segment of undereducated Egyptian society into believing that voting for the Brotherhood was a shortcut to heaven; which brings me to my second prediction.

Despite initial fears of an Islamist political monopoly, a vibrant culture of political opposition thrives in Egypt. Even given the (often exaggerated and pessimistic) fears of a Brotherhood-dominated administration, the opposition to the ruling elite in Egypt has never been more vocal or visible in media and society. Even less affluent and less educated Egyptians see the Brotherhood’s flaws.

I told people last year not to fear the Muslim Brotherhood. Rather, predicting the inevitable failures of the incoming administration, I encouraged my anti-Morsi friends and family to begin to organize an opposition against them. Now, we can see how effective a mere two-month campaign by volunteers in metro stops and street corners has been in garnering opposition. This campaign, dubbed Tamarod! (Rebel!), claims to have collected over 22 million signatures calling for a vote of no-confidence against Morsi — that is more votes than the ones which put him in office.

The failures of Morsi’s first term are obvious to any political observer. Egypt lacks a clear vision — save a few lofty politically convenient promises any politician can make to the whims of populist sentiment. The Shura, Egypt’s upper house, is a circus. Videos of petty fights, shouting matches, and dismal shows of professionalism, circulate the web. Meanwhile, no substantive laws on civil rights or any government initiatives have been drafted. The People’s Assembly, the lower house, does not even exist. No comprehensive plans for revitalizing tourism — the lifeblood of Egypt’s economic health — have been proposed. Nor have we seen any legitimate action plans, initiatives, or substantive agendas for addressing pretty much anything that matters in Egypt.

Now, I am a critic of Morsi as much as any Egyptian liberal and I cannot wait for the day he leaves office. But we must think carefully about the implications of an early boot for Morsi on the development of Egyptian democracy.

A political vacuum after a no-confidence vote for Morsi would pave the way for the SCAF to step into power once again, meaning a full step backward for the revolution. In effect, the revolution would slip back to where it was after Mubarak’s downfall. Did we really let this two-year struggle of political turmoil and chaos take place, just to see it repeat once again? Do we want a coup d’état?

This is the same military that backed and staffed three successive dictatorial regimes. Have we forgotten the days of Hussein Tantawi when thousands of Egyptians were held under "emergency powers" and tried under military tribunals with the least consideration of due process or fair representation? Remember that the SCAF ordered soldiers to set fire to the tents in Tahrir, as soldiers massacred revolutionary martyrs during the Mohammed Mahmoud clashes, little more than a year ago.

This is the same military cadre which uses its yearly billions of dollar installments of "military aid" from the United States on weapons rather than the needs of the impoverished. This is the same military which for years has lacked any semblance of economic transparency. To this day, hundreds of real estate projects, private clubs, companies, and secret economic agendas remain completely untethered and unaccountable to the people.

The Egyptian military-industrial machine runs without any oversight, functioning for the interest of its elite establishment — most of whom continue to lead a privileged life while Egyptian families struggle to fill dinner tables. The risk that progress will stagnate for even longer makes me think twice about joining the protests, as much as my innate revolutionary spirit wants me to.

My point is that we need to work on developing a functional, inclusive, and civilian democratic system — even if it means grinding our teeth with the Muslim Brotherhood just a bit longer — lest we relapse into a continuous cycle of failed leader, uprising, military rule, uprising, failed leader, and so on. Let us be realistic; of the list of government failures that Tamarod calls out, how many of those will a power swap from above actually solve? How much responsibility does the executive branch hold for government failures as opposed to the inefficiencies and red tape of Egyptian bureaucracy? And is the gas crisis not a failure of Egyptian companies to negotiate more shipments for import?

Let us use this week to remind us how strong opposition to the Muslim Brotherhood is once we organize ourselves effectively. We must bring this momentum forward into a campaign to defeat the Brotherhood peacefully — next time elections are held. Let Egypt prove democracy to itself.

Allow us to let coolness trump chaos this week. We as the Egyptian people must continue to make our demands heard and keep the government accountable to its promises. However, as we learned with the ouster of Mubarak, expecting society or economy to change with the swapping of a figurehead is naive to say the least. We can sit-in, protest, and picket all we want, but until we embody the change we want to see in the society around us, Egypt will never move forward.