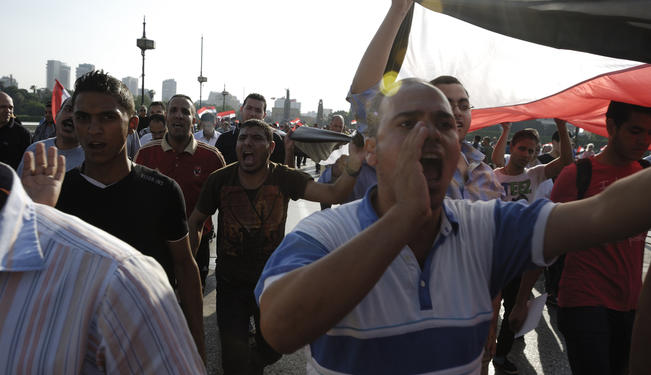 Egyptians must first learn to quit scapegoating and accept responsibility for their actions.

If Egypt’s revolution is to ever move forward, the country must cultivate a different mentality than that of our past. When millions took to the streets on June 30, Egypt was given a second chance at democracy. We, as Egyptians, cannot squander this newly opened door for societal progress and a better Egypt. As we seek to redefine ourselves as a better nation, correct the revolution’s path, and advance ideologically as a nation, it is vital that we recognize and address the fatal flaws in our mentality. We must analyze the roots of our national flaws, abandon our bad habits, and implement the solutions that will improve our country.

Anyone familiar with Egypt will realize the tendency in the Egyptian psyche to shirk responsibility for its problems. This laizzez-faire mentality prevails as much on a personal level as it does on a societal level. It is much easier – as conventional Egyptian wisdom holds (at an incredible flaw) – to shed responsibility for our actions and blame someone else for our problems.

Examples of this micro-level lack of responsibility seem to show their ugly head anytime I ride in a car with an Egyptian friend. Numerous times, I have watched in horror as my fellow countrymen roll down the window and throw wrappers, cans, and plastic bags out the window because “someone is paid to clean it up,” I am always told. Then, when trash piles up on the side of the streets and putrid smells plague our once breathtaking allies of old Cairo, we curse the government for failing its duties. In Egypt, we always expect someone else to clean up after our misdeeds. Egyptians want somebody else to bear the burden of blame so that we don’t have to deal with it.

This instance shows a mere snippet of the reality of life in Egypt. This recurring mentality – failing without owning up, let alone seeking to redress the issue – is a key reason why so many facets of Egyptian society lay in disarray.

Unfortunately, this issue stretches all the way to the top in Egypt. Political entities are as keen to make up stories to shift blame away from themselves as any Egyptian. For years, the Egyptian government has instigated rumors of American, Zionist, or Iranian conspiracies (even spinning bizarre combinations of the three) to explain away dissent movements. A few months after the January 25 revolution, I spoke to one of Hosni Mubarak’s lawyers and almost every other word that came out of his mouth in trying to dismiss the revolution was “America” and “Israel.” The Mubarak regime used this ploy for years in order to shirk responsibility for its own failures as a government, to justify its totalitarian regime and its subsequent violent crackdowns, and to portray any dissent as illegitimate to the masses.

Under this same dim light, when Egyptians called out the failures of Mohammed Morsi’s Muslim Brotherhood-backed government to take action for the country’s problems, as anti-Morsi protests picked up steam last November, the Brotherhood tried to use the same tactics, accusing key faces of its opposition – Mohammed El-Baradei, Hamdeen Sabbahy, and Amr Moussa – of involvement in a Zionist plot to stir unrest.

Again, after the ousting of Morsi, the Brotherhood, according to the Washington Post, spread rumors on its website that the new interim president was secretly Jewish. Ikhwanweb pulled the piece a few hours after it was posted, but sure enough, it was able to start a rumor that spread in Brotherhood circles intended to embolden the resolve at the pro-Morsi Raba’a sit-in in Cairo’s Nasr City neighborhood. Nonetheless, the Brotherhood tried to save face to its constituents and scapegoated blame for its failure to maintain political power by implicating a Jewish third party – not to mention the disgusting racism inherent in demonizing a particular religion. Meanwhile, the internal failures of the Brotherhood, and their responsibility for instigating problems remained unaddressed.

Egypt’s liberal opposition is guilty of the same responsibility-shirking habit. When Morsi won the presidential election in 2012, many liberals immediately blamed the United States for swaying the results, believing that the Brotherhood could never have won without the United States’ covert interference. The losing liberal bloc did not stop to think about how the Brotherhood mobilized their supporters, reached out to a wider base in Egypt’s smaller towns and villages, and utilized its political experience derived from functioning as an effective underground movement, especially since the 1970s. Instead of learning from the electoral loss and focusing efforts to improve their next campaign, Egyptian liberals shifted the responsibility of their own failures to compete with the Brotherhood’s political machine and blamed their loss on the United States’ interference.

Moreover, after the series of violent clashes between heated Morsi supporters and opponents following the former president’s ouster, rumors that a combination of Palestinian and Syrian Islamist infiltrators were responsible for stirring violence spread on the Egyptian street. Media in Egypt blamed Al Jazeera, one of the few media outlets in Egypt that aired the Raba’a protest, for inciting violence, while sensationalist reporting across the media circuit fanned the flames of the crisis on the ground. Last month, journalists demanded that the Al Jazeera correspondent be thrown out of a military press conference, and the government called for its bureau chief’s arrest.

The anti-American sentiment sweeping Egypt in the wake of the June 30 uprising is another clear testament to this “blame game” mentality. Picket signs of a bearded Barack Obama dubbed “Obama bin Laden” and a devil-horned Anne Patterson, the chief US diplomat, floating around Tahrir Square during a mass show of support for the army on July 7 epitomized this third party demonization. Protesters blamed the US administration for bolstering the Muslim Brotherhood, instigating terrorism, while some rumors on the street even went so far as to suggest that the US was sending two aircraft carriers to the Egyptian coastline to pressure the military into reinstating Morsi. Meanwhile, pro-Morsi supporters on the other side of the city in Raba’a accused the US of supporting a “coup” and failing to back democracy and recently marched to the American embassy in protest.

Popular Power and the Middle Ground

Both sides refuse to address the legitimate grievances of the other and engage in a constructive dialogue – what Egypt needs most – and instead place blame on the US for crafting Egypt’s own political reality behind the scenes. We must instead look at our crises impartially, accept each other’s right to disagree, reconcile our differences, and work to find a middle ground.

Democracy means that the government derives its power from the people. What then is popular power when the people refuse to assume responsibility for their own problems? When we succumb to rumors and media brainwashing, we create fear and negativity, the most powerful force in the country. Without assuming responsibility we can never look at ourselves, figure out where we went wrong, learn from our mistakes, and work to change for the better. Egyptians across all walks of life and on both sides of the political spectrum must master their own destinies without relying upon the convenience of blaming others. We must be honest with ourselves, both on a personal level to become better human beings and also on a governmental level so that our policies can actually bring Egypt forward.

*[Note: A version of this article originally appeared in the Egyptian Gazette.]