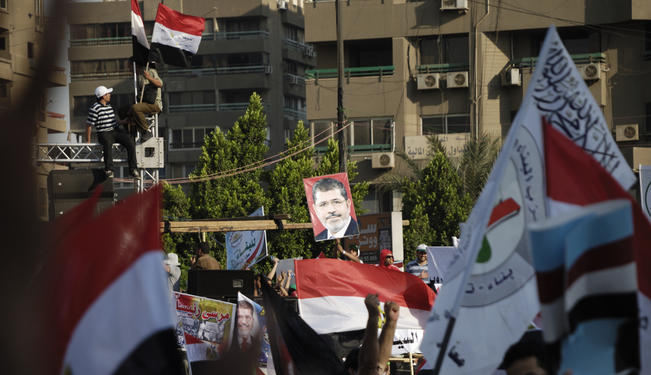 Morsi’s ouster is best understood as a termination of the Brotherhood’s partner status.

As crowds proudly marched into Tahrir Square in the afternoon of January 25, 2011, they knew that they were living a critical moment. A generation of Egyptians that had spent its entire life under Mubarak’s despotic rule was enjoying the taste of freedom for the first time. It was a magical moment. As if by implicit consensus, the crowds knew that Tahrir Square, where all begins and all ends, the most public of all public places, was their destination. Sure enough, three days later, the square was decisively captured by anti-Mubarak protesters who did not leave until Mubarak was ousted.

This story was an inspiration to many across the globe. In a world tightly and heavily dominated by capitalist and military might, witnessing a glimpse of people power in its raw form, especially in a region with a long history of autocratic regimes, was certainly a cause for celebration and hope. Two and a half years later, however, the world — and Egypt is no exception — is still just as dominated by the inseparable alliance of military power and capitalist interest, which leaves very little room for idealism. Supporters of people power, therefore, have no choice but to refine their outlook in a realistic way.

What the Egyptian revolution has taught us so far is that in this heavily structured and invasive world of material hegemony, spontaneous and courageous outbursts of expressions of people power can determine the direction of events, but never decisively impose them. The classic revolutionary model (that, significantly, appears to still inspire young revolutionaries’ thought and discourse) of oppressed masses taking over and bringing down the corrupt institutions in their entirety is no longer available. The heavy structures of solid organized power are no longer vulnerable to the courageous outbursts of fluid and spontaneous power.

Thinking about the often heartbreaking and almost always puzzling events of the Egyptian revolution in terms of solid versus fluid powers can be illuminating; although no one should claim (though many do) to present a model that definitively explains those complex events in their entirety. According to this view, the events that led to the June 30 protests, followed by Mohammed Morsi’s ouster and their still ongoing bloody aftermath, can be understood as a dismissal by the Egyptian military of the Muslim Brotherhood’s status as an allied structured power, with which it coordinated every step of the post-Mubarak transition.

The US’ Iranian Complex and Egypt

The internationally-shaped structures of material power, primarily represented in Egypt by the military, are inevitably influenced by the global workings and tendencies of the military-capitalist system. In his 1981 book, Covering Islam, Edward Said argued in characteristically compelling fashion that the Muslim world only became visible in American media after the Iranian revolution and hostage crisis in 1979. The trauma of the loss of American influence in such a pivotal country created what one may call the Iranian complex. Simply put, the Iranian complex represents the fear of spontaneous and unpredictable mass movements that can threaten American interests by replacing a US-friendly regime with a US-hostile one. This fear was decisive in determining American reactions to the events in Egypt, and the Arab world in general.

The US has for decades invested considerable amounts of money and diplomatic energy to ensure that Egypt is ruled by a regime that is sympathetic towards it. Sympathy, in this case, as CNN expressed in a report bluntly titled “Why Egypt Matters,” comes down to the preservation of peace with Israel, and the smooth running of the Suez Canal. As a result, US policy in Egypt has been consistently and often naively motivated by a drive towards stabilization, in any way and at any cost. Relentless and uncritical attempts to stabilize are understandable once we realize the depth with which the Iranian complex has affected US policy in the region it conveniently refers to as the Middle East.

It is no secret that the Egyptian military, the solid Egyptian power par excellence, is, to put it mildly, on friendly terms with the US. The exact dynamics of decision-making that this alliance produces are beyond our inquiry, and do not matter much. It is clear, nevertheless, that the Egyptian military was also consistently and, at times, clumsily pushing for a quick stabilization of Egypt’s political institutions at almost every step since the removal of Mubarak in February 2011.

The Drive for Stabilization

The drive for stabilization was reflected in the military’s insistence on building and preserving constitutional structures at any cost. The only available solid power that appeared as a viable candidate to partner with the military in the stabilization efforts was the Muslim Brotherhood. Thus, the Supreme Council of the Armed Forces (SCAF) rushed to design a Muslim Brotherhood-approved constitutional plan by virtue of which the constitutional drafting committee would be formed by a parliament to be elected as soon as possible. The result, quite obviously, was a Brotherhood-dominated transition that left the numerous, but scattered, politicized segments of Egyptian society feeling betrayed and alienated.

The army-Brotherhood alliance appeared to progress steadily at the expense of all other political forces, leading to Morsi’s election as the first Egyptian post-revolution president. The alliance, however, seemed to fall apart throughout the first year of Morsi’s presidency. As the Brotherhood’s strategy in governance that focused on increasing control of the Egyptian state by political clients and allies became clear, it became certain that Morsi and his organization were incapable of imposing stability and ensuring the recovery of the largely dysfunctional Egyptian state.

Popular anger and intra-government resistance to Morsi appeared to grow. Certainly, this was partially the work of former Mubarak clients attempting to regain their privileged positions. Nevertheless, it was also just as obvious that Morsi and the Brotherhood were aggressively and consistently using the state to consolidate their dominance, which backfired in the form of angry masses who felt their country was being hijacked. Inefficacy, exclusionary and sectarian discourse, and failure to cooperate with state authorities may only be part of the picture. Much of the military’s post-June 30 statements suggests a more direct collision between the former partners on matters that fall plainly within the army’s domain, such as national security and the monopoly over the use of armed power.

Indication and Imposition of Change

In any case, as popular and official resistance and discontent grew, as well as the rift between the presidency and the military, it became clear that the Muslim Brotherhood was not the solid, stabilizing power which they and the SCAF once believed they were. Between the massive anti-Morsi protests and his removal from office on July 3, the army’s position and the demands of the Tahrir Square protesters coincided once again. Similar to Mubarak’s ouster, this was a situation in which popular mobilization indicated the direction of change and solid, structured power imposed it.

Morsi’s ouster by the army signaled the end of the military-Brotherhood alliance that shaped Egypt’s disastrous transition since February 11, 2011. The Brotherhood’s reaction to these developments was nothing but a persistent and stubborn attempt to restore the old myth that brought them to power: that without the Brotherhood there can be no stability. Carefully orchestrated protests and sit-ins were designed to occupy and paralyze vital parts of Cairo and other cities. Sadly, as was the case in the Maspero massacre and Mohammed Mahmoud clashes that took place during the military-Brotherhood reign, those who come in confrontation with the security forces continue to be crushed.

The army will not back down, and Morsi will not be reinstated. Even the Brotherhood’s leaders, I am sure, know that. But what are the revolutionaries and non-Islamist forces doing? It is becoming increasingly clear that the direct imposition of people power using sit-ins, and the procedural subjugation of the army to elected civilian officials, were, for the most part, popular myths. Only structured, solid power can impose change, and the young revolutionaries of Egypt have no other option than to “solidify.”

The political parties that emerged after Mubarak’s ouster are promising platforms, but those, quite unfortunately, are urban intellectual phenomena. To “solidify,” those groups need to be able to appeal to those segments that truly affect the material dynamics of the structured Egyptian state: the millions of workers, farmers and bureaucrats upon which the state depends, and who are most directly affected by Egypt’s political turmoil. This project of appeal and assimilation can only take place by carefully-formulated programs that address those segments’ material interests in the Egyptian state.

For decades, the Brotherhood managed to broaden its bases using nothing but an impoverished and narrow rhetoric of identity. Now that the myth of the Brotherhood is over, Egyptian revolutionaries need to let go of the impotent identity politics of the idealized cosmopolitan bourgeois city, and adopt a realistic program that addresses the material needs of the millions of neglected but influential masses. Otherwise, the saga of military dominance and occasional bloody popular outbursts will go on for longer than anyone hopes.