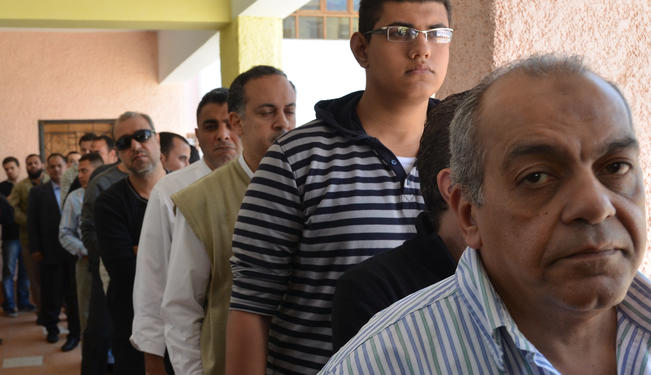 The EU should not monitor the Egyptian referendum, but instead push for political inclusion.

The military coup of July 2013 did not only topple the government of President Mohammed Morsi, but it also suspended Egypt’s constitution. The constitution had been adopted through a referendum in December 2012 – only seven months prior to the ouster of Morsi. It was heavily criticized by opponents of the Muslim Brotherhood, who saw it as an attempt to integrate theocratic elements into Egypt’s political system.

Judge Adly Mansour – who is currently Egypt's interim president under the military leadership – was tasked with starting a new constitutional process after the coup. Mansour nominated a 50-member committee via decree, which developed a draft constitution within three months. The Egyptian population is supposed to vote on this draft in another referendum on January 14-15.

The new draft constitution displays less Islamic traits than Morsi’s preceding document. Civil and women’s rights as well as the rights of selected minorities are partially strengthened. Overall, however, the draft codifies structures which formed the backbone of authoritarian rule in the past. In particular, the extensive privileges of the state’s various security apparatuses are poised to stand in the way of Egypt's democratization. The Egyptian military will remain a state within the state and will not subordinate itself under democratic control.

The constitutional process itself proved to be as problematic as its result. The committee’s sessions, led by the former Egyptian foreign minister and secretary-general of the Arab League, Amr Moussa, were closed to the public. A wider societal discussion about the new constitution did not take place. More importantly, the composition of the committee, which was dominated by members of state or semi-state institutions, was deliberately one-sided. Whereas in 2012 when the Constituent Assembly had been dominated by Islamists, this time around they were almost completely excluded. Only one representative of the Salafist al-Nour party, which backed the military coup, and one dissident from the Muslim Brotherhood were part of the committee.

Thus, a substantial segment of the Egyptian public was not involved in the process of drafting the new constitution. However, the groups who were excluded, especially the people who voted for the Brotherhood in parliamentary and presidential elections in recent years, are still relevant in Egyptian society. Consequently,even if participation in the referendum and approval of the draft constitution is higher than in the 2012 vote, its overall acceptance is likely to remain limited.

The new political leadership in Cairo seems to be aware of this dilemma. Therefore,it has tried to enhance the status of the referendum by allowing international observers.The foreseeable lack of societal legitimacy is supposed to be partly compensated by the presence of foreign observers.

This is a remarkable departure from the position of Egypt's leadership in 2011. Back then, the military council that governed the country after the fall of Hosni Mubarak decided to reject an offer by the European Union (EU) to send a monitoring mission for the parliamentary elections. The aim was to demonstrate that Egypt was able to manage its political transformation from an authoritarian regime to a democracy on its own. This mirrored the Egyptian pride in having ended Mubarak’s rule without large-scale outside support. The mere holding of elections promised the highest possible degree of societal legitimacy. Therefore, the regime concluded that it could make the transition without additionalinternational legitimacy by external election observation.

In this context, one has to question the meaningfulness of an international monitoring mission for the upcoming referendum. Even if the voting process itself is conducted in a free and fair manner, right now Egypt's political climate is marked by repression, fear and exclusion. This is a key difference to the situation in which the 2012 constitutional referendum was held. Although the Muslim Brotherhood had abused their newly-won state power to mobilize for the draft constitution in 2012, there were no comparable mass arrests and police actions that intimated political opponents.

The current referendum will definitely not contribute to the inclusion of political forces that were marginalized since Morsi’s ouster. The parties and groups under the umbrella of the Brotherhood-led Anti-Coup Alliance have already announced their intention to boycott the referendum. Their inclusion should be the main goal of international efforts because unless all relevant forces of Egyptian society can participate in the process of shaping Egypt’s political future, further polarization and fragmentation will loom. Sending observers, as announced by the EU, mainly benefits the regime. Instead, the international community should campaign for the release of political prisoners and the abolishment of repressive anti-protest and NGO-laws, as well as the build-up of a free media landscape.

*[This article was originally published by Stiftung Wissenschaft und Politik (SWP), and translated from German to English by Manuel Langendorf. It was updated on January 20, 2014.]