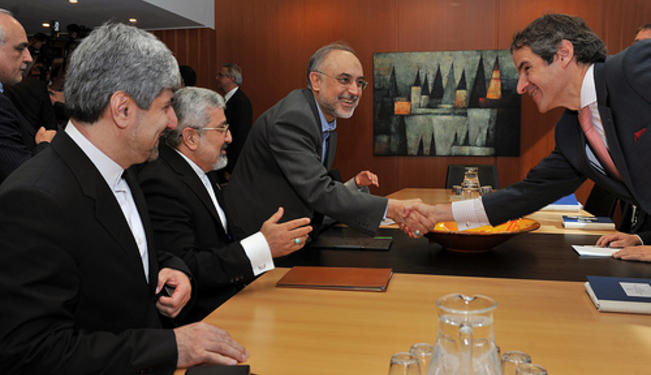 Shirin Shafaie presents an exclusive interview with Peter Jenkins regarding Iran’s nuclear issue and the failure of Western diplomacy in dealing with it. Mr. Jenkins was the UK Permanent Representative to the IAEA in Vienna from 2001 to 2006. This is the second of three parts. Read Part 1 here.

Shafaie: So there is a huge level of double standards and hypocrisy that we see in international law in general; why should Iranians feel obliged to abide by these rules?

Jenkins: They clearly haven’t felt obliged, since they have ignored the Security Council resolutions.

Shafaie: Yes, but they still allow IAEA inspectors into the country. In fact a few days ago [29 January 2012] a delegation of IAEA inspectors went to Iran and I would like to ask you something about that. The delegation was led by Mr Nakaerts and four other IAEA officials. Mr Nakaerts was someone who helped write the November Report, after visiting the Natanz facility and Fordow and the Heavy Water plant in Arak and conducting hours of inspection in Iran. But at the end when he wrote the report it was more in line with the American policies and allegations against Iran and he used outdated information which were provided to the IAEA by an unnamed state, namely Israel.

So the question is how do you see the IAEA in terms of being professional and unbiased; given the importance of Iran’s nuclear case and the urgent need for some confidence building measures especially on the side of the IAEA?

Jenkins: I think you are a bit unfair on Mr Nakaerts because if you read the November Report it does not say that anything wrong has taken place at Natanz or Fordow, and the report says yet again that all the nuclear material declared by Iran has been accounted for, which means that there has been no diversion.

Note as well that what all the fuss is about now, and what the November Report fuss was about, are certain studies that are alleged to have taken place. Those studies are not “nuclear activities”, they are “nuclear-related activities”; in other words they fall outside the scope of NPT Safeguards. So uncertainties over those studies ought not to have prevented the IAEA from finding that there were no undeclared nuclear activities in Iran.

Shafaie: But would this satisfy the Security Council and Germany? Or would they still demand suspension? Something which Iran cannot and will not (and does not have to) accept?

Jenkins: Maybe not. I am not saying it would. All I am saying is that it would be harder to argue that Iran is somehow violating the NPT – and represents a threat to all and sundry, is going to trigger a nuclear arms race in the Middle East, and whatever else Iran’s enemies love to throw into the pot – if there were a public assurance from the IAEA that there are no undeclared nuclear (as opposed to “nuclear-related”!) activities or material in Iran.

Shafaie: So while we are talking about this I would like to mention the issue of leaking of the IAEA information to third parties. Many Iranians believe that this has been the main reason for assassination of Iranian scientists. When the IAEA team arrived in Iran on January 29 of this year, a large group of Iranians and Iranian students gathered at the airport while holding pictures of the recently assassinated Iranian scientist, Mostafa Ahmadi Roshan. They were trying to put pressure on the Iranian officials to bring this issue to the attention of the IAEA inspectors. And while Iranian officials are trying to keep the environment professional, they are under a lot of pressure from the Majles and student unions. For example, four large student unions issued a letter demanding to meet with the IAEA inspectors to talk about this.

So what confidence building measures has the IAEA taken to build confidence on its own side? And do you think that these concerns on the Iranian side, that IAEA leaks information to third parties, are valid or reasonable?

Jenkins: I think one is not entitled to assume that the IAEA leaks information. One needs evidence before one can make these accusations. From what you have told me, people are simply making a connection. They are saying that these scientists were known to the IAEA and these scientists have been murdered, therefore the IAEA must have leaked information.

Shafaie: But their names have appeared in the IAEA reports! And it is no secret that Israel and the US provide the IAEA with “intelligence” and many suspect that in return they benefit from the intelligence that the IAEA provides for them. In fact one reason that Iran is reluctant to adopt the Additional Protocol again is that it does not want to provide Israel with the exact information that it would need to attack Iran’s nuclear facilities.

Jenkins: I see. But maybe they were already known independently of the IAEA. I mean, we must not be naive; certain countries have their intelligence agencies focused on what’s happening in Iran. We cannot be certain that those countries were not capable of finding out for themselves that these scientists worked for the Iranian nuclear program. So I think that it is better to keep the IAEA out of this because, if we are ever going to emerge from this crisis peacefully, the IAEA’s role is going to be crucial. We will only be able to persuade the West to accept enrichment in Iran if the IAEA is allowed to monitor Iran’s nuclear program and to reassure the rest of the world that Iran is not cheating on its NPT obligations. So it is not helpful to undermine the IAEA or to spread distrust of the IAEA.

Shafaie: Of course. Just one more thing on this issue; don’t you think that the IAEA or the UN Security Council should have at least vocally condemned these acts [of assassination and sabotage] in order to support public opinion inside Iran which is putting pressure on their politicians and officials, saying the IAEA is being silent on this issue?

Jenkins: I don’t really think it is for the IAEA to pronounce on something like that because it is not a political body, it is a technical body. But the UN Security Council certainly could, if it wanted to, pronounce on that and, personally I would have been happy to see them do so. Maybe what they would say is that they lack evidence for who was responsible. But you could deplore a murder without blaming anyone in particular. You could say that you have noticed that this murder has taken place and you deplore it.

Read part 3 of "Diplomatic Miscalculations and the Threat of War" next week on March 7.