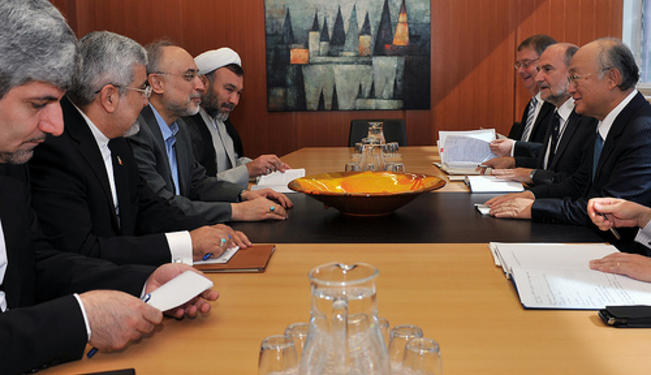 Shirin Shafaie presents an exclusive interview with Peter Jenkins regarding Iran’s nuclear issue and the failure of Western diplomacy in dealing with it. Mr. Jenkins was the UK Permanent Representative to the IAEA in Vienna from 2001 to 2006. This is the first of three parts.

Shafaie: It appears from your recent Chatham House lecture and from your recent article published in The Telegraph that you have some differences with the official Western policies with respect to Iran’s nuclear issue. Is this your view that neither the Nuclear Non-Proliferation Treaty (NPT) nor the International Atomic Energy Agency (IAEA) statute require Iran to suspend or abandon enrichment activities allowed under those treaties?

Jenkins: It is certainly my opinion that the NPT does not require Iran to suspend nuclear enrichment. Iran concealed parts of its nuclear program for 18 years but after 2002, as far as I can judge based on my work with the IAEA, Iran came back into compliance with its Safeguards Agreement under the NPT. So Iran is entitled to enjoy its NPT rights to peaceful nuclear energy. However, because of these years of concealment prior to 2003, Iran’s neighbours are understandably anxious and they hope that Iran can go beyond the strict letter of the NPT and volunteer some additional measures to restore confidence in the purpose of Iran’s nuclear programme, for example apply the Additional Protocol.

Another measure could be a permanent on-site IAEA inspector presence at sensitive plants. Back in 2005 when Iran was talking to the UK, France and Germany, the Iranian negotiators suggested that they might be ready to offer this at the Natanz enrichment plant.

In 2003 they voluntarily agreed to apply the Additional Protocol as part of the Tehran Agreement with the EU3 (UK, France and Germany). The problem with that agreement was that it contained ambiguities, like many diplomatic agreements. The EU3 wanted the Tehran Agreement to lead to the abandonment of enrichment by Iran. When Iran finally understood that this was the European objective, they ceased to honour the Agreement; in other words they resumed enrichment-related activities. That led the Europeans to feel entitled to arrange for Iran to be reported to the Security Council.

Shafaie: When Iran as you said stopped honouring the Additional Protocol…

Shafaie: And that was why the Europeans reported Iran to the Security Council?

And then there was the counter-reaction from Iran which was to say that now you have reported us to the Security Council, we are not going to apply the Additional Protocol anymore. So the whole Tehran Agreement, which was a good agreement, unravelled.

Shafaie: So was this the first time that the demand for suspension was made of Iran? Why did the Europeans start by asking for an extra legal demand from Iran? And why did they want to make sure that Iran is bound by law (i.e. the Security Council) to eventually abandon its enrichment program, which you said Iran has a right to pursue? Was it because ultimately Europeans did not want Iran to have a national peaceful nuclear program? Do you regret having reported Iran to the Security Council while you could have solved the problem diplomatically with your European, IAEA and Iranian colleagues?

Jenkins: The West did not want Iran to have an enrichment capability. That is why the Security Council made a legally binding “demand” (which was indeed the first such demand). The Council is entitled to over-ride Iran’s or any other state’s treaty rights in the interest of maintaining the peace.

I do not regret it because at the time I believed Iran wanted to acquire nuclear weapons and I saw suspension as a way of preventing Iran from acquiring the enrichment capability it would need to manufacture these weapons, since EU/Iran diplomacy had failed. Now I see things differently, because since 2005 US and Israeli intelligence experts have said they have no evidence that Iran’s leaders have decided to make nuclear weapons. I believe that a change of threat assessment requires the West to change its policy response. Instead, to my regret Western policy-makers remain stuck in a groove, like a gramophone needle on an old record.

Shafaie: Going back to the issue of the Security Council and the UN Chapter VII which has been used by the Council’s permanent members to impose sanctions on Iran; do you think that such usage has been legitimate?

Jenkins: Well this is a very interesting point.

Jenkins: Well, the EU countries brought Iran to the Security Council to make suspension mandatory. They believed the Security Council could do that using the powers conferred on it under Chapter VII, since at the time they believed that Iran’s enrichment programme represented a threat to the peace. I do not know whether they still believe that. If they do, they seem to have been unable to persuade all members of the Council to share that view.

Shafaie: Doesn’t that make the Security Council Resolutions (and in effect UN sanctions) on Iran illegal?

Jenkins: The view of most British legal experts is that the Security Council ultimately can do what it wants. The Security Council is like a parliament: it is a sovereign body and if it chooses to ignore its own rules it can do so. So say these legal experts. I am not a legal expert and so I have to accept that these resolutions are “legal”. I feel entitled to say, however, that the absence of a determination under Article 39, that Iran’s nuclear activities constitute a threat to the peace, makes me ask myself whether the use of Chapter VII to impose “international obligations” on Iran is really just, or whether it is not rather what we British call “sharp practice”.

Jenkins: Its own rules!

Read Part 2 of "Diplomatic Miscalculations and the Threat of War" next week on February 29.