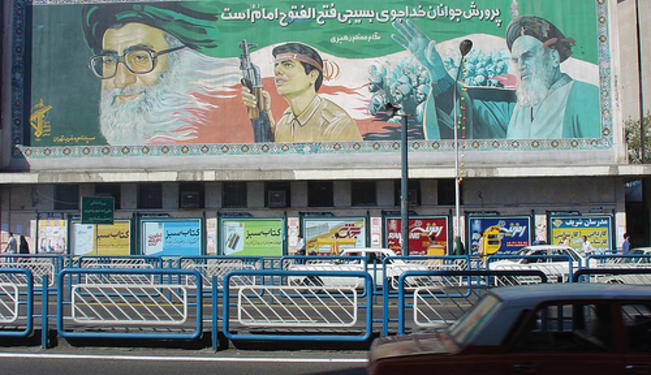 Analysis on the attack on the British embassy in Tehran, and the underlying politics between the international community and Iran.

The disgraceful attack by hardline Basijis – the same group that beat and killed peaceful demonstrators in Iran in 2009 – against the British embassy in Tehran appears on the surface to be a response to Britain's role in imposing crippling sanctions on Iran. The US and the EU are preparing new sanctions on Iran, including potentially Central Bank and oil sanctions. And there has been an onslaught of computer viruses, assassinations of Iranian scientists, and several Iranian facilities have blown up in just a few weeks. Viewing the attack on the British embassy as a response to the increasing pressure Iran is faced with may be accurate. With Iran trying to prove to the West that it doesn't respond to pressure, Tehran might have calculated that upping the ante may make that message crystal clear.

But there is more to this picture.

While the actions of the Basij government militia takes place in a foreign policy context and has clear implications for Iran's relations with the West, there are also some significant domestic political roots to this crisis.

Consider the following. The Obama administration has been on the offensive in the past few weeks, ratcheting up pressure on Iran through sanctions and measures to isolate Iran. Yet, behind the scenes, conversations have been held with partners in the UN Security Council – not necessarily driven by the United States – to restart diplomacy, centered on the nuclear issue. Sometimes early in 2012, another meeting between the permanent members of the UN Security Council plus Germany (P5+1) and Iran have been in the making.

The Ahmadinejad government has given some public indications that it would welcome such talks. In conversations with Russia, the Iranians have further signaled that it was ready for talks, whether based on some version of the Russian proposal for a step-by-step process or on Iran’s offer to end enrichment at 20% in return for having the West sell it fuel rods for its Tehran Research Reactor. (Washington gave this reactor to Iran more than 40 years ago, and today it produces isotopes for approximately 850,000 Iranian cancer patients.)

But Ahmadinejad’s domestic rivals, mainly conservatives around the current Speaker of the Parliament Ali Larijani, is in no mood to permit a new round of diplomacy where the Ahmadinejad government would lead the talks. As part of the political infighting between the conservatives themselves, fueled by the upcoming parliamentarian elections, the parliament has under Larijani’s leadership gone to great lengths to paralyze the Ahmadinejad government and turn him into a lame duck.

One apparent avenue for the Larijani camp to undermine the prospects for talks was to target Britain’s new ambassador to Iran, Dominick Chilcott. Ahmadinejad and his foreign minister Ali Akbar Salehi had been pushing to get the British ambassador accredited. Larijani’s parliament, however, began a campaign a few weeks ago to expel Ambassador Chilcott, reduce diplomatic representation to the level of charge d’affaires and to pare down economic relations. The measure was approved by the parliament this past Sunday, but needed Ahmadinejad’s approval to take force.

Ahmadinejad and Salehi resisted, knowing very well that it would significantly diminish the prospects for a new round of talks. At that point, apparently, the hardliners around Larijani decided to unleash their mobs. Approximately 300 paramilitary Basijis staged a demonstration outside of the embassy and eventually broke into the premises, causing severe damage. All in front of the cameras of Iran’s state TV, aired live. The Basijis demanded that the parliament’s edict be implemented.

The divide is not necessarily over whether there should be talks with the P5+1 or not. Larijani’s maneuvering is more about weakening Ahmadinejad and strengthening his own future position in Iran than to oppose diplomacy per se. And Ahmadinejad desire for diplomacy is not due to new-won moderation.

In fact, not long ago, the tables were turned. When Larijani was Iran’s nuclear envoy and negotiated with the P5+1 over the nuclear issue, Ahmadinejad went to great lengths to sabotage his efforts. Often times, a few offensive statements by Ahmadinejad – whose talent for insulting and provoking Western audiences is well established – was enough to render progress in the talks impossible.

And it’s not only the West that has been the target of Ahmadinejad’s sharp tongue. In 2006, Ahmadinejad undermined Larijani’s efforts to make diplomatic headway in Moscow by telling reporters that Moscow must dismantle its nuclear weapons. A year later, Larijani resigned his post as nuclear envoy in frustration and began his plans to treat Ahmadinejad with his own medicine.

The attack on the British embassy was not only illegal and disgraceful, it was also a sign of how statecraft in Iran has deteriorated over the past years as a result of internal bickering within the political elite. Key actors within the regime are willing to take excessive risks on the international stage through reckless actions in order to score points in their petty domestic rivalries.

Increasingly, it seems as if there are no adults in the room when Tehran makes its decisions.

*[This article was originally published by Huffington Post on December 2, 2011]