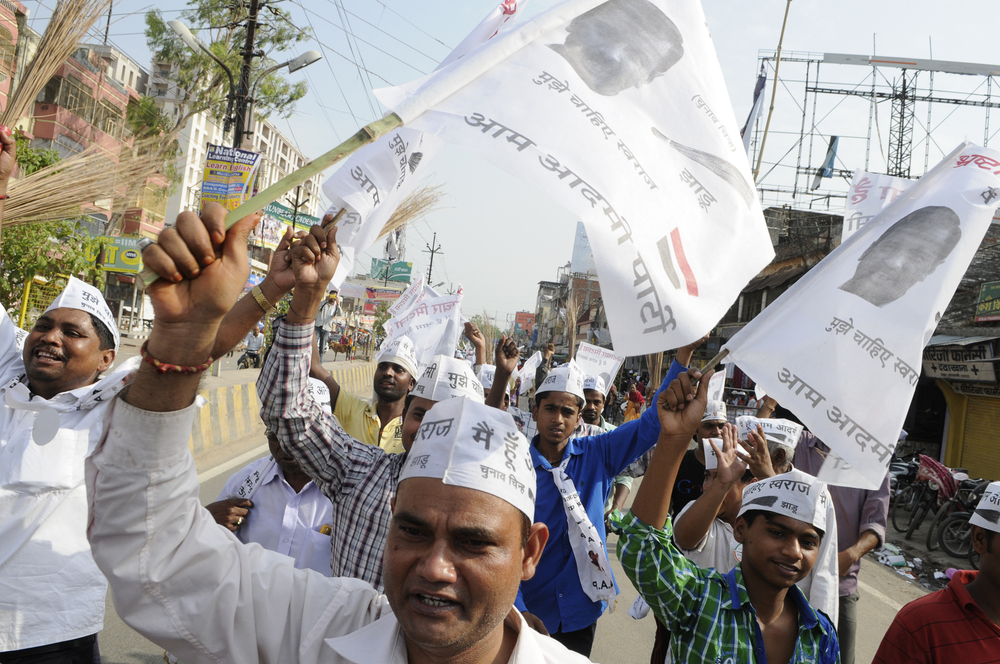 The AAP has attempted to make citizens more vigilant and to ensure that civil society plays a greater role.

The general elections have come and gone, and India has a new prime minister: Narendra Modi. He led the Bharatiya Janata Party (BJP) to a decisive victory at the polls. However, the future of other parties has come into question. In particular, some are writing off the Aam Aadmi Party (AAP). Yet the AAP is likely to survive this setback and continue to shape the political discourse in innovative ways. It has played a major role in encouraging Indian voters to become active participants in the political process and to make clearer choices.

End of the Dynasty

Today, politics has a new language in India. Indians are no longer subjects ruled by a dynasty. Both Arvind Kejriwal, the AAP’s combative leader, and Modi have risen from the grassroots. They made a conscious effort to transcend identity-based politics. While the BJP is seen as a Hindu nationalist party, Modi as a prime ministerial candidate focused on livelihood concerns and economic betterment instead of religious and caste-based identities. The elections reinstated the importance of leadership in shaping the language of politics in India. The way political parties are perceived by voters is shaped to a great extent by the role of leadership. The language of politics spoken by Modi shaped the electorate’s perception about him and the BJP.

The political landscape of India is going through a major transformation. Dynastic politics is being replaced by a more decentralized and bottom-up model of governance. The AAP has been more successful on this count, while the BJP still harbors some dynasties. The success of the AAP lies in reviving the democratization process that existed during India’s freedom movement. Even if the AAP does not survive, its ideas of a bottom-up democracy are here to stay.

A New Language of Politics

For the last few decades, Indian democracy has suffered political decay. Today, it is characterized by rampant corruption, increasing criminalization, weak institutional structures, complete subversion of the system from the top, a sycophantic political culture, increasing populism and a disconnect between power and responsibility. While Manmohan Singh was nominally the prime minister, the decisions were made by the party leader, Sonia Gandhi.

The AAP emerged as a reaction to this decay. It was an offshoot of the anticorruption movement, which started in January 2011. It focused on the development of democracy by making the government accountable to the people. It broadened public deliberation and sought to make the government respond to public concerns. Its ideas, such as anonymous reporting of officers demanding bribes, regular assessment of teachers’ performance and establishment of primaries to choose candidates, are needed steps in a top-down system.

Today, the AAP faces an existential crisis. While many are writing off the party, its chances of bouncing back will be determined by its ability to give a moral basis to politics.

The AAP has attempted to make citizens more vigilant and to ensure that civil society plays a greater role in the democratic process. The AAP has performed a useful function of empowering the common man. Its very name means the common man’s party and its focus is straightforward: The common man needs to be empowered irrespective of caste, class, religious or regional affiliations. The AAP has proposed a form of direct democracy on certain issues that is a radical new idea in the Indian system that has so far only used the representative democracy model. It has changed Indian politics forever by drilling into voters’ minds that democracy is not just about voting. This is particularly important in a country where democracy has long been limited to voting and where citizens ceased to play any role once a government acquired power.

Support Base of the AAP

The AAP emerged as an urban phenomenon. The urban middle-class and the poor are its main support base. In the future, the party might be able to appeal to rural voters as well, but as yet its organizational reach is limited to Delhi and a few other cities.

India has long had reverence for those in authority. Therefore, it has treated politicians as demigods. B.R. Ambedkar, the architect of India’s constitution, had warned against hero worship and expressed his disdain for India’s proclivity for reverence. The AAP has been chipping away at this hierarchical mindset by challenging India’s faltering institutions with a brazenness that can at times be breathtaking.

The AAP has roots in a social movement that wanted to rid corruption from Indian society. Some members of this movement joined the political arena to be active members in transforming government, instead of mere pressure groups agitating for an alternative model. However, politics brings its own compulsions and the AAP is struggling with its activist mindset and, often, seems trapped in its social movement mode. It also has to deal with the feasibility of direct democracy in a deeply divided country of 1.2 billion.

Corruption has gnawed away at India’s soul. In the recent past, those in power have become rapacious and voters have become cynical. The AAP emerged because voters desired a new kind of politics. They wanted representatives to behave with integrity and act in public interest. The AAP promised to make politics respectable, credible and accessible. This touched a chord with Delhi’s voters who elected them as the second largest party in the Delhi Assembly election. The AAP formed the government with outside support of the Indian National Congress.

Today, the AAP faces an existential crisis. While many are writing off the party, its chances of bouncing back will be determined by its ability to give a moral basis to politics. This is a radically new development in a political system that suffered not only from political decay, but also spiritual decadence.

The AAP, unlike most other parties, particularly the Congress, has accepted that it made mistakes. It has acknowledged that the party’s impatience to achieve quick results disconnected it from the voters. Yogendra Yadav, a prominent AAP leader, rightly points out that the current aim of the party is to ensure “there is room for alternative politics.”

The AAP never intended to form the government in the 2014 elections. However, it aims to provide an effective opposition because the Congress will fail to do so. The AAP has succeeded in attracting members from sections of society that were politically inactive. More importantly, it has also drawn people to its fold who were anti-political. This is a remarkable achievement in a country where citizens were lulled into passivity during six decades of de facto monarchy. This election marks the end of dynastic politics. It will be remembered for the deepening of democracy that has only just begun and will inevitably grow in the years to come.