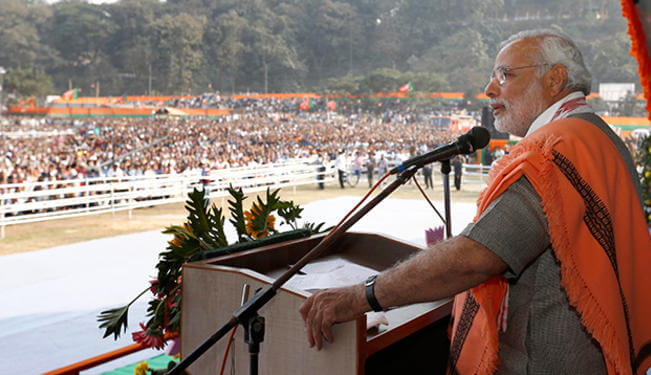 India’s Hindu Right is associated with the color saffron. The saffron flag, or bhagwa dhwaj, adorns the offices of the Rashtriya Swayamsevak Sangh (RSS or Sangh for short), which is at the core of the Hindu nationalist movement. The Sangh stands for an India of “one nation, one culture, one people.” Under this philosophy, the Muslims and Christians of multi-religious, multi-cultural India must either depart the country’s shores, or live as second-class citizens under Hindu supremacy.

Now, India is a large country. Its billion-plus citizens harbor all manner of beliefs. Under normal circumstances, the extreme positions of the RSS would be as unremarkable as those of fringe Muslim or Christian organizations that vociferously oppose homosexuality, or women working outside the home.

However, today, the RSS finds itself in the spotlight. Narendra Modi, the man projected as India’s future prime minister by opinion polls and analysts, learned the political ropes as an RSS pracharak or preacher-organizer.

As campaigning for the national elections reaches fever pitch, everyone in politics-mad India has an opinion on Modi. As they say, you can love him, you can hate him, but you cannot ignore him.

For critics, Modi, the current chief minister of the western state of Gujarat, presided over one of India’s worst massacres of Muslims in 2002. But according to his supporters, 2002 is well in the past. The Modi of today stands for governance and development.

So are Modi Version 2002 and Modi Version 2014 any different? In 2002, few had heard of Narendrabhai, as he is popularly known. On the directives of the RSS, he had been deputed to Hindu nationalism’s political arm: the Bharatiya Janata Party (BJP, or Indian People’s Party).

In 2001, when that party suffered a crisis of leadership in Gujarat, the RSS catapulted Modi to the post of chief minister. Being a hierarchical, authoritarian organization, it did not see the irony of democratically elected BJP legislators and councilors being led by a man who had never fought a democratic election in his life.

One of Modi’s early tasks as chief minister was to condemn the death of 59 Hindu pilgrims, who he alleges were torched by a mob of Muslims at Godhra train station in February 2002. He then went on to condone the massacre of up to 2,000 Muslims that followed the Godhra incident. Cadres of the Hindu Right led from the front in this violence.

Ironically, Modi’s minister of Women and Child Welfare, Maya Kodnani, was convicted by the courts and jailed for leading the mob in one such attack. As for the chief minister, in an interview, he controversially cited Newton’s Third Law, indicating that every action has an equal and opposite reaction (kriya pratikriya ki chain chal rahi hai). By this logic, Muslims deserved to die, whether or not they had been involved in the train burning.

Undoubtedly, the period around 2002 is Modi’s saffron phase. A saffron outfit had put him in power and he needed to show his commitment to their pet causes. Sartorially, he was regularly seen wearing kurtas (a long shirt worn by Indian men) and turbans of that color, and was often photographed with Hindu preachers, godmen and Hindu nationalist leaders, who wear saffron as a form of identity.

But people do move on. By the time of his second term as Gujarat chief minister in 2007, Modi was keen to be known as a vikas purush, a man of development. His reputation was sealed in 2008 when Tata Motors, India’s largest automobile manufacturer, moved its Nano car factory from West Bengal to Gujarat, rejecting the bids of several other competing states in the process. Under Modi, the government of Gujarat provided the Tatas with land and other infrastructure almost overnight, making the company’s chairman declare publicly: “It is stupid if you are not in Gujarat.”

Today, on the gleaming highways of Gujarat, billboards claiming that Modi’s state is the “Number One” in India are common. Modi touts himself as the number one chief minister, the leader of a state where investors can, in quotes, “sow a rupee and reap a dollar.” This, then, is green Gujarat, not in its friendliness toward the environment, but in its welcoming of private investment, Indian and foreign.

On the way from saffron to green, Modi has also tried to fly the white flag of neutrality and peace. In 2012, he undertook a Sadbhavna mission, where he fasted for inter-religious harmony, dressed, significantly, in white.

Ten years after the 2002 violence, Modi had trained his sights on national politics. Getting rid of the stigma of 2002 was key to his national ascent. As the would-be Prime Minister Modi campaigns today, one never hears an anti-Muslim or anti-Christian utterance from him. Gone is the man who used to rail against Christian missionaries and western NGOs, with their apparently undue influence on poor Hindus. Instead, a more dignified, statesman-like Modi spouts the mantras of su-raj or good governance.

So what is good governance according to Modi? If he does get a term as PM, will his leadership be characterized by good and fair administration, as opposed to partisanship? While we cannot look into the future, we can examine Modi’s recent record of governance to see whether it is saffron, white or green.

If we go by the book, good governance implies public administration that is democratic, accountable to citizens, participatory or consensual in decision-making, transparent, and decentralized.

In Modi’s Gujarat, however, democracy has been upended in the chief minister’s Samras Gram Scheme. Under this, villages that elect their councils unanimously — without an electoral contest — are given government incentives. Samras literally means of one color. There is little doubt about the composition of this color in Gujarat, where 90% of the population is Hindu. In fact, the scheme’s web page on the Gujarat government website states that it is a tribute to Arya, that is, Hindu culture.

Transparency and accountability are hardly Modi’s forte. The much-publicized Nano car coup, for instance, was conducted in secrecy. Even the main opposition party failed to get details of the deal that had been struck with Tata Motors to set up their factory in Gujarat. Rumors of huge tax concessions, highly subsidized land, and pollution control waivers are still doing the rounds.

Modi’s record in decentralized governance also fails to impress. While a leader is supposed to guide by example, Modi is actually the epitome of centralizing power around himself. Despite his busy schedule on the national campaign trail, he is currently in charge of ten ministries in Gujarat, including the crucial ones of Home or Internal Affairs and Industry. His politics appears no different. In Gujarat, he has no second-in-command, and his current and former Cabinet colleagues have gone on record to call him “authoritarian,” with some even likening him to Adolf Hitler. Given this past performance, it is characteristic that the build-up to the national election centers on Modi. Voters have no idea who will be in his ministerial team, and what their views are likely to be.

As the media hype around Modi builds, officials and politicians who have worked with him in Gujarat over the past decade look on. Ask them about their boss’ good governance credentials and one of them says: “Modi was trained in an RSS shakha, and he runs government as if it were one.” A shakha is a branch of the Hindu nationalist organization where men practice calisthenics to build their bodies for the protection of the Hindu nation. Each shakha is led by a pracharak, who brooks absolutely no dissent.

Modi is eager to have his political palette identified with white for peace, and green for economic development. But, at heart, he remains Hindu nationalism’s poster boy. This leopard is not likely to change his saffron spots.

*[This article was originally published by openDemocracy.]