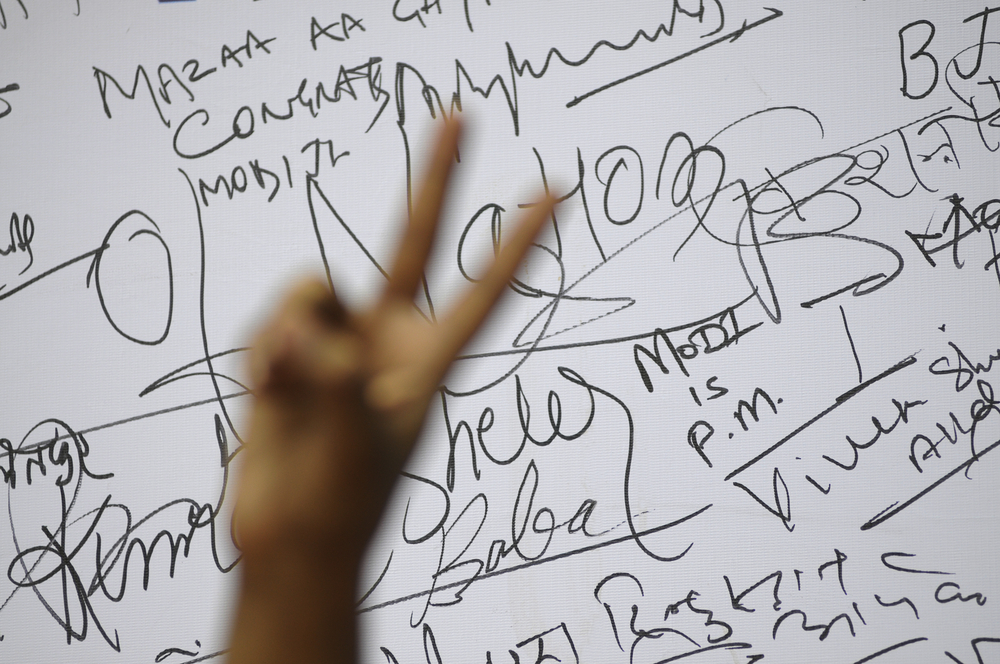 The Narendra Modi-led Bharatiya Janata Party (BJP) achieved a thumping victory over India’s Congress party, led by the Nehru-Gandhi family. Election results indicate that most Indians see Modi as a symbol of hope — a decisive leader and an efficient administrator.

In his acceptance speech, Modi acknowledged that the mandate was for better governance — “sabka saath, sabka vikas” (participation of all, development for all).

Nonetheless, many prominent international media reports introduce him as a right-wing hardliner — a poster boy of Hindutva (right-wing Hindu politics). If one goes by the reports in The New York Times, The Guardian or The Economist, several critical questions arise: Has Indian society lost so much religious tolerance that it has elected a Hindutva hardliner, who has been allegedly linked to communal riots in Gujarat, as prime minister? Why were India’s socialists and secularists unable to stop this political shift?

The short answer: For more than a decade, the anti-Modi campaign from the political left has fueled Modi’s rise. Modi thrives when he is criticized.

Modi was the chief minister of Gujarat during the 2002 riots in which two-thirds of the victims were Muslims. Obviously, a violent episode of this kind would elicit condemnation from any civilized society. Genuine critical opinions may vary from negligence to mishandling at various administrative levels in maintaining law and order during riots.

However, the opposition, led by the Congress party, Delhi-based national media and numerous minority rights NGOs, presumed Modi’s culpability of rioting within days. Extreme right-wing groups (such as Vishwa Hindu Parishad and Bajarang Dal), whose many members were later convicted of rioting, were off the radar and Modi was made the sole target in media trials. Extreme criticism was prevalent across mainstream media houses as Modi was frequently labeled an “Anti-Muslim,” a “Hindu Fascist” and as “Hitler.”

Since 2002, almost every media story on the Modi state government had a line suggesting his riot links. International media followed the same ritual. This trend continues to date in sections of media, though to a lesser extent.

Nonstop bashing in national media without any proven charges in the court of law opened up doors for Modi’s rise — first in Gujarat, and then beyond. Within religiously polarized Gujarat, Modi succeeded in convincing his Hindu voters that criticisms of him were propaganda by those with vested interests.

The anti-Modi camp is shrinking and there is no justification provided for the presentation of a one-sided picture and selective facts for so long.

Gujarati Congress leaders grasped this voter conditioning after their loss in the 2002 state elections. Though Modi has primarily won all successive elections on the developmental agenda, his political opponents in Gujarat have been extra cautious and have restrained from hyper personal criticism, especially on communal issues. In fact, when Tehalka Magazine released tapes of the Gujarat riots sting operation just a few days before the 2007 state elections, many of the Congress party’s leaders accused it of having conducted the sting at Modi’s behest.

However, the Congress leaders in Delhi did not understand the social context in Gujarat. Sonia Gandhi’s famous labeling of Modi as a “merchant of death” resulted in further polarization of votes on the religious lines — Congress eventually lost miserably.

Outside of Gujarat, the sustained one-dimensional depiction of Modi as a Hindu fascist in Indian and international media had nearly convinced most people. However, this strategy backfired and Modi’s stature rose in mainly three phases.

Stories of Modi’s efficient governance started resurfacing within a year of him resuming office and he was named the second best chief minister in India Today magazine’s national survey in 2003. Modi’s proactive measures in power and infrastructure sectors, global investor summits, and initiatives to create a business-friendly environment grabbed headlines. By 2011, he was named the best chief minister for the seventh time in India Today polls.

This counter-narrative made people more curious to explore the real Narendra Modi — a symbol of communal hatred or an efficient administrator.

With the spread of the Internet and social networking, Modi found a medium to connect directly and satiate people’s curiosity. Modi has enormous presence on the Internet. Unlike his opponents, he has the oratorical skills to connect with intellectuals as well as the masses, while his speeches are shared on his YouTube channel.

A significant section of Indian people, especially youth, consist of those who do not identify with the camp of religious hardliners and who cannot tolerate bad governance, inefficiency and corruption. Modi had grasped this voter characteristic long ago. For the past several years, he has been trying hard to reach out. He talks about governance, the economy, technology, environment and developmental issues. It is possible that many of those who had presumed Modi to be a demon saw his human side and bought in to his development-centric politics, which is very rare in India. Modi has yet to find a political opponent who can present a counter-narrative to his developmental vision for India.

Acquitted by the Court of Law

In 2013, the Ahmedabad Metropolitan Magistrate gave a clean chit to Modi based on a report submitted by the independent inquiry supervised by the Supreme Court. The inquiry did not find prosecutable evidence against him. This development may not have affected the opinion of Modi’s supporters or his critics. However, a large number of potentially neutral voters now had no concrete rationale for blaming the riots on Modi.

Today, the pro-Modi camp is immense. It covers not only Hindu hardliners, but also liberals who buy in to Modi’s claims of administrative acumen. Modi has a huge following among the youth, possibly across religious lines. So far, he has maintained a fine balance in keeping his right-wing followers and young, liberal fans under the same umbrella.

However, this balancing-act may become more difficult if the hardliners push their agenda publicly once Modi takes charge. Educated youth may find it difficult to sit in the same camp with religious hardliners, who tend to impose their worldview on others. In sum, the fault lines within the pro-Modi camp is the only threat that can shatter Modi’s wide popularity.

Now that Modi will be the next Indian prime minister, most of the anti-Modi liberals and leftists are crying foul. One wonders what they were doing when their colleagues were presenting anti-Modi propaganda in the media for more than a decade. Did they not anticipate what the consequences would be if their story could not stand the test of time?

The anti-Modi camp is shrinking and there is no justification provided for the presentation of a one-sided picture and selective facts for so long. Religious bigotry and rioting is a social malice across India. Why has there been a sustained campaign against only one politician? Unfortunately, some of the media houses and senior reporters have shamelessly changed sides to orient themselves with the winds of change.

In all this, genuine critics of Modi’s politics and governance have emerged as the biggest losers. Any criticism of Modi or his administration is labeled as a Congress ploy by the rapidly expanding pro-Modi camp. The political discourse breaks down right away as there is a predetermined position and no openness to consider the counter-narrative.

Perhaps the complete truth of the Godhra incident and the ensuing riots will never come out. But we can hope that liberals and leftists in India will learn a lesson by sticking to the facts. They should not forget their own contribution to Modi’s rise.