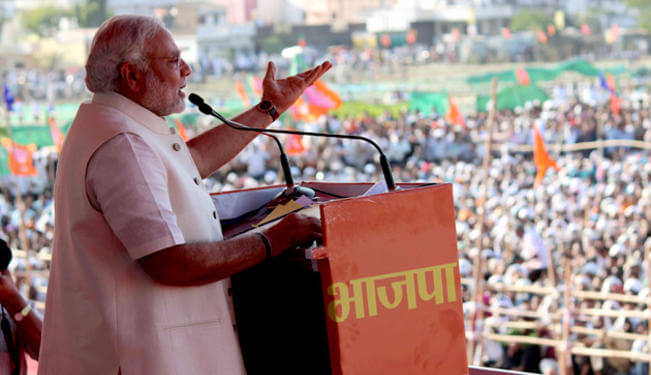 Modi, with his modest roots and focus on the economy, promises to usher in a new era for India.

The Congress party has ruled India for the bulk of the period since independence. For the last decade, it has been in power in the form of the United Progressive Alliance (UPA), a coalition it forged with like-minded parties.

Today, Congress faces a challenge from a reenergized Bharatiya Janata Party (BJP) led by Narendra Modi. The Indian elections are historic. After decades of venal corruption, nauseating nepotism and staggering incompetence, the Nehru dynasty might finally be ousted from office.

The UPA took over from the BJP-led National Democratic Alliance (NDA) in 2004 with India's gross domestic product (GDP) growing at a robust 7.9%. The Atal Bihari Vajpayee-led NDA had initiated reforms in infrastructure and other key sectors. Manmohan Singh became prime minister and there were hopes that high economic growth would continue because he gets credit for the 1991 reforms. Instead of further reforms, the UPA announced one populist scheme after another, creating a crypto-socialist economy for the 21st century.

Under the UPA, patronage has increased to unprecedented levels. Even The Economist, the 1843 English publication which opposed India's independence for 104 years and that has long favored the Congress party, estimates that $4 billion to $12 billion were taken as bribes by the UPA. This does not account for the loss to the Indian exchequer, of which the bribes are a mere fraction. The Indian GDP grew at a measly 4.7%, while inflation averaged over 10% during the last quarter of 2013. This means real GDP growth was in the negative. Unsurprisingly, unemployment is rife in India. Thanks to the UPA, the Indian economy is in a mess.

India's security is also in disarray. The country's defense forces are short on equipment, lack officers to the tune of 12,000 to 15,000, and suffer poor morale. Off the record, India's intelligence services bemoan the fact that there has been no prime minister as disinterested in their work as Singh. Foreign policy has been a mess and there is a singular lack of vision about India's role in the world. Chinese incursions into Indian territory have been ignored and India has not stepped up to the plate in Afghanistan.

The Prince vs. The Tea-seller

There have always been two Indias. Anglicized elites, who largely inherit power, believe themselves to be superior to the hoi-polloi. The middle-classes and the masses, who speak the vernacular, struggle for basic necessities. This election is a battle between the patricians who want to cling on to power and the plebeians who want change. The choice is between two candidates who are like chalk and cheese. As The Economist writes: "Mr Gandhi would ascend to office as if by divine right. Mr Modi is a former teaseller propelled to the top by sheer ability."

Rahul Gandhi is the great grandson of Nehru, India's first prime minister. He has never held any executive position. As a legislator, he has not proposed a single piece of legislation over the last decade. In a staggering demonstration of arrogance, he has appeared in just one extended interview so far. This was universally agreed to be an unmitigated disaster, raising questions not only about his experience and competence, but also about his ability and intelligence.

Modi comes from a backward caste. As mentioned earlier, he has humble origins. He is serving his fourth term as chief minister of Gujarat and has an impressive record in office. Three of his achievements are particularly impressive.

First, in a country with decrepit infrastructure, Modi has grasped the fundamental importance of focusing on power, irrigation, roads and ports for the Indian economy.

Modi appointed Manjula Subramaniam, a remarkable woman, to reform Gujarat's power sector. At that time, the Gujarat State Electricity Board (GSEB) was racking up massive losses and the state had a power deficit. Subramaniam improved morale, restructured debt to secure lower interest rates, renegotiated contracts with power plants to get cheaper prices, and plugged leakages in distribution. Distribution to rural areas improved dramatically with the launch of a scheme named Jyotigram, which means lighted villages. Now, the 18,000 villages of Gujarat have access to uninterrupted supply.

Most importantly, Modi took Subramaniam's advice and broke up GSEB. In 2003, the Gujarat government created a holding company, a power generation company, a power transmission company and four distribution companies. As of 2012, Gujarat "has a surplus of 2,114 MW and a vibrant energy sector."

Modi's irrigation reforms were no less path breaking. Around 70% of Gujarat is arid and semi-arid. His administration undertook a two pronged approach. Provision of water through dams, check dams, and the interlinking of rivers increased dramatically. Conservation of water through use of drip irrigation and other improved technology have meant that an additional 1.5 million hectares are now farmland. Agricultural growth in Gujarat has been 10.97% in the first decade of this century, in contrast to measly national rates of less than 3% for the same period.

When Modi came to power, Gujarat's roads were in dire state. The World Bank notes that the Gujarat State Highways Project "improved 1,900 kilometers of roads, reducing travel times by 10 percent." Numerous studies have noted that safety, employment and access to both education and health care have improved in Gujarat thanks to better roads. Ports have come up in Gujarat as well and a 2009 report notes the state has "the distinction of handling the maximum non-major cargo traffic in India."

Modi's policies have led to Chinese style double-digit growth rates for Gujarat. He has slashed red tape, introduced flexible labor laws, and successfully wooed investment. Such is Gujarat's allure that Ratan Tata, the former TATA boss, India's most respected industrial house, remarked: "You are stupid if you are not in Gujarat."

Gujarat accounts for 17.2% of India's fixed capital investment, 15.6% of the value of production, 20% of industrial output, and 22% of the country's exports. It is little wonder that Indians from other states are immigrating to Gujarat for employment.

Indians are sick of living in darkness, potholed roads, chronic unemployment and bureaucratic oppression. Modi offers a glimmer of hope to millions of Indians who yearn for better governance, improved infrastructure and a fair shot at life.

As expected, Modi has many powerful enemies. The din of allegations against him is sometimes deafening. India's so-called secular leaders have long pandered to clerics for the Muslim vote. These secular leaders allege that Modi abetted the 2002 Gujarat riots, while staying silent about the 1984 pogrom of Sikhs that was led by the Congress. It is important to note that the courts have given Modi a clean chit.

Furthermore, the number of Muslims below poverty line fell from 31% in 2004-05 to 7% in 2011-12 in rural Gujarat. The same number for urban Gujarat fell from 42% to 14.6%. Muslims have fared far worse in the states run by the Congress and other so-called secular parties.

Arvind Kejriwal is Modi's latest left-wing critic. He was in power for 49 days in Delhi where he overthrew a notoriously corrupt Congress government. Kejriwal made his name opposing the Congress but has now trained his sights on Modi. He is a Chavez-style populist who promises freebies such as cheap electricity and free water to the people. He also promises to curb corruption by creating an elaborate new bureaucracy. He opposes Modi's economic model and is trying to occupy the space left vacant by the Congress.

Other socialists and communists have a Pavlovian opposition to enterprise and a fixation with government intervention. Modi is offering an alternative to the Nehruvian state and that is upsetting those in a country, which Nehru's daughter deemed socialist in 1976 after a constitutional amendment of dubious validity.

Foreign correspondents in India and its anglicized elite socialize over scotch in expensive locales in cities like Delhi and Mumbai. Many of these still harbor imperial attitudes and disdain people with rural and vernacular roots. The rough-hewn cadences of Modi jar with their snobbish sensibilities. They are giving the Congress a clean chit for decades of misgovernance, while attacking Modi even on his incontestably impressive economic record. Clearly, the tea-seller is threatening India's incumbent elite to evoke such a vitriolic response.

In Search of a Leader

India has muddled through a decade of despair. In much of the north, there is no order, leave aside rule of law. Under the Congress, Delhi achieved the dubious distinction of becoming the rape capital of the world. Sonia Gandhi has been de facto prime minister, wielding power without responsibility and reducing the constitutional position of the prime minister to a joke. India is looking for someone to lead and Modi is, by far, the best option in a generation and more.