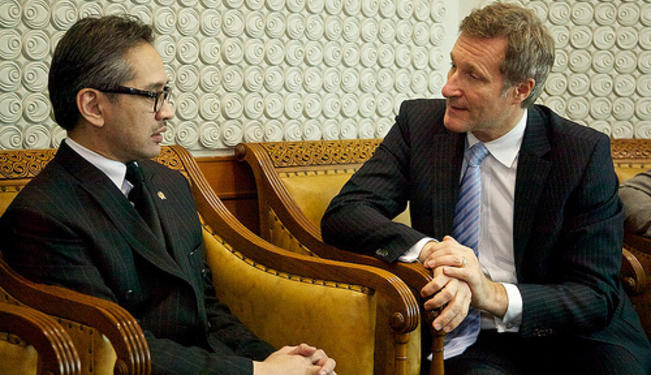 Why does Indonesia want to develop its relations with Myanmar?

In a special feature published in The Myanmar Times in 2009, the Indonesian ambassador to Myanmar, Sebastianus Sumarsono, hailed the “60 years of struggle and bilateral friendship” that have bound the nations of Indonesia and Myanmar together. In the feature, he accentuates the support that both countries have mutually given each other during these decades, and underlines the “shared cultural heritage”, the “closeness of culture”, and their historical similarities. The ambassador touches only lightly upon their existing political differences, which he describes as “unavoidable” in a world where different nations have to follow different interests. It is only natural that in a feature specially dedicated to honor six decades of bilateral relations, the ambassador cannot dwell too long on the two nations’ issues of difference. However, it is the differences rather than similarities between the two countries, that are interesting and worthy of note.

Indonesia, Myanmar and the Issue of Democracy

Ever since its independence from the Dutch, Indonesia, south-east Asia’s most populous and largest country in terms of area, has viewed itself as one of the most important political actors in the region. This self-image was shaken severely by the events of the Asian financial crisis of 1997/8 when Indonesia’s budgetary sovereignty was taken over by foreign actors such as the International Monetary Fund (IMF). One major consequence was the beginning of the Reformasi process, during which President Suharto’s authoritarian regime was toppled after more than three decades in power. The following years saw steady economic growth and the rise of Indonesian democracy that Freedom House called “fully free”. Today, there is lively ongoing discourse about how far this statement can be called valid. However, on the international stage, the Indonesia of the 21st century sees itself and is predominantly perceived by others as a good example of a country that has managed a good transition from dictatorship to democracy. As the American Secretary of State, Hillary Clinton, expressed during her visit to Indonesia in 2009: “If you want to know if Islam, democracy, modernity, and women’s rights can coexist, go to Indonesia”.

It is here that the potentially contentious issues in the Indonesia-Myanmar relationship need to be identified, as the government in Naypitaw (Myanmar) is still classified as a non-civilian military one and therefore as authoritarian. Indonesia explicitly supported and welcomed Myanmar’s membership to the Association of Southeast Asian Nations (ASEAN) in 1997. It has since been playing the role of a regional supervisor of democracy by constantly encouraging Naypitaw to reform its authoritarian system. Little is officially known about how the Myanmar government reacts to this Indonesian stance. Given its reactions to similar (but harsher) Western criticism of its junta, we can safely assume that at least internally, Myanmar has a rather negative reaction to Indonesia’s promptings.

Nevertheless, it is significant to mention that Indonesia does also not tire of rhetorically protecting the Myanmar regime. Whenever a member of ASEAN or a Western state puts pressure on Myanmar (e.g. concerning human rights), the Indonesian government’s statement almost always includes a request for democratic transition, while asking the international community for patience. This can be seen by a statement made by the Indonesian Foreign Minister: “We want Myanmar to fulfill its commitment to hold independent, transparent, democratic and inclusive elections (…)”. Nonetheless, one should not expect perfect conditions in Myanmar instantly, as “(…) otherwise we will even not be able to see development”. Thus, the official Indonesian standpoint toward Myanmar could be called that of a benevolent older brother who knows what is best for the less experienced sibling, but also acknowledges that it takes time to change and hence plays the role of a mediator.

As Ambassador Sumarsono mentions in his feature, the bilateral relations between both countries go back to the 1940s. Nonetheless, the much hailed “exchange of visits by the leaders of both countries” only intensified around the turn of the millennia, coinciding with a global re-awakening of interest in Myanmar and the opposition figurehead Aung San Suu Kyi. The last five years saw a special increase in bilateral cooperation, as symbolized by the Joint Commission for Bilateral Cooperation (JCBC). The most significant meeting took place in December 2011 when Indonesia’s Foreign Minister Marty Natalegawa met with his Myanmarese counterpart U Wunna Maung Lwin and Aung San Suu Kyi, four months prior to the 2012 parliamentary by-elections. He expressed that Indonesia would like “to continue working closely with Myanmar in promoting democratization and government reforms (…)”. When Aung San Suu Kyi’s NLD (National League for Democracy) won 43 out of 45 possible seats, Indonesia congratulated Myanmar on the fair elections and the undergoing democratic transition.

Indonesia’s Stance Towards Myanmar
Why does Indonesia now seek closer ties to Myanmar? Regarding the two countries’ basic characteristics one could think that they are quite similar. Both became independent during the second wave of decolonization in the 1940s and both have highly diverse and heterogeneous populations. Nonetheless, one finds more differences than similarities: Indonesia has more than four times Myanmar’s population. While the latter has been experiencing many warlike situations (the latest being the violent riots and protests in 2008), the former was able to establish quite a peaceful democracy. While Indonesia ranks among the medium developed countries on the Human Development Index, Myanmaris among the 52 least developed ones. The total value of trade between both reached $264mn in 2008 with an upward trend, which is nonetheless quite a small number compared to, for example, the value of trade between Indonesia and the Philippines that reached $2.8bn in the same year . The goods that Indonesia imports from Myanmar are mostly natural resources like fish and fruit, or commodities that are easily handmade such as wood products. On the other hand, Indonesia exports products like chemicals, vehicles, and steel materials to Myanmar, which naturally tips the trade balance in favor of the former.

Judging from the above data and from Indonesia’s recent rhetoric, the country’s reasons for seeking closer ties to Myanmar during the last fifteen years are multi-layered and manifold. As the figures show, Myanmar is not yet a significant trading partner for Indonesia and could easily be replaced. Thus, even though the internationally shared interest in Myanmar’s not yet fully opened market is an obvious factor, there must be more to it.

First, there seems to be a genuine interest in aiding a fellow south-east Asian country with a similar history. Nonetheless, as well-meant help is never the sole driver of a country’s foreign policy, Indonesia must have further interests. It is obvious that Indonesia, too, would benefit from a democratic Myanmar, as the process would certainly help stabilize a region that is facing persistent conflict in the South China Sea. Furthermore, prestige and influence are another concern. Not only is it significant that Myanmar will chair the ASEAN in 2014, but the fate of democracy in Myanmar will also determine the way democracy and the connected issue of human rights, fare in the region’s near future. This would be in accordance with Indonesia’s self-image as one of the most powerful countries in south-east Asia. Nonetheless, it must be borne in mind that the analyzed standpoint is only the country’s official position, as there naturally are civilian voices in Indonesia that criticize the government for not putting enough pressure on the Myanmar junta to democratize the country.

The Connection between Domestic and Foreign Issues

The Indonesian foreign policy tactic of gently pressuring Myanmar to democratize has been complimented on the international stage. As Australian Foreign Minister Kevin Rudd commented: “I congratulate Indonesia through ASEAN for its fine diplomacy on Burma. This has been good work by our friends in ASEAN, and good work, in particular, by Foreign Minister Natalegawa.”

Indonesia’s stance can be seen as a perfect example of the connection between domestic and foreign politics. Since the beginning of Reformasi, it has been a hallmark of Indonesian policies to internationally promote democracy while strengthening democracy at home.Thus, the reason Indonesia seeks closer ties with Myanmar can be found in its domestic, regional, and international considerations.