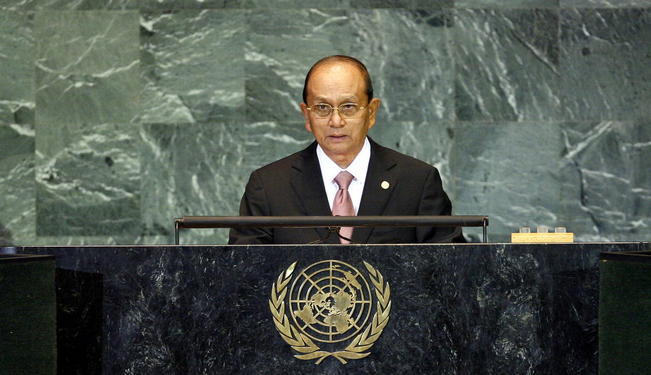 Reforms in Burma are only possible if the government acknowledges the military and business leadership’s corruption.

President Thein Sein of the Republic of the Union of Myanmar(Burma) delivered a speech on May 11, 2012 concerning his plan for national development in Burma. He claimed that the first stage of reform was already established, a visible change of foreign exchange rate unification was being made with assistance of international financial institutions such as the IMF, the World Bank and the Asia Development Bank (ADB). Burma began to reform its monetary system in April 2012 when the Central Bank created a managed floating rate for its national currency, the Kyat, in order to unify the multiple exchange rates.

In addition, a new foreign investment law was passed, which offers a straight five-year tax exemption with an extension of three years if certain measures are met. The law also specifies terms of using land, legal structures and incentives for foreign companies. It was enacted in order to gain Foreign Direct Investment (FDI), which had been limited due to previous international economic sanctions. These sanctions have by now been mostly suspended by international governments crediting Burma for successfully holding by-elections in April.

These two steps begin to address the difficulties of conducting business in Burma but major problems still exist. The country lacks an electronic banking system, up-to-date Internet connectivity, 24-hour electricity supply and intellectual property rights. It is crucial that both domestic and foreign companies are treated fairly under clearly defined intellectual property rights. Without them, the prospects of the country's high-tech industry may disappear. The government needs to create a level playing field for both domestic and foreign companies in all areas of the economy including manufacturing and services.

Currently, all economic transactions are controlled by the military, their cronies and drug-lords. The Burmese military set up two economic enterprises, the Union of Myanmar Economic Holding Limited (UMEHL) and the Myanmar Economic Corporation (MEC) in 1990 and 1993 respectively. Both privileged enterprises are still exploiting the country’s key economic sectors with no benefits flowing to the citizens of Burma.

The country’s important natural resources and heavy industries including import, export and service sectors are monopolized by the UMEHL, MEC and their allies. Military-managed business firms and crony enterprises are corrupt, precious natural resources have been exploited while the vast majority of citizens have been living in dire poverty for decades.

Despite much talk about needed economic reforms, President Thein Sein has never spoken of the corruption and unprofessional conduct of UMEHL and MEC. Without officially recognizing the well embedded corrupt practices in Burma, there can be no means to adequately address the issue. The country’s citizens are very poor not because the country has no resources, but because the country’s leaders, including the new semi-elected government, refuses to acknowledge the extent of corruption and wealth amassed by the military leaders and their cronies formed business associates.

Foreign Aid and Investment to Help

In his guidelines to the second stage of reforms, the President put across that rural and township administrators must be educated in order to avoid corruption, bribery and unfriendly relations with the public. If this reform succeeds to be carried out, it will be very useful in conducting the entire reform. Observers, however, think that it is unfeasible since the members of the President’s cabinet are former senior military officers tainted with corruption.

National development requires more capital, technology and human resources than the state’s funds yield. For this reason, President Thein Sein seeks financial aid from the international community and direct foreign investments. The Central Committee together with the Work Committee, state and regional governments will be responsible for successfully utilizing the international financial aid for poverty reduction and region- and sector-wise reforms.

The reform strategy also calls for more private sector involvement. Associations, companies, cooperative societies and foundations are the main forces engaged in the development of the socio-economic situation of the people. Since many nations and corporations have offered to provide assistance to and investment in Burma, the ministries and regional governments should draw up strategies for such sectors as agriculture, industry, education and health, where aid is desperately needed.

What Foreign Money will be Used for

The government plans for the ‘Rural Development’, ‘Poverty Alleviation’, ‘Public Education’, ‘Public Health’, ‘Socio-economic Wellbeing and Natural Disaster Prevention’ budgets to be disbursed through foreign grants, while most of the national income will keep going into the defense budget.

The government plans to create national progress through international financial assistance with no planning of national development via its export incomes. Crucially, the public sector has never benefitted from the country's natural gas export earnings, a whooping US$2.94bn in the first 11 months of the fiscal year 2011/2012, up from US$2.52bn in 2010/2011. It is vital that these natural gas export earnings are transferred to the budget and used for social and infrastructure development – especially in ethnic minority regions.

The Asian Development Bank is ready to offer Burma assistance, but financial aid can only resume when $490 million of loan is repaid. The government, ignoring the repayment of these old loans, seeks to take up new loans instead. This illustrates the difficulty of investing in Burma. There is no accountability or commitment to transparent, commercial transactions. It is not only morally wrong to evade debts from international financial institutions, but commercially risky for investors.

According to his speech, the President seeks the money immediately so as to undertake a series of reforms covering national unity, dominance of peace and stability, ensuring security of the people, enhancing the international cooperation and introduction of clean governance with the aim of a flourishing, multiparty democratic system.

Much still Needs to be Done

International development aid and foreign investment in Burma will not address the severe poverty of citizens in Burma, especially in the ethnic minority states and divisions who are barely surviving after decades of civil war. A large part of the population will remain desperately poor without a social safety net to help them survive further policy-induced economic shocks. There are no land rights for farmers who continue to be removed from their land as government, local and international businesses increase their commercial ventures.

The vast profits from extraction of natural gas and oil have gone directly into the pockets of a few generals and their families. The military still receives the major percent of the national budget, much larger than is spent for health, education, and welfare.

President Thein Sein’s speech clearly was to seek foreign grants and aids. In order to obtain these grants, the respective state and region chief ministers were supposed to take the leading role in making the process of related proposals by the end of May, only within a three week period after Thein Sein’s speech. This makes a mockery of a true development process by the citizens and for the benefit of the citizens. It is most likely that as international development aid and foreign investment flows into Burma, the same military affiliated businesses and crony associates will be the biggest benefactors, not the citizens who are barely visible to the government.