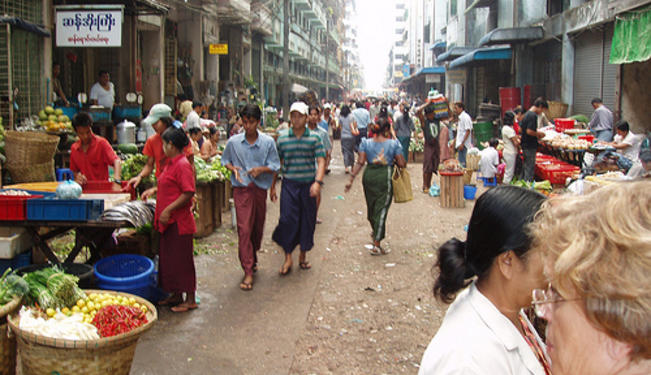 India stands to gain a lot from Myanmar walking away from China’s embrace and turning democratic. As the Indian Prime Minister is visiting Myanmar next month, there is a lot to reconsider in the two countries’ relationship.

Very few observers in India and indeed across the world could have predicted the sudden change of course by the ruling military junta in Myanmar and its new-found love for democracy. Now, of course, it seems that democracy is on an irreversible course in Myanmar, particularly after the recent by-elections, which clearly brought out the overwhelming support for Aung San Suu Kyi and her party, the National League for Democracy (NLD).

There has been a plethora of visits by important world leaders such as the US Secretary of State Hillary Clinton, the British Foreign Secretary William Hague and the Japanese Foreign Minister, Koichiro Genba, to Myanmar. Following suit soon will be the Indian Prime Minister Manmohan Singh, who the Indian media has reported will be visiting Myanmar next month and when that happens, it will not come a day too soon. It will also be the first Indian Prime Ministerial visit to Myanmar after a long gap of 25 years.

India stands to gain a lot from Myanmar walking away from China’s embrace and turning democratic. During US President Barack Obama’s visit to India in November 2010, he had chided the Indian establishment for “not doing enough” to promote democracy in Myanmar. However, India has had its own reasons for the manner of its dealing with Myanmar’s military junta. India had initially strongly supported the pro-democracy movement in Myanmar after the annulment of the 1990 election results by the junta, but as Myanmar inched closer to China, India decided to change tack.

It was the then Indian foreign minister Jaswant Singh's landmark visit to Myanmar in 2001 that helped to break the ice, though the then Indian Foreign Secretary J.N Dixit’s Yangon visit in March 1993 had helped to set the ball rolling. Jaswant Singh’s visit was the first made to Myanmar by an Indian Foreign Minister in 20 years. Since then, there has been a steady stream of high-level visits from both sides, including the visit last October by the Myanmarese President Thein Sein. As of 2010-11, the total bilateral trade stood at $1067.05mn.

Why is Myanmar crucial for India?

First, Myanmar is India’s land bridge to the ASEAN region and is hence critical for the success of its “Look-East Policy” which aims at re-establishing close ties with the countries of south-east and east Asia.

Second, Myanmar shares a long 1600-km land border with India’s Northeastern region, which has many active militant groups. Many of these groups in the past (and even now) have found shelter in Myanmar. Close ties will help India persuade Myanmar not to give shelter to anti-India elements.

Third, Myanmar is rich in oil and natural gas, which India’s booming economy desperately needs. India has been scouting across the world for oil and gas resources and Myanmar is India’s immediate neighbour, which will enable India to cut down transportation costs and the risks involved. The Iran-Pakistan-India pipeline (IPI) has been a non-starter because of factors like American opposition to the same and the worrisome security situation in Pakistan. Already, India’s state-owned ONGC (Oil and Natural Gas Corporation Limited)-Videsh and GAIL (Gas Authority of India Limited) have made significant investments in the oil and gas sector in Myanmar.

Fourth, it helps to reduce China’s growing strategic footprint in India’s neighbourhood. The Myanmarese junta had allegedly allowed China to set up a listening post at Coco Islands abutting India’s Andaman and Nicobar chain of islands. Recently, India had to vote against Sri Lanka at a recent session of the United Nations Human Rights Council in Geneva on a resolution for 'promoting reconciliation and accountability' in Sri Lanka because of domestic political compulsions, whereas China, Pakistan and Bangladesh supported Sri Lanka.

Fifth, Myanmar is crucial for India’s land connectivity with the rest of the south-east Asian region. India has already built the India-Myanmar Friendship Road, between Tamu and Kalemayo in Myanmar and running onward to Kalewa, which will help India get land-connectivity to the other south-east Asian countries.

Meanwhile, Myanmar also has a lot to gain from better and close ties with India.

India, as the world’s biggest democracy, can do a few things for Myanmar that China, despite its economic and strategic influence, cannot. India with its democratic credentials and close relations with the US and other Western and Asian powers can help Myanmar get full international acceptability, while gently prodding it to keep its tryst with democracy.

India is already involved in a host of infrastructure and energy projects in Myanmar. Besides, it has provided 32 Myanmarese cities with high speed data link while Indian firms are involved in the development of Myanmar’s railway network, including the supply of railway coaches and locos. India has set a target of June 2013 to complete the $120mn Sittwe deep-water port in Myanmar. This will be a game-changer for India’s landlocked north-east as once the project is completed, vessels would be able to ply between the Indian state of Mizoram and the Sittwe port.

How can India help Myanmar as it takes baby-steps towards democracy?
First, India should announce additional lines of credit to Myanmar, taking into consideration the areas that need immediate attention. During Thein Sein’s state visit to India in October 2011, India announced the extension of a $500mn Line of Credit to Myanmar. This is in addition to the Lines of Credit of close to $300mn that had been extended by India to Myanmar in the past. In fact, Myanmar is as important for India’s national security as Afghanistan is. India has given massive amounts of aid to Afghanistan; it should be prepared to do likewise in Myanmar.

Second, India should provide additional technical assistance and manpower, especially in the field of IT, India’s key strength. Already, an India-Myanmar Centre for Enhancement of IT Skills (IMCEITS) is in operation in Myanmar.

Fourth, India would do well to relax visa regimes for Myanmarese nationals (particularly those visiting India for religious purposes) and announce special scholarships for Myanmarese students to come and study at Indian institutions.

The entry of the private sector will also help to speed up the implementation of certain key projects.

Lastly, India should take the initiative to start bus services between Myanmar and some cities in north-east India, taking a cue from the Delhi-Lahore and Kolkata-Dhaka bus services, while strictly ensuring that illegal weapons and narcotics do not find their way to India.

In some other areas, India will have to move cautiously. While India and Myanmar have agreed to cooperate in the implementation of the Tamanthi and Shwezaye power projects on the Chindwin river basin in Myanmar, India should learn from China’s mistake and avoid going ahead with the same. In September last year, the Myanmarese junta had suspended the construction of the Chinese-built $3.6bn Myitsone hydroelectricity project on the Irrawaddy river, which would have mostly supplied electricity to China. There was a massive public outcry against the project, which forced the Myanmarese government to retract. India would do well to not make similar mistakes.

India’s policy towards its neighbours has rarely been successful. Myanmar gives India a golden chance to start afresh and upend its neighbourhood policy. Myanmar will be a crucial test for India, and hence some out-of-the-box thinking is called for.

*[This article was originally published by the Russia & India Report on April 23, 2012.]