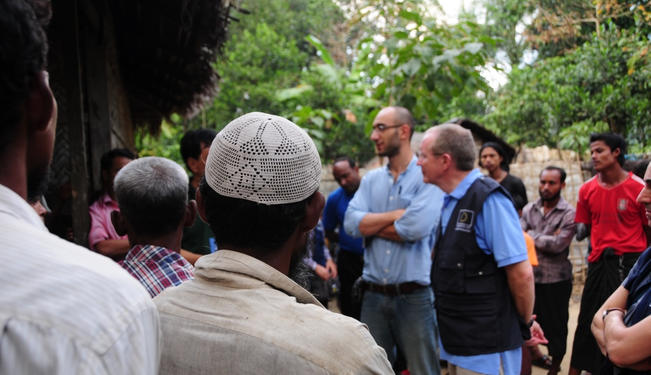 Why is Myanmar silent over the plight of Rohingyas?

A United Nations (UN) statement in January demanding an impartial probe into the killings of Muslims by Buddhists in Myanmar, has once again brought the issue of Rohingyas — widely accepted as the most persecuted minority group — to the fore. The alarming frequency with which reports have been emerging over the past several months, detailing an unmistakable campaign of suppression of the community, is highly worrying.

The clergy, known for their nonviolent values, have taken to violence in an attempt to rid the state of Rakhine of Rohingya Muslims. Why have the clergy in Myanmar opted for violent means? And why is the government in Naypyidaw silent on the matter?

The friction between Rakhine Buddhists and Rohingyas began as a mild form of xenophobia in 1824. It has now evolved into a full-blown violent campaign of driving out the "settlers," who have now lived in the region for generations.

Although, superficially, the situation appears to be similar to several other ethnic conflicts, the Rohingya issue stands due to the active participation of the Buddhist clergy.

The primary force driving this pogrom is the rising Islamophobia among the clergy and masses in Myanmar. The paranoia among Rakhine Buddhists of a potential Islamization of the country — as with Indonesia and Malaysia in the 12th and 15th centuries, respectively — is deeply-entrenched.

While the core essence of Buddhism lies in its principles of nonviolence, inclusiveness and flexibility, the applied measures of these principles vary from one school of thought to another. Despite Mahayana Buddhism (as practiced in Tibet and Mongolia) being more flexible and inclusive, Theravada Buddhism (as practiced in Myanmar and Sri Lanka) is rigid in its structures. Furthermore, the attrition rate in schools of Theravada Buddhism is high, with very few schools in practice in today’s world, as compared to other models of Buddhism.

This forms the basis of thought in Myanmar that their culture is under threat. Also, a threat from an "outsider" is often perceived as more immediate and of greater priority to thwart, as opposed to a threat from an "insider" (in this case, the "insider" is the attrition rate).

However, this does not translate into the notion that some forms of Buddhism accept violence.

What Role for the Clergy?

Adding to the complexity of the issue is the role of the clergy in Myanmar's politics. A large section of Burmese society comprises of monks, as many enlisted in monasteries to escape poverty and/or orphanhood during the junta years. The Saffron Revolution of 2007 saw a surge in numbers of those enrolled in monkhood.

Having played a role in somewhat filling a void in the absence of a benevolent and accountable government, the Buddhist clergy holds a moral high ground in Burmese society, while they are also seen as a powerful force.

When tens of thousands of monks are taught nonviolent means but are, at the same time, systematically made paranoid of losing their faith due to an onslaught of a completely different culture, eventually, regardless of the nonviolent teachings, they prepare themselves to fight off the "enemy."

Such a "nonviolent radicalization" among the clergy in Myanmar has affected the shaping of a generation that is willing to inflict violence as offence, as opposed to in-defense that Buddhism essentially prescribes.

This does not automatically mean that all Buddhists are violent; but the recognition that Buddhist monks or not, they are human beings too, and they have the same emotions as the rest.

Once this view is recognized, it does not take long to understand the basic problem in Rakhine: there exists an ethno-religious conflict, and the side that currently has the upper-hand is trying its best to weed out from its roots what it sees as a problem.

Why Does Naypyidaw Not Intervene?

Myanmar's government has its own apprehensions over the Rohingya issue. On the social front, assimilating these people into the country would mean earning the wrath of the clergy — which enjoys considerable clout with the masses — who believe their culture is under external threat.

The economic costs of including hundreds of thousands of impoverished people into its citizenry would be substantially high. Faced with the daunting task of simultaneously improving the economy, democratic structures, public services and so, and tackling armed cessation struggles, the state's resource basket is heavily strained.

For Naypyidaw, as long as the large Rohingya population is deemed as illegal immigrants, the government technically is not responsible for providing for them.

Unfortunately, what seems to be unfolding in Myanmar is a plausible Faustian pact between the clergy and the political class — a deadly quid pro quo agreement that will only lead to worse days ahead.

What is more dangerous of the two, however, is the nonviolent radicalization aspect of this issue — an emerging but noticeable trend in Asian ethnic conflicts.

*[This article was originally published by the Institute of Peace and Conflict Studies, New Delhi. The article was updated on March 15, 2014.]