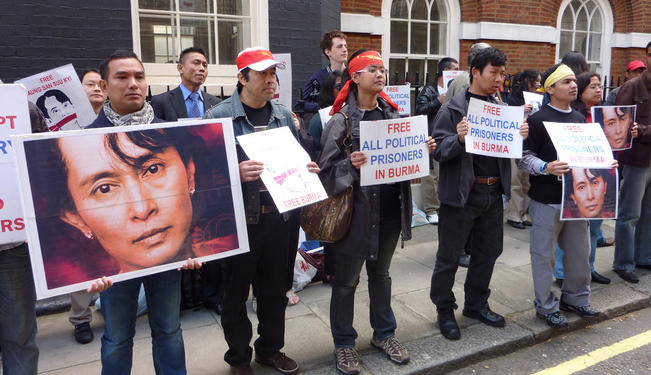 There is no doubt that Myanmar’s government has made great progress towards democracy. Looking back at its modern history, the Junta has tried to legitimize and give credibility to its government. However, Myanmar needs to fully commit itself to specific goals in order to truly become the democracy that it wants to be.

The Junta for decades has tried to demonstrate that only they can govern the vast ethnic group population, but they only got into power in 1958 because the democratic system failed. Indeed, U Nu, Burma’s Prime Minister, was inept at holding the civil tensions that erupted post-independence, especially from communist and ethnic parties. U Nu asked the General of the armed forces to take over the leadership of the country in a caretaker government. For two years, General Ne Win was in power. During this time he re-established stability and order, and respected his contract by handing over power in 1960.

The bloodless coup d’état in 1962 took place because the military thought that large ethnic groups that are sitting on natural resources were going to secede. They military therefore decided to take over the government and strengthen its centralized regime. The free elections of 1990 took place as a result of both internal and external pressure. The Junta allowed free elections because they believed they had a chance to win. After losing to the National League for Democracy however, they nevertheless held on to power.

Through legalizing a renewed win in the 2008 constitution and eliminating Aung San Suu Kyi from the list of potential candidates, the Junta won the 2010 elections. After being legitimately recognized as the sole authority of the country, the Junta started to open up, thus leading the country towards today’s fast transformation towards democracy.

The Junta indeed has learned from its past mistakes but there is still much to improve. Their failed economic policies led the country into a financial mayhem that is now for instance being tackled by the IMF, the US and the World Bank. There is little information about the extensiveness of the black market, nonetheless, it is certain that it has existed for decades and has established its own network between the legal and the illegal economy. It is difficult to get rid of the black economy since it has been entrenched in the society, and it is unclear what will happen to the illicit drug, mineral and wood trade.

Also, although there seems to be a great momentum for negotiation with the ethnic groups, it is still not certain how the government will include them into the system. It is unclear whether these groups will be content with just having a voice and if not, what the government will do about it. As the country is becoming more liberal, the division within the government might prove dangerous for the infrastructure, and surely there will be voices that disagree within the institutions.

There are three main challenges for the government in its transformation towards its own style of democracy: establishing a strong legal economy, generating ethnic reconciliation and creating infrastructure. In order to bring this development, peace and stability to the country, the government needs to manage internal disagreements.

Policy recommendations are only viable if there is a long-term goal. In the case of Myanmar, there is a wish to see the country grow and become a “normal state”: one that has an independent executive, legislative and judiciary branch. Myanmar can only succeed by establishing its own style of democracy. It can draw inspiration from other models, but should not copy them because it has unique historical and environmental traits.

Myanmar should have a resource based economy, the revenues of which go into Myanmar’s transformation towards democracy. Norway is a premier in utilizing its resources for the use of its country and Myanmar could be inspired from such a system.

Also, the issue of the large ethnic minorities inhabiting the country has to be addressed. There is a need to establish a semi-centralized government as a mix of the Singaporean and United States systems. It would be a state system with an emphasis on a strong federal government. The issues of economy, government and ethnic diversity are long-term matters that will necessitate constant management from the newly elected regime in order to avoid disorder and civil uprising.

In the mid-term, the country needs to assure the correct management of policies initiated in the short-term. Since the transition will be watched by the international community, it is essential that it maintains a positive international image. It needs to reward good behaviour and punish wrong doing publically in order to spur the belief of the legitimacy of the government as well as its image in the international realm.

Similarly, the government needs to cooperate with other countries, international organizations and NGOs on common issues such as drug trade, human security and environment in order to boost its internal and external support. It is expected that the military budget will gradually decrease in order to develop social infrastructure such as roads, power plants, schools and hospitals. After decades of trying to legitimize the government, it is now time for the former Junta regime to demonstrate their true motivation to establish democracy.

Myanmar is only at the beginning of its journey towards its own democratic system. To gain both the financial and political support of the international community, it needs to create credibility. The government should free all the remaining political prisoners, which in turn will gain further international support and show its intention to transform. Not all economic sanctions against Myanmar should be dropped, but the sanctioning countries should work with the Myanmar government to free certain areas such as agriculture and promote efficient economic use of revenues. The government should steadily open its political scene to freedom of speech. However there should be a limit, such as the demand for secession from the country.

Although the government is now in open discussion with the ethnic groups, it is important that both parties continue their good entente. The Gradual Reduction in Tension (GRIT) methodology can initiate de-escalation by making a small, unilateral concession to the other side, and at the same time, communicating the desire or even the expectation to get an equal response. Meanwhile, the government should initiate a secular system in order to avoid the promotion of one ethnic group or religion over another. Also, it should promote an educational system that includes all groups in the curriculum. Myanmar could look up to Malaysia for its multi-ethnic and multi-religious society.

There are numerous issues that need to be dealt with in this country that was once known for its grave human rights violations. The current government has gone further than anyone could have predicted. Myanmar has a long road ahead to establish democracy and liberalization, and it is important for the international community to support these developments. There is strong political will from the government to change and such motivation can only be seen once in a lifetime and therefore should be capitalized on. Myanmar can only succeed with the expertise of the international community in order to normalize its society after years of mismanagement.

The views expressed here are those of the author and do not necessarily reflect those of Fair Observer, ISIS or CSIS.