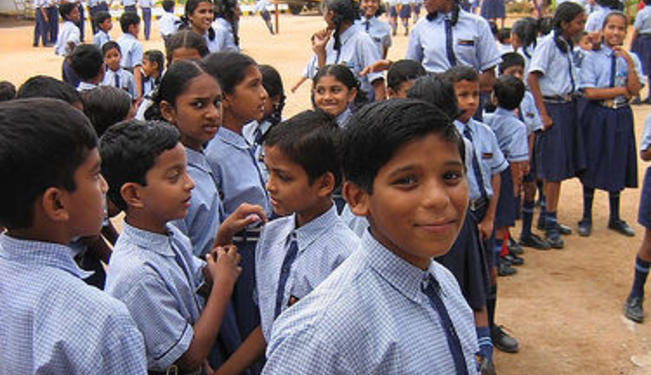 This is an edited and somewhat expanded version of my comments in the education panel of the Harvard India Conference 2012. The topic of discussion was "Education in India – Opportunities and Challenges in the Next Decade".

We are considering what challenges and opportunities in education await India over the next decade. I would like to share with you three lenses I look at the question through — from the perspectives of the individual, the community, and technology.

For me, the highest purpose of education for the individual is simply this: to cultivate attention — the state of being where one can engage with the question at hand with clarity, care and affection, bringing all one’s resources, physical, intellectual, emotional, social and spiritual — to bear. Only then does the individual begin to approach that holy grail of education. One can then be a self-learner, who can allow the scaffolds of school, teacher, books and accumulated wisdom to fall away without undermining their importance in bringing him where he is.

How do education, and educators, meet that challenge? It seems clear that as long as indoctrination, as opposed to creative inquiry, remains the goal of organised education, we have a task at hand. That task is both about discovering how that higher purpose is to be approached, and about how to engage with the sensibilities that do not lay the same emphasis on it. We are not very good at it, having pursued rather vigorously the other kind of education for several centuries, first in the service of a colonial master and then in the cause of nation-building. To move away will require a patient but persistent dialogue with various parts of society, as well as actual demonstrations of what such an education can mean for the individual.

One interesting example of this problem, though by no means the only one, is the increasing vocationalisation of education. It is hard to find anyone at all, at even the highest policy-making levels in India, who does not act as if the only goal of education is to produce a well-adjusted work-force for the industry. That is a worthy goal, but scarcely enough by itself for any of us to flourish.

My dialogues in villages and towns with parents and other community members often involve people discovering that they want their sons and daughters not only to become good doctors or engineers, but also good husbands and friends and neighbours; they want them to be not just good workers, but good co-workers. They do want them to be people who have an eye for beauty, a capacity to engage with the unknown, a sense of their connection with the larger world. But it needs drawing out, simply because we have for too long believed that education needn’t concern itself with those aspects.

At the level of society, two key issues occupy my mind. Over the last few decades, India has seen dramatic changes in the way society is organised. Nuclear families in India today account for over 70% of all families, compared to just over a half, a generation ago. This is a seismic change, and has imposed extraordinary stresses on the way the community educates its young. The family support systems are less in evidence, and parents are less able to spend time with their children. As a result a huge loss of institutional and cultural memory is occurring every day.

This is problematic from the educator’s point of view, but it is especially troublesome for the less affluent, the less privileged and the less well-connected. That, unfortunately, is about 70%-80% of the children in the country. As a result, the education system has turned into a giant engine for what Anthony Carnvale of Georgetown University calls, in the US context, the intergenerational reproduction of privilege, scholar-speak for “the mighty get mightier, the poor poorer”. It is even truer for India, where the application of both public and private resources is highly skewed in favour of the more privileged.

The inequality does not only create social stresses and potential violence– issues that should rightly concern any educator. They also impose a large cost in terms of society’s creativity, productivity and its capacity for joy. While perfect equality is only found in a dysfunctional utopia, gross inequality is an invitation for a community to disintegrate.

The other challenge that concerns me is the lack of involvement by communities in the education of their children. As we stand today, organised education, whether public or private, pays practically no attention to contextualising education, respecting local traditions or inviting the community into the classroom. For a country with the diversity of India, this is extremely problematic.

The Right to Education Act of 2010, with all the noble intentions which marked its conception, is a huge step backward on the path of empowering communities to become a part of the education of the young. It implicitly vests, in the state, all authority and wisdom about what is worth learning, how and where it should be learnt and who should teach it. As a result, a large number of innovative education practices that have flourished in quiet nooks and under village trees are threatened with closure.

The challenge for educators here is to discover ways in which feedback from communities about what is valued and relevant to them, gets incorporated into the curriculum and the teacher-student relationship. This involves the educators acknowledging both the limitations of the models under which they operate, and the value of the wisdom of the community. The makers of the constitution, mindful of this, made education a state, rather than a union, subject but even that is not enough. In my work, we come across cases daily where a state capital-mandated educational practice is grossly inadequate for, and even unfair to the children being subject to it.

And finally, I want to talk about two challenges of incorporating technology into education. The first is comparatively straightforward. At the moment most technology initiatives, at least at the school level, seem to be delivery mechanisms either for existing content or for new tech-related content. We see little anchoring of it in genuine enquiry, or a framework of meaning-making. Without an embedded organising principle, it is hard to see such technology making more learners than technicians.

And yet, technology has an enormous potential for enhancing the skills of enquiry and deeper reflection. It can dramatically reduce the repetitive drudgery in a number of tasks and free the mind to focus on the creative tasks. The challenge for educators is to use technology so that it harnesses this creative energy.

The other challenge is somewhat subtler. Technology has been hailed as the educator’s panacea, helping solve the problems of access for the poor, uneven teacher quality, and lack of interesting learning materials in the classrooms. In reality, available data suggests that we must be very mindful of the inequality enhancing effects of technology.

By its nature, technology serves to improve the output-input ratio of existing production processes. The wheel made it possible to haul a larger load over larger distances using the same effort. A networked computer gives the one who knows how to use it, access to a much larger volume of information compared to one who doesn’t.

This, of course, enhances the overall welfare of the community using the technology. However, as it does so, it inherently also amplifies the existing processes that manufacture inequality in a society. We don’t know if there was a name for some people not having access to the wheel. We do have one for uneven access to the computer network. It is called ‘digital divide’, and is something that rightly concerns educators and leaders around the world.

We can point to many cases where the use of technology seems to have evened out existing inequalities. However, we discover, mostly, that new technology has simply created a new set of winners who are now on the way to becoming more than equal. The identity of those who are unequal changes, but the existence of inequality continues.

This is not to say at all, that technology should therefore be shunned. The challenge for us is to be aware of the many ways in which technology might exacerbate inequalities, and for us as a society, to take steps to mitigate it.

Challenges, as the Chinese say, are opportunities. The ones we see around us today are potential ladders upwards.