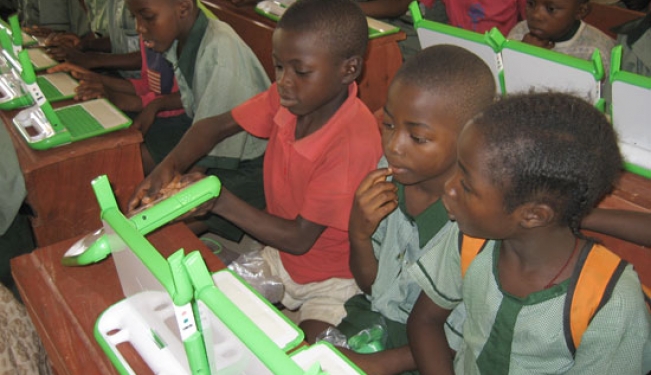 An Evaluation of “One Laptop Per Child”.

The One Laptop Per Child (OLPC) program started as an initiative by the Massachusetts Institute of Technology to give all children ages six to twelve an XO laptop, which is a cheap, sturdy, and very basic laptop that can connect to Wi-Fi and other XO laptops.  The laptops use very little electricity and can be charged with solar energy.  The idea behind OLPC is that providing disadvantaged children with access to computers will help facilitate modernization, equality, and learning.  The program has attracted attention, and has already been implemented in Uruguay under the name Plan Ceibal.  Now, as many other countries consider whether this program is worthy of their efforts and money, it is important to evaluate its true potential as well as its possible  detriments.

According to a study by the International Development Bank (BID) in Peru, each XO laptop costs about 200$ USD per child, per year.  This implies that if  this program were to be implemented in Mexico, the total cost would approximate three billion dollars a year for fifteen million children.  Furthermore, if computer laboratories for laptop instruction are opened, the cost would rise an additional twenty dollars per child per year.  Although the software for the laptops is free, and many of the educational software programs can be easily opened on the internet with no additional costs, three billion dollars is a significant annual expenditure for developing countries.

The most significant difference between education with an XO laptop and without one is the introduction of constructionist learning instead of traditional memorization, instruction, and information repetition.  The laptops encourage children to use logic and creative construction, which produces an interactive experience.  With games like TamTam, a child can compose music by choosing an instrument and then pressing keys.  A game from Uruguay, “Un paseo seguro” (A safe stroll) virtually places a child on the street; the player then has to guide it through the crosswalks, looking left, right, and left again before crossing the street.  In “El robo al museo” (The Robbed Museum), kids have to find art pieces that were stolen from the city museum, while exposing them  to the paintings and artists that shape our culture.  Some games even show historic museums where children interact by rebuilding puzzles of national paintings and read about traditional festivities. With games like “Pancho y su máquina de hacer cuentos” (Pancho and his Story Making Machine) children can choose characters and explore different plots and narratives.  All these games are a lot more interactive than textbooks, and frequently prove to be more engaging.  However, the critical question is whether children are actually learning more.

The games made for the XO laptop are very entertaining— bright colors and sound effects keep children passionate about learning. Nevertheless, writing in an actual notebook might be a more effective way to learn.  When a teacher is dictating or explaining a new lesson in a classroom setting, writing in a notebook is a better way to store information in the brain. This is because memory works as follows: first, we hear the teacher explaining the lesson. The teacher probably talks faster than we can write, so we need to keep the teacher’s phrase in our memory for a few seconds before we get a chance to jot it down.

This rehearsal in the mind before we get a chance to write consolidates the information and encodes it into long term memory.  Without the few seconds of mental information rehearsal, information simply cannot be retained as easily. For memory to work, three things have to happen: attention, rehearsal, and sufficient engagement and understanding for the content to be encoded into long-term memory. As a result, taking notes on a computer is much faster and more automatic, so the information does not have to be kept in the brain before the fingers have a chance to write it down. Since there is not as much rehearsal as with a regular notebook, memory does not work as well. On the other hand, the computer games after the lesson can help engage with and accentuate the understanding of classroom information.

While computer games can help reinforce classroom lectures, computers have other advantages.  A child may develop research capacities, which could enable him to easily access information.  With the informational access provided by the internet, memory becomes more expendable.  Taking into account the advantages and disadvantages of computers, it is likely that these computers may be too large a cost for primary school students who are just learning how to spell.  Perhaps the three billion dollar cost of these laptops should be reserved for children in Middle School who are learning how to truly engage in research, such as learning the fundamentals of argumentative essays.  Few would argue that computers are indisputably fantastic tools for composing research papers on myriad subjects.

As stated earlier, the obvious purpose of the OLPC program is to  enhance learning, promote equality, and provide a connection to the modern world. Since the laptop belongs to the child during the entirety of his primary education, these laptops become empowering to the individual. This is remarkably powerful for children in rural communities. Unfortunately, according to the BID study, the poorest children tend to use the laptops for recreation instead of for academic purposes, whereas more privileged children actually use the laptops educationally. In effect, the inequality gap remains, even with the laptops.  If the children are simply given laptops, without having computer instruction in school, then the educational value of these laptops is lost, and the laptops can thus prove to be distractive and detrimental.  As a result,  if children are spending their time playing internet games instead of doing homework, school performance can actually be stunted. The OLPC needs to make sure that the proper infrastructure and support exist before they hand out laptops. Otherwise, the program may as well be called “OGPC” (One Gameboy Per Child).

Although ignoring the new revolution in technological education would be a missed opportunity, buying into the modern world requires more than money.  For the OLPC program to truly succeed, parents and teachers need to take full advantage of their place in children’s lives. Parents and teachers need to promote the educational qualities of the laptop by incorporating them in classrooms and by imposing a balance between playtime and work-time on the computer.  OLPC’s Sugar programmers have proved to be very successful at making education seem like play, but children need the extra push of computer labs, supportive teachers, and attentive parents. Taking the expenses of this program into account, it would be a wise decision to postpone the age group the computers are destined to reach. Computers mark a huge difference in Middle School students using laptops for research, higher level writing, and social networking. These computers may revolutionize modernity and academics in our world’s most neglected areas. OLPC has unlocked a huge potential, but this potential must first be optimized.