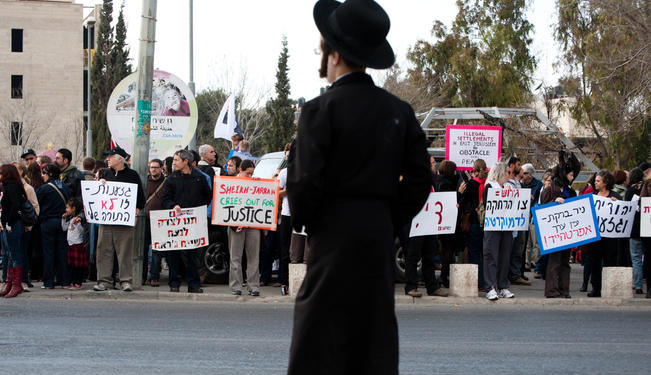 Mitchell Plitnick, former Director of B’Tselem and the Jewish Voice for Peace, speaks to Heba Al-Adawy about the future of political activism, and the obstacles to peace in the Israeli-Palestinian conflict.

Heba Al-Adawy: As an American Jew, what (and when) was the turning point in your political consciousness with regard to the Israeli-Palestinian conflict?

Mitchell Plitnick: There was no single turning point. As a young child in the 1970s, I was fed an absurdly one-sided version of Israeli history and current politics (of that time). The picture was that Israel only ever wanted peace and always had its hand out in friendship, but "the Arabs" hated Jews so much that all they wanted was to kill us. By the time I was nine years old, I realized this couldn't be true. No one, and no country, is ever so much in the right. So, I sought out academic literature, and even wholly Zionist narratives would paint a more nuanced picture than the one I was getting. Outside of a brief period when I was very young, I like to think my views have always been based on the information I have.

Al-Adawy: How would you describe your current stance on the Israeli-Palestinian conflict?

Plitnick: I'd describe my views as pragmatic. My interest is in resolving this conflict, and my personal position is that, as an American citizen, my job is to get the US to change its policy toward that goal, rather than the destructive role it has played thus far. I can affect little in Israel, Palestine, Egypt, Turkey or Iran, but I can affect things in my country. I have no love for nationalism of any kind, Jewish or Palestinian, but I have to acknowledge that most involved in this conflict do not feel that way.

So, I seek the resolution that will work. I prefer a two-state one, but I believe the settlements have killed that possibility, at least as it was formulated under the Oslo Accords. I fear that there is too much anger and hate, as well as factionalism and in-fighting, on both sides for one state to work. And, at this point, I don't think that question matters. There are so many conditions that need to change before any solution can be put to the test; we can afford to work on changing those conditions and then see where we are in terms of ultimate solutions.

Al-Adawy: What kind of support and what obstacles have you faced from Palestinian, American-Jewish, and Israeli communities vis-à-vis your activism?

Plitnick: As for responses from others, I have always tried to express my view as I have seen it, and as a result, I think I don't fit into any ideological camp. This has certainly made my career very difficult. Obviously, the organized Jewish community has expressed a lot of hostility toward me, but that hasn't been my world for many years. In general, the biggest obstacle to my activism has been the desire by others to fit me into one ideological box or another, and the resentment they feel when I don't fit into theirs.

Al-Adawy: What about the sentiments or dissensions among the Left in Israel?

Plitnick: The left in Israel is losing ground fast. Assuming we're talking here about a true left wing, and not that represented in Israel by centrist parties like Labor and Kadima, there remains a lot of divisions among the left in Israel. Much of the left wants to ignore the occupation and focus on social issues in Israel. Some of them weakly argue that improving social equality in Israel will promote an end to the occupation, but that argument is transparently facile and self-serving. It reflects a left that believes it might as well improve conditions for itself and minorities within the Green Line because ending the occupation is hopeless.

Then there are those who are still trying to end the occupation along the traditional two-state lines. These groups suffer from the wound inflicted by separation — they do not understand the changing nature of Palestinian politics. They do not comprehend that fewer and fewer Palestinians are willing to compromise to the extent required on the right of return, and even fewer than that are willing to see a de-militarized state unable to defend itself from Israel or other attacking nations in an increasingly unstable region.

There is, like there is outside, a small but growing contingent of “one-staters” who advocate leaving the settlements where they are and creating a single secular democratic state. But even among the Israeli left, this is a small minority.

Al-Adawy: Could you comment on the activities of Israeli conscientious objectors at this moment in Israel, or of American Jews in the US? How hopeful are you with regard to their activism? And do you feel there has been a growth in their numbers over the years with successive Israeli assaults?

Plitnick: I have the utmost respect for all Israeli activists across the board, from the mainstream Peace Now to the radical Anarchists Against the Wall. It is much harder to be an anti-occupation activist in Israel than in the US or Europe. Above all others, those who declare conscientious objection and go to jail for their convictions can look forward to a life of ostracism, difficulty finding work and other kinds of harassment. This earns them my admiration.

Unfortunately, that's all it really accomplishes. Israel has moved far to the right, and opponents of the occupation are diminishing in both number and political power, despite the work of such brave activists. While to some extent, Israeli policies have made opponents of those policies more radical, it's driven far more out of the country or at least out of politics.

In the US, there is some more hope, but also a lot of cause for concern. J Street has done a lot more to prove its pro-Israel credentials than its pro-peace ones. It continues to urge a two-state solution and what it calls "robust US diplomacy," while at the same time opposing any and all material pressure on Israel. Their apparent tactic is: if we ask Israel really, really nicely, add a few more "pretties” to the please, they will do as we ask. That is obviously not going to work. But worse, it means they torpedo more useful actions, especially by churches.

On the other hand, the rise of my former organization, Jewish Voice for Peace, offers a huge amount of hope. More and more people gravitate to their side, as more and more people recognize that only pressure on Israel will ever change the status quo.