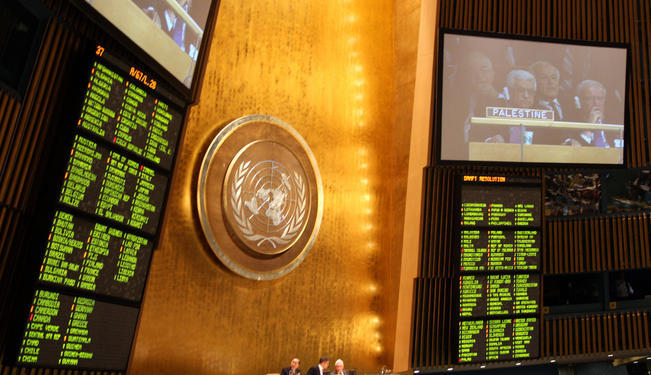 The recognition of Palestine by the UN General Assembly as a non-member observer state has diplomatically affirmed the Palestinian cause for self-determination, argues Noura Erakat. The bid will not, however, work to salvage the two-state solution, which has long been declared dead.

The Palestinian UN bid for non-member observer status was certain to pass as the majority of UN member states had expressed their support for the initiative. The positive vote will do little to alter the course of Israel's ongoing settler-colonial expansion in the West Bank or its racially-motivated policies aimed at the forced population transfer of non-Jewish Palestinians throughout Israel and the Occupied Palestinian Territory. Still, the significance of Palestine's bolstered status is three-fold.

First, it diplomatically affirms the Palestinian cause for self-determination as a just one amongst the community of nations thereby rebuffing Israel's insistence that the conflict is a national security issue. Unfortunately, those states will not place the necessary pressure upon Israel to thwart its structurally violent practices.

Second, it saves the Fatah-dominated Palestinian Authority (PA) from the specter of complete irrelevance at a moment when Hamas has emerged as a viable political player in the region together with the admission that the peace process has failed. This will not only benefit the Palestinian Authority but Israel whose occupation costs have been significantly reduced thanks to the PA's security apparatus as well as the United States which has been its primary financier.

Finally, the new status will allow Palestine to appeal for International Criminal Court jurisdiction thereby enabling it to hold Israel to account for its alleged war crimes committed in, now two, Gaza operations as well as its settlement colonial project in the West Bank.

The bid will not, however, work to salvage the two-state solution, which has long been declared dead. Israel has civilian and military control over sixty-two percent of the West Bank; the Separation Wall has further confiscated another thirteen percent of the West Bank; and the Jewish-Israeli settler population now numbers six hundred thousand. East Jerusalem, which is part of the West Bank, has been the site of rapid ethnic cleansing where Israel is explicitly pursuing a Judaization campaign. Meanwhile, Gaza is territorially separated, isolated, and besieged. The World Health Organization says it will be unliveable by 2020.

The next steps forward include dealing with the one-state reality. There exists one political entity between the Jordan River and the Mediterranean. This area is home to an extricably linked population made up of Jewish Israelis as well as Muslim and Christian Palestinians, which the Israeli state distinguishes between based on religion — irrespective of their specific territorial location within Israel or the Occupied Palestinian Territories (OPT).

*[A version of this article was originally published by Jadaliyya].