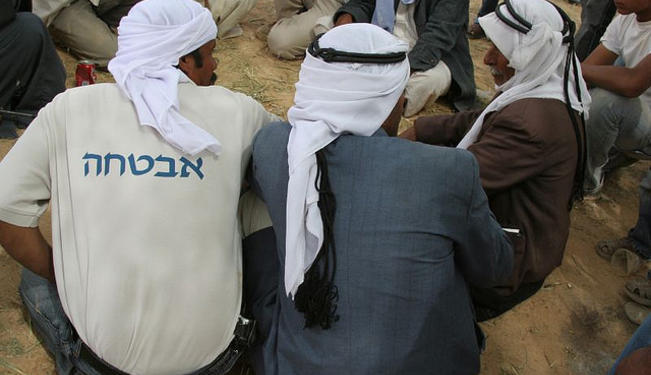 The two-state solution discourse leads the international community to place an overwhelmingly emphasis on Palestinians in the West Bank and the Gaza Strip, but Israel’s policy towards the Negev Bedouin suggests a grim future for its own Arab citizens.

On November 12, Israeli police raided the Bedouin village of Bar Hadaj in southern Israel’s Negev region. Clashes between the police and villagers and students quickly broke out, and dozens were injured. Twenty-one Bedouin citizens were arrested and detained after being shot repeatedly with rubber bullets, shocked by tasers, dragged, and handcuffed. Seven were minors.

Although Bir Hadaj is recognized by the Israeli government, unlike several dozen other villages scattered across the vast Negev region, villagers are seldom granted building permits. Due to a birthrate that far exceeds the national average, residents have no choice other than to build illegally. In this particular instance, police came equipped with demolitions orders, officials from the Interior Ministry, and bulldozers: many homes and the local mosque were set to be demolition.

Undercover officers came draped in costumes disguised as “Arabs” and seized civilian vehicles in order to enter the village undetected, before they proceeded to launch an arrest campaign against anyone thought to be conveying an “expression of protest.”

Among those targeted with tear gas were the pupils in the local elementary school — ostensibly for expressing protest — and 29 children were transferred to a nearby hospital. Yuval Ben-Ami, noting the complete absence of Israeli media, wrote that a pregnant woman was struck in the stomach by a rubber bullet, many of which were fired indiscriminately.

A History of Expulsion and Discrimination

Before the 1948 establishment of the state of Israel, some 1.3 million Palestinians and 600,000 Jews lived across the British Mandate of Palestine. From the nearly two million people residing in Palestine, around 110,000 were Bedouins living in the Negev region.

The majority were dispossessed of their land in the 1948 Arab-Israeli War, although some remained in what became Israel. The systematic dispossession continued: tens of thousands were expelled from 1948 until 1950 and several more thousand throughout the 1950s. By 1960, a census found that some 11,000 remained.

Before the 1948 war, Jews owned around seven percent of the land, and an overwhelming majority of cultivatable land was owned by Palestinians. After the 1948 war, almost every parcel of Bedouin-owned land was confiscated and nationalized.

In 1954 those who were able to stay, Israeli historian Ilan Pappe recounts, were registered as Israeli citizens and forced to sign an oath of allegiance to the Jewish state, essentially rendering themselves but mere footnotes under a regime founded on notions of ethnic preference. These new citizens were then forced relocated to a small enclosed area that encompassed a mere ten percent of the Negev.

British journalist Ben White points out that around 95 percent of the land belonging to the pre-1948 Negev community was confiscated “through the different laws and bureaucratic processes Israel employed.” In the 1970s, he adds, then Minister of Agriculture Ariel Sharon personally oversaw the destruction and removal of over 900 Bedouin communities.

These communities are plagued by poverty, partially inflicted by the government’s refusal to allocate state money. According to Adalah, a legal center that aims to protect the rights of the Palestinian Arab minority in Israel, over 67 percent of Bedouin families live below the poverty line, as opposed to a national average that hovers around 20 percent.

Additionally, Arab localities receive 30 percent less educational funding than their Jewish counterparts. The immediate effect on the Bedouin Negev has been a dropout rate of approximately 70 percent coupled alongside a crime rate that far exceeds the rest of the population.

From the total 200,000 Bedouins mentioned above, around 80,000 live in over 45 “unrecognized” villages in the Negev. Each and every village either dates back to before the 1948 establishment of the state, or was established by Israel’s military regime (which ruled over the Arab minority much like the occupation regime rules the present day West Bank until its formal liquidation in 1967) during the 1950s.

Although as far back as 1992 when the International Court of Justice at the Hague ruled that these villages ought to be recognized and provided basic water services at the very least, until today they are denied all basic municipal services that the government provides to the rest of the country: electricity, transportation, roads, water, sanitation, healthcare, education, and communication services (such as postal and telephone), among others.

It is more than a little ironic that the government relocated Bedouins to the very lands on which they are said to have illegally settled, and that Israeli officials regularly claim that the Bedouin are a demographic threat who plan to usurp the Negev in its entirety.

Though there are several kibbutzim and moshavim, Israeli forms of Jewish agricultural collectives and cooperatives, which engage in the same basic farming practices as Bedouins in the Negev, not a single one is denied basic services or faces demolition.

Unrecognized villages are regularly demolished by state forces in a fashion that overtly resembles military operations, despite almost unequivocal objection from national and international human rights organizations. Umm Al-Hiran, for instance, situated in the northern Negev, was delivered demolition orders in October. In its place, they were told, a Jewish settlement will be erected.

Al-Araqib has been destroyed over 40 times since 2010, while only a few defiant families have stayed. The Jewish National Fund, a quasi-governmental agency that aims to ensure Jewish ownership over the majority of the country’s land, intends to plant a forest as part of a large nature reserve on top of the village’s remains. The remaining residents, dedicated to staying on their lands, continue to resurrect Al-Araqib after every demolition, for which the government has sued the residents to pay the cost.

The Prawer Plan: Bantustanization of the Negev

In September 2011, Israeli legislators approved the Prawer Plan, the implementation of which will result in the destruction of 35 unrecognized villages and displacement their approximately 70,000 Bedouin citizens.

On the Bedouin land earmarked for demolition, the government will put military centers, forests, and Jewish settlements.

Supporters of the plan claim that the potentially displaced will be compensated with homes and land in eight government-built townships across the Negev. Said townships, however, already exist and are also deprived adequate state funding and attention.

To make matters worse, uncultivated land is not eligible for compensation, regardless of the presence of residents or homes on it. Once the plan is executed, no Bedouin will be permitted to live on or make a legal claim to any land (excluding townships) in the entirety of the Negev.

International calls for the Israeli government to abandon the Prawer Plan, notably from the European Parliament and the United Nations Committee on the Elimination of Racial Discrimination, have fallen on deaf ears. The plan began in August 2012 and is expected to continue without delay.

Apartheid as a Larger Scheme: Arabs as a Footnote

Today, the Palestinian Arab minority represents around 20 percent of the total Israeli citizenry, or some 1.5 million people. Indeed, this oft neglected demographic is very distinct from its counterparts in the Occupied Territories or exiled in refugee camps in the neighboring Arab states. In the eyes of Israeli policy-makers, nonetheless, it is seen as equally dangerous: Arab citizens are always viewed as demographic threats, at best, or more often as a fifth column.

The systematic discrimination, displacement, and oppression of the Negev’s Bedouins must be understood in the broader context of a state committed to preserving a Jewish majority. It is not “creeping” discrimination; these are apartheid’s defining characteristics, repackaged and thinly cloaked in the rhetoric of security and existential preservation.

The 2002 Rome Statute of the International Criminal Court defined apartheid as "committed in the context of an institutionalized regime of systematic oppression and domination by one racial group over any other racial group or groups and committed with the intention of maintaining that regime."

Ethnic cleansing, according to the United Nations, is "rendering an area ethnically homogeneous by using force or intimidation to remove from a given area persons of another ethnic or religious group."

Accordingly, Israel’s policy towards the Negev Bedouin violates both of these crimes. Now that the Palestine Liberation Organization has received international recognition as a legitimate state in the United Nations General Assembly, the world has committed itself to settling an age old conflict by creating a sovereign and independent Palestinian state as Israel's newest neighbor, hoping to eventually end the occupation that began in 1967.

This leaves an inescapable unanswered question: what future do Bedouins (along with the rest of the Arab Palestinian minority inside Israel) have in a state designated exclusively for the Jewish people?