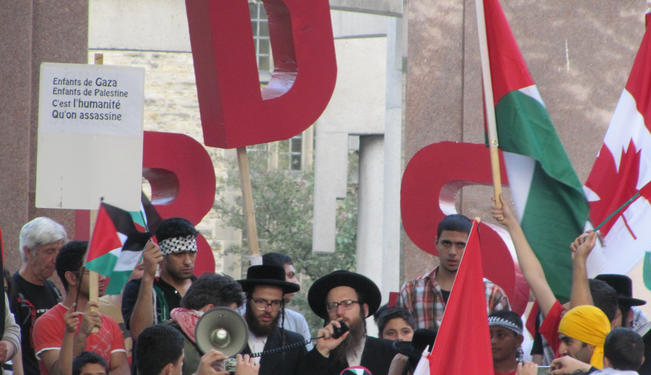 The Boycott, Divestment and Sanctions movement’s biggest problem is that it will not work. This is the final part. Read part one here.

“The Problem with BDS is the Ambiguity of the Goal”

Even Prof. Norman Finkelstein, an outspoken critic of Israeli policy who lost his tenured position at DePaul University because of his views, has criticized the BDS approach. In an interview on the occasion of the publication of his book Knowing Too Much: Why the American Jewish Romance with Israel Is Coming to an End, he stated:

"I’ve written a little book on Gandhi, and one of the significant insights of his is that it’s important not only for your tactics to be perceived as moral, the public also has to see your goal as moral. And the problem with BDS is the ambiguity of the goal. Their official position is: 'We take no position on [the legitimacy of] Israel.' While BDS is a legitimate tactic to force Israel to accept the two-state solution, it has to have a just goal, which means it has to include recognition of Israel as a state."

This doesn’t mean that an Israeli right-wing McCarthyite witchhunt of boycott advocates is any better. BDS advocacy should definitely be a part of the democratic debate in Israel, and “academic monitors” of Israeli professors and proposed laws against such advocacy undermine the democratic right to freedom of expression.

Productive Nonviolent Techniques Against the Occupation

So if BDS is not a productive approach, what civil society nonviolent tactics might be effective in promoting an end to the occupation and the achievement of a two-state solution?

1) Boycott of the Israeli Settlements and Their Products

A boycott of the Israeli settlements and their products sends a clear, targeted message to the Israeli government, public and their supporters. Such a campaign would express clear opposition to the settlement enterprise in the Occupied Palestinian Territories (OPT), one of the primary obstacles to a resolution of the conflict, without challenging the State of Israel’s right to exist within the internationally recognized 1967 borders.

In this respect, initiatives in the United Kingdom, South Africa and Denmark to have products labeled “Produced in the Occupied Territories,” and not simply as “Israeli products,” are a very welcome and constructive initiative.

The same is true for the Israeli artists who refuse to perform in the Ariel settlement in the West Bank, an initiative which has received the backing of international artists such as singer/actor Theodore Bikel, award-winning playwright Tony Kushner and many others. However, it should be noted that the construction workers who are building the settlements tend to be Palestinians. This is a major problem, though it is understandable that those workers need to provide for their families and do not have an alternative source of income.

2) Critical Engagement with the Israeli Intellectual World and Artistic Audiences

As an alternative to a boycott of Israeli academic institutions, performances in Israel and music festivals, critical engagement with the Israeli intellectual world and artistic audiences sends a very powerful message. Once again, a total boycott tends to be interpreted as a questioning of Israel’s right to exist. Critical intellectual and artistic engagement sends a targeted message to the Israeli public: “We support you as people, but not your government’s policies.”

Recent powerful examples of such critical engagement include the acceptance speech by British author Ian McEwan, winner of the Jerusalem Prize at the bi-annual Jerusalem International Book Fair in 2011, who presented a powerful critique of Israeli policies and the occupation, in the presence of President Shimon Peres, Jerusalem Mayor Nir Barkat, and right-wing Minister of Culture Limor Livnat. He followed in the tradition of a previous Jerusalem Prize winner, Susan Sontag, and others. Singer Leonard Cohen announced that he was giving all of the proceeds to his 2009 concert in Israel to the establishment of a Fund for Reconciliation, Toleration and Peace, to promote Israeli-Palestinian peace. And Madonna announced that she was launching her 2012 world tour with a “Concert of Peace” in Israel, and dedicated it to the 600 peace activists from the Palestinian-Israeli Peace NGO Forum whom she invited to be her guests at the concert. She even declared in a mid-concert speech that “you can’t be a fan of Madonna’s if you are not a fan of peace.”

Hunger strikes by Palestinian prisoners in Israeli jails are another very powerful nonviolent tool for action against the occupation, which resonate throughout the world. Inspired by the principles of Gandhi in the Indian struggle for freedom, the hunger strike tactic has been used effectively in many national liberation struggles. Abie Natan, the Israeli peace activist who ran the Voice of Peace radio station, used the hunger strike tactic in a 40-day protest against the settlements.

Another potentially effective Palestinian nonviolent tactic, this time at the official level, is the initiative to upgrade the Palestinian status in international institutions, beginning with the UN and its associated bodies, which would help to establish “facts in the international arena,” parallel to the way the Zionist movement established “facts in the international arena” via the Balfour Declaration and UNGA Resolution 181 (the Partition Plan). Such upgrading will also enable the Palestinians to have recourse to institutions which are responsible for international law, which can be a lever to help end the occupation and achieve national liberation.

Israeli-Palestinian scientific cooperation is another powerful nonviolent tool, which while not necessarily directed specifically against the occupation, builds the foundation for future Palestinian-Israeli cooperation, for the sake of both peoples.

A prime example was the report about cooperation between Israeli physicians and Palestinian physicians in Gaza who successfully identified a unique strain of the MRSA bacterium in Gaza City. This work is the product of a joint Palestinian-Israeli research group established in 2009, with Israeli Jewish and Arab physicians, and physicians from Gaza, including Dr. Ezzeldeen Abu al-Aish, who despite having tragically lost three young daughters and a niece during the Gaza War to IDF fire remains dedicated to cooperative activity. The activity of Israeli, Palestinian and Jordanian chapters of Friends of the Earth — Middle East, around the productive use of water resources is another good example.

The innovative intellectual, educational, consciousness-raising and advocacy work of such joint NGOs as the Palestine-Israel Journal, Israel Palestine Center for Research and Information (IPCRI), All For Peace Radio, Bitterlemons, the Geneva Initiative and OneVoice, are all prime examples of joint, nonviolent activity against the occupation. They help to develop the innovative ideas and strategies necessary to continue the struggle, and to build the constituencies necessary to support an end to the occupation and a resolution of the conflict.

And finally, the ongoing activities of the 100 or so peace and human rights organizations involved in the Palestinian-Israeli Peace NGO Forum, both on a uni-national and bi-national basis, continues to be a powerful tool for working against the occupation, and signaling that “there is a partner” on the other side.

This is a personal list of suggestions. I’m sure that many additional ideas and initiatives can be added to the list.

To conclude, I recently attended a book launch in Tel Aviv for a book entitled The Politics of Victimhood by Dr. Ruth Amir. When she was asked what moved her to write the book, she pointed to her two young granddaughters who were present, and said, “First of all, for them, so that they can have a future.” The point is not to allow ourselves to be victims, or victimized, but to proactively seek effective ways to end the occupation, for the sake of both peoples.

*[This article was originally published by the Palestine-Israel Journal, Vol. 18 No. 2/3, 2012, devoted to Civil Society Challenges].