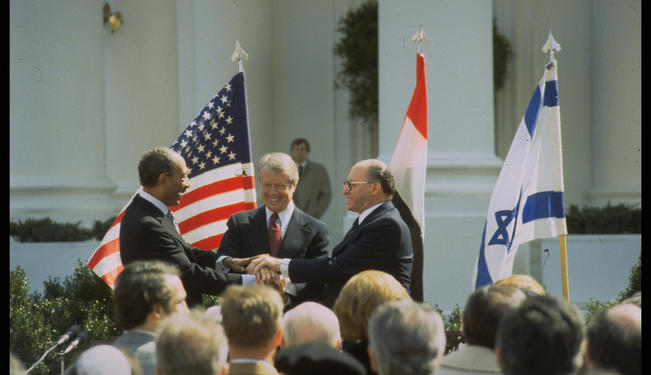 There is one conventional wisdom regarding the Middle East Peace Process, which has already become axiomatic: There can be no peace without active American involvement. As conventional wisdoms go, so is the case with this one, argues Josef Olmert, former Israeli peace negotiator.

Somewhat true, somewhat exaggerated, altogether an oversimplification of an otherwise complicated reality. If we track the beginnings of the saga known as the Middle East Peace Process to the aftermath of the 1973 war, we have enough historic perspective to evaluate the pros and cons of the case on hand. The verdict must be that the US does play a significant role, though less crucial than what it seems to be. The two most important events in the annals of the search for peace in the Middle East, the Egyptian-Israeli Peace Treaty and the Oslo Accords were not initiated by American diplomacy, yet could not have come to a successful conclusion without American diplomatic mediation, as well as generous financial incentives to the parties involved; so was the case with the Israeli-Jordanian Peace Treaty.

Why and When the Peace Process Worked

Menachem Begin and Anwar Sadat were wise enough to detect the exact point in time when each of them felt that something dramatic had to be done in order to break the historic deadlock between their countries. Detecting an historic opportunity and making good on her are two different things. For the first to lead to the second, the two great leaders needed to mobilize all their political acumen and take advantage of a comfortable domestic and regional setting.

To do that, they needed political courage, which they had ample supply of, and only then American intervention, composed of the tempting blend of financial rewards with effective arm-twisting could work. Not any time before. Surely, President Carter rose to the occasion, but the show was not really his. It belonged then and forever to Begin and Sadat. The American role was greatly facilitated by their ability to communicate with and enjoy the trust of the protagonists simultaneously; a lesson to be learnt by any power which wants to play a useful role in any future move between the Israelis and the Palestinians.

This lesson was learnt by the Norwegian mediators who brought together Israelis and Palestinians in Oslo, and orchestrated the Oslo Accords. A lot has happened since 1993, the Accords may seem somewhat irrelevant and outdated, but they are not. The long road for reconciliation between the sworn enemies had to start somewhere, and Oslo was the ice-breaker. Here too, American involvement in the very latest stages of the process became effective only because the parties had the same interest at the same time to forge the deal. Not a marginal role for the US, but not also the decisive one.

The story of the Israeli-Jordanian Peace Treaty from 1994 is another illustration of the American role, one of facilitation and finish, but not that of an instigator. Two factors made this peace feasible, the first were the Oslo Accords.

The late King Hussein always waited for Palestinian sanction for any dramatic, decisive move on his part vis-a-vis Israel. The complicated, delicate nature of Jordanian-Palestinian relations is beyond the scope of this article, but it is arguably the case that due to geography, demography and history, we deal with what can be termed as sister entities, connected to each other in many significant ways. Once the PLO, the official representative of the Palestinian National Movement, broke new ground with Israel in Oslo, Jordan had a heavy burden removed from its shoulders, and the timing for peace with Israel was perfect. This was also the case because Hashemite Jordan and the Zionist Movement pre-1948, and Israel afterwards, were engaged in an on and off relationship, marked by common interest to stem the flow of aggressive Palestinian Nationalism, which may still continue to be their common denominator this very day, regardless of spasms of verbal acrimony by King Abdullah against Israel.

The three important lessons of Middle East diplomatic achievements cited above, as well as the American role in their being, are: First, it is up to the parties concerned to decide to take the plunge. Second, it is a combination of domestic and regional circumstances, which have to exist in order to facilitate the desired agreements. Only third, it is the role of the US to bring about the finishing touches.

Why and When the Peace Process Does Not Work

When such a set of conditions and circumstances are not in place, then no diplomatic magic, no presidential charm and no financial incentives can do the trick. The ringing failures of President Clinton in Camp David II between Ehud Barak and Yasser Arafat, as well as the Israeli-Syrian talks at Shepherdstown, provide us with a grim reminder of the limitations of American diplomacy.

President George W. Bush’s two terms in office were also characterized by diplomatic failures when trying to deal with Israelis, Palestinians and Syrians. His recent memoirs well reflected his frustration. His trusted secretary of state, Condoleezza Rice, expressed the same sentiment in her memoirs.

What makes Clinton and Bush’s failures even more illuminating, is the fact that they adopted decidedly different approaches to the question of the peace process, and yet, they both failed. Clinton sent his secretary of state, Warren Christopher, 18 times, in a matter of a few years, to the Middle East. At the same time, the US had to deal with some pressing crises elsewhere, for example, with North Korea and its emerging nuclear program, and many eyebrows were raised in DC, as to Clinton’s priorities. What seemed as an obsession with the Middle East, as opposed to inaction in other parts of the world, he also attended many days of deliberations at Camp David II, putting his prestige and that of the US on the line, but to no avail.

For this or a different reason, Bush adopted almost the opposite approach, narrowing his personal involvement in the process to the minimum. His administration was far less occupied with the peace process. Thus, two contrasting strategies adopted by two American Administrations proved insufficient, when the conditions and circumstances mentioned above were not in place.

Barack Obama, like so many of his predecessors, decided that he should reinvent the wheel, and embark on a new Middle East peace initiative, as if nothing had happened prior to his inauguration. This way, he ignored 11 personal meetings between Israel’s then Prime Minister Ehud Olmert and Palestinian President Mahmoud Abbas, leading to an unprecedented peace proposal by the former to the latter. Moreover, Abbas met Olmert without demanding that Israel either froze or suspended its settlements activity. Abbas failed to give Olmert a response to the proposals, and this was exactly where President Obama had to step in, holding Abbas and the new Israeli PM Binyamin Netanyahu accountable to their respective obligations, and to pressurize them to resume the negotiations at the point where they stalled.

Netanyahu, as a democratically-elected PM of Israel, could not ignore Olmert’s official proposals, which were given in his capacity. Netanyahu faced the same dilemma in 1996, when elected as PM for the first time, and having to deal with the Oslo Accords, duly signed by an Israeli Government. He swallowed the bitter pill, and formally accepted the Accords.

President Obama though, driven by the notion that American diplomacy was capable of doing what it set to achieve, committed a crucial blunder, forcing Netanyahu to accept a 9 month suspension of settlement activity, but "forgot" to elicit a similar concession from Abbas. The "omission" proved fateful, the trust between him and Netanyahu shuttered, perhaps irreversibly, and then came the "Arab Spring", turning into the "Islamist Gloom and Doom", and no peace process in the Middle East.

Obama in the Middle East: Too Early?

New Secretary of State John Kerry was just sworn in, and his office announced his first trip abroad: to the Middle East. A few days later, the White House announced that President Obama will follow suit, and visit the Middle East as well.

I am reminded of the classic Arabic proverb: Al-Ajli Min Al-Shaytan (Haste is from the devil). Too early, and with great danger of creating high expectations without subsequent delivery. Israel may still not have a new government following the elections, Egypt is in turmoil, Syria in the midst of its internal mayhem, and the Iranian nuclear standoff in the background. On the face of it, this is a set of regional circumstances which are not conducive to a successful American initiative. Sometimes, not doing anything is better than overdoing. I personally hope to be proven wrong this time.