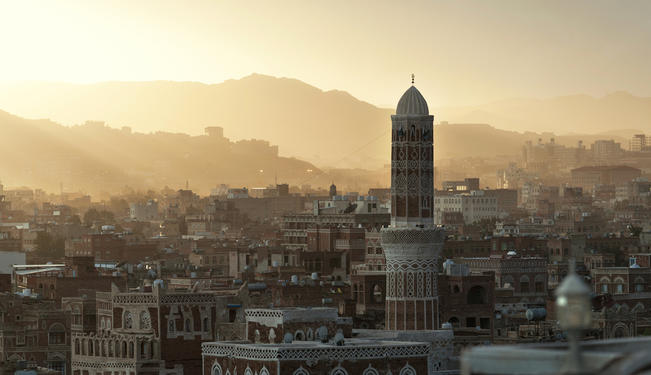 Despite the Southern Movement's influence, not all southern Yemenis are for a secession from the north.

The 22nd anniversary of the unification of Yemen was welcomed with huge protests in the south, especially in Aden. Thousands of Southern Movement supporters rallied, and not for the first time, to express their discontent with what they dub the “Sana’a regime” and to demand secession. The movement attributes the miseries of the south to the post-unification era (North and South Yemen were unified in 1990), the period when they were exploited and oppressed by the populated north.

The youth uprising of 2011 in Yemen has, undoubtedly, represented a great chance for many political parties and currents to finally manifest their demands and ideologies. The Southern Movement was no exception. Despite the existence of the movement since 2007, their activities and political weight have considerably escalated shortly after the uprising. More than two years after the Arab Spring, it could be surely said that the “street” in the southern governorates is reaching its “boiling point”: civil disobedience is conducted twice a week; intra-and inter-city roads are blocked by Southern Movement supporters on a regular basis; and South Yemen flags are hung and painted in every possible place. The daily realities in the southern governorates are so different from those in the north, that it could already be considered as a different country even without an actual political separation occurring.

Since they own many media outlets, the Southern Movement phenomenon has also occupied the headlines of local and international press and media, a motivating factor for the movement's supporters. However, the main development occurred with the advent of the National Dialogue Conference (NDC) in March 2013. The Southern Movement was allocated 50 percent of the total seats in the dialogue, a move depicting the importance of the movement in a transitional and future Yemen. The seats given to the movement meant one thing for some people: the chances of Yemen being united or divided are equal.

But perhaps the greatest acknowledgment of the Southern Movement is the northern people themselves. The popular northern discourse, which is not majoritarian but is reaching non-negligible numbers, suggests that if the south is determined for secession, then it would be wiser to give it the right of self-determination — a view which was also expressed publicly by one of the NDC members.

Characterizing the Southern Movement is a first challenge. If we stop for a moment, away from the media hype, and ask ourselves what we know about the Southern Movement, certainly, the first answer that pops up will be that it is a group which demands separation from the north and the reestablishment of pre-1990 borders — not neglecting the minority within the Southern Movement which advocates for a federal system. But does this answer suffice to credit the movement as the representative body of the southern people? There are another row of questions — answers to which are essential in order to render the Southern Movement legitimate and credible enough to represent the 4 million southerners.

Lost in the whirl of separation and unity is a central and determining question: What is the plan for a post-separation southern Yemen? Many of the Southern Movement supporters claim that this will be seen after the south gains “independence” from the north. However, and apart from the economic question, the south is far from as homogenous as the Southern Movement claims; once the unifying factor of the movement — the separation from the north — disappears, the internal cracks will start to be visible.

The fear of internal rivalries among the southerners themselves is reinforced by the absence of a clear leadership for the Southern Movement. As already mentioned earlier, the south is not homogenous in its political views, and it has already witnessed a horrendous civil war between the southern leaders themselves. Today, we still find that there are several leaders of the Southern Movement: Hassan Ba’oom, Ali Salem Al-Bidh, Tareq Al-Fadhli, and so on. These various leaders of very different ideologies and backgrounds are a source of worry. The Southern Movement is divided into several “camps” according to the leader they support.

Even in such determining occasions such as the NDC, the Southern Movement lacks a clear stance. The Gulf Cooperation Council (GCC) agreement (the transition deal that led Ali Abdullah Saleh out of power and set up the NDC) clearly states that the outcomes of the transitional period should preserve Yemeni unity. Therefore, the participation aim of the Southern Movement, once again, raises several questions. There are two possibilities that could be concluded from the movement's participation in the NDC: there will either be a fraction of the Southern Movement that accepts unity under certain conditions, or they will challenge the clauses of the GCC agreement. The answer to this question is still unknown.

Adding to that, the two rivals of the 1986 southern civil war, Al-Bidh and Ali Nasser Mohammed, are still alive, and one could fear the tension that might result from their return to Yemen. Admittedly, Mohammed has stated that he would not pursue power if secession happens; but will those words really prevail?

It is difficult to place trust in those who have had very different stances throughout history. For instance, Al-Fadhli, who is considered today as one of the Southern Movement leaders, was an Arab fighter in Afghanistan, and then fought on the side of the north in 1994 (the civil war between the north and the south) and finally joined the Southern Movement very recently. Such southern personalities, who fought for the north in the civil war, are not scarce. And this factor considerably undermines their legitimacy when claiming they are fighting for the rights of the southerners. This presents southern Yemenis with one choice: trusting those who once upon a time sold them out.

Perhaps the first and foremost source of legitimacy for any group, ideology, or political current is the number of adherents and supporters. Till this day, there are no reliable statistics regarding the number of Southern Movement supporters — even though media portrays the majority of southerners as their supporters. Therefore, it would be false to label the southerners as secessionists, since many of them are not (for a variety of reasons).

One of these southern — non-Southern Movement — groups called “Aden for Adenis,” has recently surfaced. Despite the fact this group is still nascent, it is a clear indication that the Southern Movement is failing to represent the entirety of the southern people. Aden for Adenis is a group advocating for the “independence” of Aden from the northern and, more interestingly, from the southern governorates. It uses the Aden protectorate flag used during the British colony and accuses other southern governorates of destroying Aden after 1967; thus, after independence from Great Britain.

When the group went out for a demonstration a few months ago, the Southern Movement attacked its members. This article's aim is not to debate the credibility of the group, but rather the worrisome indicator that the Southern Movement might be suppressing other southern voices — something they have accused the “Sana’a regime” of doing.

Challenge of an Expired Doctrine

Southern Movement supporters seem to rely on past memories rather than future projections when posing their demands and grievances towards the north. One would always hear about those pre-unification years when there was free education for everyone, no unemployment, equal citizenship, and no tribalism. These statements are very similar to those made by the older generation people who lived in the former Soviet republic. And this parallel is not a coincidence.

These were clearly the advantages and the “positive points” during the pre-unification period. But they have to be attributed to another entity that kept things under its control: social rule and the Soviet Union at the time. The socialist system has granted these advantages to South Yemen, which was one of the Soviet Union’s satellite countries, a system which is very unlikely to come back. The other positive outcome of the socialist regime was that it wasn't based on tribal relations. However, the non-tribalism myth didn't last long. With the civil war of 1986, tribalism traits have appeared very strongly. This conflict has perhaps started on ideological bases, but it has certainly continued and developed as a tribal and regional conflict. Therefore, the south isn't very different from the north in its social structure, making another pillar of the Southern Movement’s claims fall.

Undoubtedly, the south has been marginalized during the unification period, and this marginalization was largely reflected on Aden, the capital of South Yemen. But the south wasn't the only part of Yemen to be marginalized; other governorates such as Saada or Marib were neglected as well. However, the question southerners are asking is whether the Southern Movement is fighting a corrupt regime or just fighting for secession with no guarantee for the future.

*[This article was originally published by La Voix du Yemen.]