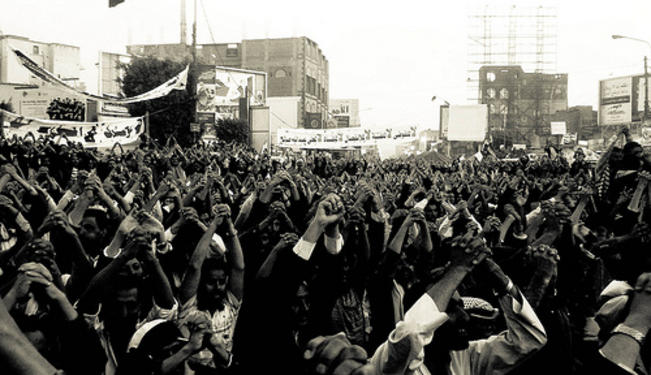 Without a solid powerbase, Vice-President Abdo Rabo Mansur Hadi – the only candidate in the Yemeni presidential elections – will remain under the influence of the old regime.

In a region like the Arabian Peninsula even an imperfect, coerced election is a step forward. This reality may not appease Yemeni youth or sincere advocates of democracy in the Middle East, but pragmatism has deterred possibilities for a prolonged civil war in a very unstable environment. For Yemenis nationwide, February 21 remains a dilemma that has still to produce confidence on a transition process addressing their grievances in totality.

The presidential election on February 21, where ballots will only include one candidate, is not perceived as a referendum on Vice-President Abdo Rabo Mansur Hadi, but rather accepted as a democratic ritual for the sake of stability. The transition from 33 years of rule by President Ali Abdullah Saleh to his long-standing deputy Hadi has provided a sense of confidence to Yemen’s regional and international partners who feared a downward spiral into a prolonged conflict in a highly volatile area.

However, it has divided the Yemeni youth whose steadfastness led to the signing of the transitional agreement mediated by the Gulf Cooperation Council (GCC) on November 23, 2011. The youth remain unsatisfied, and to a degree, feel betrayed by regional and international actors, and parties of the opposition, including Noble Laureate Tawakkol Karman who has expressed her full support for the election of Hadi.

People inside and outside Yemen continue to voice their disgust at the farcical election. The government’s failed public relations campaign is to bear much of the blame for this unfavourable opinion. The government has failed to present a coherent argument for the elections. Simply arguing that the elections are the most promising option for stability has not been sufficient to convince the people or critics. Claiming this option is constitutional and democratic has also further enraged protesters. There is nothing constitutional about the transition process, nor is there a legitimate democratic nature to the election beyond the fact that consultants convinced the government to allow everyone over 18 years of age to vote with valid government identification, in the absence of updated voter registration lists.

The government has failed to acknowledge the true nature of the transition process. Despite an evening television appearance this past Sunday by both Vice-President Hadi and interim Prime Minister Mohammed Salem Basundwa, the people have still not heard a legitimate argument that justifies the presidential election. This image of a farce election further deteriorated when nominations for candidates were blocked through a unanimous vote in Parliament in support of Hadi. Independent members of Parliament and members of the Joint Meeting Party (JMP) failed to justify in a coherent manner their decision to decline support for alternative candidates. This decision was then transmitted nationwide by the opposition through statements by General Ali Muhsin, Hashid’s leader Shaykh Sadeq al-Ahmar and his brother Hamid, as well as activists inside protest squares in Sana’a and Taiz during Friday sermons and lectures in tents.

Primary Challenges for the President Elect

Amidst fractured government institutions and further deterioration of security, Hadi faces four critical challenges. These are the economy, security and stability, youth engagement and divisions within the General People’s Congress (GPC). Of course there are other pressing issues that will undoubtedly pose major challenges to Hadi, but the Southern issue and Houthi rebellion can only be addressed once he strengthens his support base and gains the people’s trust.

The interim government has been unable to assist with the list of mechanisms outlined by the GCC initiative. Their only contribution so far has been the public support for the coming election. This lack of activity has frustrated international partners who are anxious to move forward with the military committee, urban demilitarization, and the liaison committee to demobilize protesters. It might have been too much to ask of a fragmented interim cabinet, whose centers of power have yet to decide how they will deal with the second phase of the transition, but people expected a more proactive government after President Saleh signed the agreement last November.

Even as leaders convey their support for Vice-President Hadi, Yemenis and observers remain uncertain over the success of the transition process. US Counterterrorism chief John Brennan arrived in Yemen on Saturday along with UN Special Envoy Jamal Ben Omar to close ranks in support of the election, but people still remain wary of the potential breakout of violence in areas beyond the control of central authority. Events in southern cities like Aden and Mukalla over the past week have raised concerns over the potential outbreak of violence as a result of a number of attacks against youth protesting against the legitimacy of the presidential election. It is still unknown whether the perpetrators were militants from the Southern Movement against potential supporters of the election or Islamists attempting to further fragment the secessionist Southern Movement.

Popular optimism is a rare commodity nearly three months after Saleh agreed to transfer authority to his deputy. International media remain focused on the presidential election while analysts await the next outbreak of violence. In the meantime, people in Sana’a hope the extraordinary holiday before election day will deliver more than the first full day of constant electricity supply.

After months of increasing weapons being seen on the streets of the capital, Shaykh Sadeq al-Ahmar’s call on Sunday to declare February 21 a weapons-free day may serve to alleviate people’s worries over violence or intimidation at the polls.

The government and its international supporters need a higher than expected turn out on Tuesday, but many among government officials and civil society organizations claim that two million voters nationwide would be sufficient to declare a successful election. This is only a floor limit and people around Hadi continue to exert all efforts to ensure provinces remain calm and voters feel secure enough to vote. A last-minute agreement between tribes from the northern areas of al-Jawf and Mareb granted the interim government increased confidence amidst calls for election boycott in Sa’dah by Houthi rebels and throughout the south by secessionists.

With an estimated price tag of over $40mn, the single candidate presidential election will continue to be challenged as illegitimate. President Elect Hadi will continue to face an uphill battle as he positions himself within his own political party and renegotiates the interim cabinet with an opposition empowered by their role in the past three months.

Hadi must still deal with President Saleh’s legacy, family and loyalists who remain uncertain about their future in the regime. The election is only the start of mounting challenges and without a powerbase, the new president will remain under the influence of the old regime and in a weak position in relation to the overconfident opposition. Furthermore, removing protesters from Change and Freedom Squares will require more than eloquent speeches and intimidating thugs.