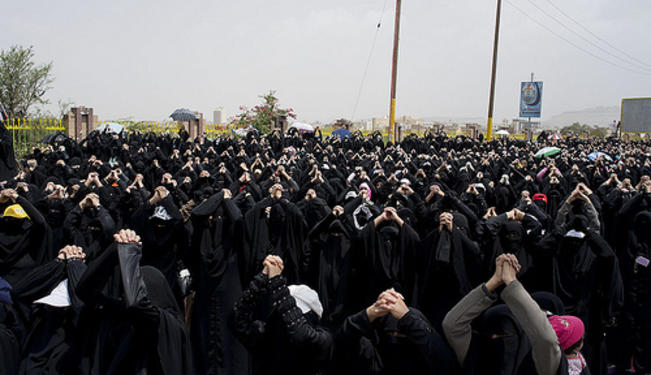 The footage of veiled women protesting in the ongoing Yemeni revolution has presented some of the most surprising images of the Arab Spring for outside observers, argues Bilal Ahmed.

There is much to be said about the current democratic uprising still occurring in Yemen. Most notable is the fact that it has challenged many common narratives regarding the interactions between Islamism and democracy, as an overwhelmingly devoted Muslim populace attempts to rally for peaceful democratic change in the embattled country. These misconceptions are rooted in the idea that the combination of Islam, tribalism, and traditionalism form an anti-democratic sentiment in Yemen.

The Arab Spring has helped to disprove that Islam itself is an anti-democratic force. Many revolutionary factions incorporate Islamists in their struggle to wrestle control from counterrevolutionary forces, which include other Islamist powers such as Saudi Arabia.

The stance that tribalism is an anti-modern force in Yemen is still largely debated. Tribes are currently divided between three distinct positions. Some, such as Sheikh Sadiq al-Ahmar’s Hashid Confederation, supported the uprising outright. Others, such as North Yemeni Houthi tribesmen, who have been accused of bribery, are assisting in causing strategic chaos meant to discredit the uprising. Many simply maintain a state of neutrality in order to negotiate new arrangements of autonomy with whichever government emerges from the rapidly escalating civil unrest in the country.

The last faction is particularly important as this neutrality is born out of the ideas of traditionalist Yemenis who are attempting to maintain a way of life seen as more ideal. This way of life, which is idealized through nostalgia for what traditionalists view as an ideal Yemeni and Yemen, has led to certain enshrinements which will prove problematic for some of the revolution’s social gains. It is indeed true that many traditionalist Yemenis will assert that Yemen (as well as Oman, but increasingly only Yemen) is the bastion of true Arab heritage in the region, and would feel threatened by the Yemeni uprising’s most intriguing development: that of mobilized Islamist-Feminism.

Islamist-Feminism can be defined in the feminist uprising that is occurring parallel to the ongoing Yemeni democratic revolt itself, though it frequently intersects with it as women join rallies and protests in increased numbers. It manifests itself in some of the most surprising images of the Arab Spring to outside observers; fully-veiled (wearing the niqab) women – usually seen as subservient and apathetic – protesting in the face of violent counterrevolutionary activity by the Yemeni government and shouting stirring revolutionary rhetoric such as “our blood is the fuel of the revolution.” Islamist-Feminism is the result of a cosmopolitan Islamist view on feminism that has emerged in Yemen and was mobilized by the ongoing revolution. The idea is that a devout Muslim woman can commit herself to Islam and to wearing the veil while still demanding a presence in the public sphere.

This is an important development in the history of Yemen, and indeed for the wider region. The fact that Islamism can be used to achieve the seemingly "too-modern-for-Islam" goal of democracy has been one of the Arab Spring’s greatest achievements. Indeed, its ability to be mobilized for the objectives of feminism is equally significant.

The Arab Diaspora hailed the awarding of the 2011 Nobel Peace Prize to opposition leader Tawakul Karman. Many felt empowered by the fact that a woman wearing a hijab (head-scarf) could share such an honor. This was compounded with the fact that Karman, who is widely proclaimed to be the “Iron Lady of the Revolution,” is also one of the youngest people to receive the honor. The additional fact that the revolution is dominated by the Islamist political party al-Islah – which saw 13 of its 46 electoral seats won by women – produces an atmosphere of optimism for Islamist-Feminism in Yemen.

However, we must be more cautious and realistic.

Bloggers and activists are astutely referring to the Yemeni uprising as a "Twin Revolution", one that incorporates the dominant democratic uprising as well as the Islamist-Feminist social revolution. The term “Twin Revolution” is a useful analytical tool as it describes two movements that occur simultaneously, intersect considerably, and help propel one another to future success, but ultimately do not guarantee each other’s success. The likelihood is that any ultimate gains made in the democratic Yemeni uprising will occur alongside disappointment in its Islamist-Feminist companion.

The fact is that Islamist-Feminism is simply too large a threat to the powerfully politicized sense of Yemeni traditionalism to achieve significant immediate effects. For example, Karman may be appreciated for being "veiled" in Western diasporas, but the fact is that many in Yemen consider her to be unveiled because the term “veiled” means something entirely different according to traditionalist standards.

Islamist-Feminism, which has resulted in women marching into the public sphere, is breaking an enshrined system of gender segregation that is vital to the sense of what it means to be a “true Yemeni.” It is not difficult to understand why the Yemeni traditionalist would feel threatened by this, as it is fundamentally seen as an assault on the beliefs of the traditionalist is and everything which the traditionalist stands for. The assertion that Islamist-Feminism is a threat to Yemeni traditionalism, and Yemeni society itself, will be politicized both in tribal regions and cities. Ultimately, it will act as a powerful piece of rhetoric in an anti-feminist counterrevolution that will unfortunately meet short-term success.

Additional rhetoric will follow in order to legitimize this core argument, as intellectualist reasons for pursuing counterrevolution always follow the spark of politicized fear and discomfort. Arguments will inevitably be made that Yemen cannot pursue economic equality among gender lines due to its financial collapse, as well as political and social equality beyond simple voting rights because it may antagonize powerful tribes and more traditionalist urban-dwellers.

The latter is particularly true of Sana’a. Indeed, if a successful revolutionary government does materialize, it will hardly have the resources to pursue and enforce the tenants of Islamist-Feminism fully when it is an issue that would cause many to refuse its legitimacy.

Women, ultimately, will be overwhelmingly told to "re-veil" and abandon their new prominence. Although Islamist-Feminism is rooted in religious justifications for feminist advances in the state of Yemen, this will ultimately not be enough to break the overwhelming force of patriarchy which, indeed, is a problem seen throughout the Arab Spring.

However, this should not be lamented. It should rather be strategically accepted, as simply telling the new Islamist-Feminist to abandon her convictions does not mean that she will do so. A similar situation occurred in the United States after American veterans returned from Europe after the end of World War II and female workers were told to abandon their jobs. The situation for female workers seemed hopeless at the time but eventually helped spark a wave of feminist activity that culminated in major successes throughout the 1960′s and 1970′s.

The impending failures of Islamist-Feminism are much like the Arab Spring and the period preceding the American women’s liberation movement, in that there are essentially growing pains of a rapidly evolving social structure. Indeed the ideology will continue to develop and likely have its greatest successes years and decades from now, just as the revolts of 2011 will only truly be felt in several generations.

Full equality and democracy takes time and energy, and the counterrevolution will subside over time as long as the struggle continues. We can apply this with great hope to Islamist-Feminism, which will eventually grow to be a significant force in the tumultuous and exciting Yemeni political landscape.

*[A version of this article was originally published by Comment Middle East].