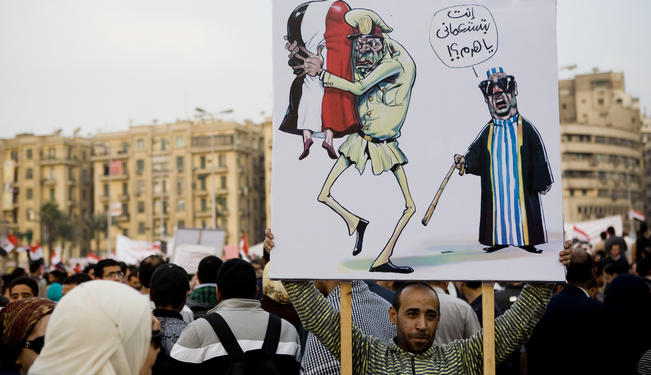 Rajai Masri explains the complex reality of the Arab world amidst the potential for real change.

One is coming to the conclusion that the “objective circumstances,”Al-Zorouf Al-Mawdouieh, are not ripe. The lack of political maturity among Arabs cannot lead to a constructive and orderly transformation or a change in the socio-political structure of the Arab world, at this particular juncture in history. The Arabs’ bid for change, under the rubric of the Arab Spring, is spiraling out of control, becoming chaotic, enduring, and is ultimately prone to hijacking by the better organized Islamic factions under a theocratic dictatorship.

Now the Arab Spring, once seen as the spark for an orderly change in the Arab world for the better, increasingly appears to be drifting towards Bernard Lewis’ theory of “Creative Chaos,” or Al-Fawdah Al-Khallakah. And with it comes all the hegemonic connotation in the imperialists’ designs aimed at causing further split and fragmentation to an already divided Arab world.

The Complexity of the Arab world

Five inherent realities render bids for sweeping socio-political change in the Arab world chaotic, unmanageable and open to exploitation. One can sum up these dominant realities, at the expense of oversimplification, into the following five factors:

The Arab world, unlike the French of the times of la Chute de la Bastille, is comprised of a constellation of ethnicities and sects that were often coerced and lumped together under the umbrellas of succeeding Islamic Caliphates ruling under the banner of religion, relevant to the spirit and mode of ancient times. These ethnicities and followers of varying religious sects were glued into one political entity under the rule of a dictatorial political system: the Caliphate.

In reality, under the single empire rule of the Caliphate, Kurds, Berber, Assyrians, Christians, Sunnis, Druze, Alawites, and so on, were never included under one coherent and homogeneous nationality. As with the example of Jews in the European ghettos, each of these ethnicities and sects kept at the micro-level to their distinct system of values and distinct sub-culture; a separate sense of identity.

Gamal Abdul Nasser’s outcry for Arab nationalism in the middle of the twentieth century, while rallying secularist Arabs under its banner, tended to alienate significant minorities of non-Arabs such as Kurds, Berbers and Assyrians.

Today, with political Islam becoming a dominant force in the new emerging Arab Spring Middle East, an Islamic Sunni-sect colored dictatorship, dominating the political landscape of the Arab world, would implicate the disenfranchisement of the Christians, Shiite, Druze, Alawites, and other non-Sunni minorities in the wide religious spectrum of the Arab world. That, in all cases, would become untenable;  it would lead to never-ending communal and social strife.

The Western imperialist powers, ever present under the cloak of a new nomer, similar to a chameleon, have vested interests in the strategically important Middle East; a wide geographic location that commands the gateways to important passages in some of the world’s vital waterways, and whose countries are sitting on much coveted energy reserves.

Israel, which was purposefully created as an outpost to protect Western imperialist interests and to act as a wedge to foil projects of Arab unity and revival, has since its creation assumed a life of its own with a separate vision and political agenda that often overrules the dictates and ultimate interests of its Western creators. Israel sees an orderly transformation of the Arab world (i.e. socio-economic and socio-political revival of the region),, as a zero-sum game; a mutually exclusive formula negating the Zionist doctrine and the exclusively Jewish character of the state. In addition, indigenous breeds of Arab intelligentsia, whose material interests are inextricably interwoven with foreign interests, are rendered as collaborating partners in aborting any Arab bids for revival.

Political transformation in the Arab world is a necessity dictated by the laws of evolution; the abysmal socio-economic state that the Middle East has descended into, cries for the right of self-determination and self-betterment in all aspects of life. It is long overdue, yet, the lack of a common ideology and the inherent ethno-sectarian divisions, aside from the imperialist-Zionist designs to foil genuine indigenous bids for profound reforms in the region, point to the inevitable dominance of one of two trends:

The first trend would lead to absolute dictatorship, theocratic and reminiscent of the Middle Ages. However, it runs completely against the spirit of our time, and against the universality and the increasingly open world we are living in.

Nevertheless, given the current objective circumstances and the varied ethno-sectarian makeup of an extended Arab world, and the stronghold that the imperialist –Zionist camp still enjoys over the fate of the region, single Arab states could in the short-term pursue their independent programs of genuine political reforms.

If each Arab state succeeds in enacting profound socio-political reforms and true democracy is established, at that stage, the Arab world can collectively link together under a more unified political system by virtue of the greater homogeneity of reformed political systems achieved at the state level. Otherwise, the Arabs will continue to spin their wheels, simultaneously attempting a national political reform process as a harbinger for profound socio-economic reforms.

As a state of chaos, internecine strife, mayhem, and enduring instability could prove wasteful and counterproductive.