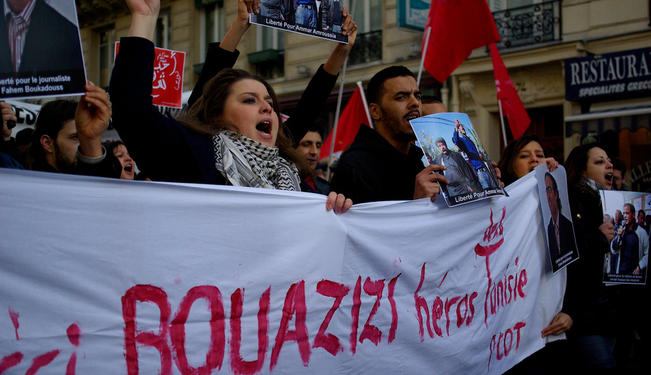 Tariq Ramadan, Professor of Contemporary Islamic Studies at Oxford University, speaks to Heather McRobie and Rosemary Bechler about the political and economic dynamics of the Arab Uprisings. This is the first of two parts.

Heather McRobie: I’d like to begin with the concept of Islamic democratic secularism and the statement in your book, Arab Awakening, that, "at this precise moment Muslims will only have proven the singularity of Islam when they demonstrate its universality." Could you explain what you mean by this, and the concept of Islamic democratic secularism?

Tariq Ramadan: It’s part of a whole discussion about ethics in my work. I focus on Islamic applied ethics in many fields, and here I am saying that coming back to the Qu’ran and the Sunnah as our reference point does not mean that we depend for our ethics on ‘Islam as opposed to the others’. I look to Islamic ethics to find something that can provide the basis for shared values with other traditions, and ultimately universal values. This ties into the point I made in another book, The Quest for Meaning, that the only way for values to be universal is if they are shared universal values. My main point is, in this quest for value the aim is not to express your distinctness from others, but about being able to contribute to the discussion of universal value. What I’m advocating is an intellectual revolution – it’s a different mindset concerning the ethical benchmarks by which we live.

Rosemary Bechler: In the book, those Islamic values are deployed both as a critique of western values and the Arab world's in their present state. Together they amount to a comprehensive critique of capitalism as a system, a critique which you also find reflected in the Arab Awakening which is the subject of the book. Do you think these seismic processes will take that path and build on that critique?

Ramadan: Unfortunately, some of the theses I put forward in those pages have now been proved all too correct. For example, in the concerns I voiced at the beginning of the book, when I said that I was cautiously optimistic, but that there could be a polarisation with secularism, and that in that polarisation, Islam was avoiding the main questions. The nature of the state is one thing, but there are other major challenges — what it will take to tackle the issues of social corruption, for example, social justice, and the economic system — and what are the future challenges when it comes to equality between the citizens, in particular in the field of the job market and equal opportunity for men and for women? This is at the centre of the question that is the Arab Awakening.

What I see now is that even with the Islamists, who have been portraying themselves as the alternative to corruption and dictatorship and in defence of more transparency, there is one respect in which they have now changed completely. Since the beginning of the 1920s, Islamism was very close in positioning in some respects to ‘liberation theology’. But that is no longer the case. Now the most important example of the last fifteen years is the move from Erbakan to Erdoğan, creating the Turkish model that has been highly successful in economic terms, but only in fact by buying into and succeeding in being integrated into the global economic system.

I don’t see anyone today, whether you look at the Muslim Brotherhood or En-Nahda in Tunisia or people working in Libya, or even the Salafi, who have a different position on the economy. The Salafis are now very much involved in politics, having changed their strategies over the last five years. As we know, though they have their own very particular take on the whole political discussion — they are obsessed with the political structure — they don’t talk about economic dynamics either. So this is why in Saudi Arabia and Qatar they can be very very powerful at the grassroots level, by being very strict about what is lawful and unlawful in ethical and political and cultural terms. But they are not talking about the economy either.

Bechler: Don’t they talk about the need for redistribution? One gets the impressions that the Salafi argument is often more concerned about looking after the poor?

Ramadan: Yes, but within the system. You can be a very charitable capitalist. Like Sarkozy was saying, we have to ‘moralise capitalism’, which for me is a contradiction in terms.

But this is my position and my position is that these questions are not answered or addressed by the movement now. I think we are making a mistake, a very big mistake if we look at what we call the Arab Awakening only by looking at the whole dynamics in political and not in economic terms. This brings me back to what George W. Bush said in 2003, when they were talking about democratisation. He said that it might be the major challenge for them, not to deal with democracies per se but the challenge of a new economic balance in the region. I think that this is very important, when you look at the influence of China and India in the region. These are new players here, and they are very efficient. They can compete with the US.

Bechler: Do you see anyone who is talking about this in the Arab world?

Ramadan: They are talking, in a way they are trying to find a way to get new partners in the region. For example, one of the first visits of President Morsi after he was elected was to China. They are looking at the new relationship between Turkey and Egypt which is also important. So does this just amount to being integrated into the economic order, to stabilise the Egyptian economy? It could be. Or might it be about something deeper than that? I think we have to consider that it is about a deeper challenge. When I wrote the book I said that for some young Islamists in Tunisia and Morocco and Egypt — the model is Turkey much more than Iran. When I visited Turkey people were so happy: they were so pleased that I had chosen them as the model. So I had to say, "No, you are not my model: what I was saying was that you are the model for some young Islamists."

"The Turkish road is not my model because I am critical of the way you are dealing with freedom of expression, of how you are dealing with the treatment of minorities, and your economic vision." But at the same time, I say, I’m watching what you are trying to do and I think there are things that are interesting in the Turkish approach, which for the first time in the last decade has started to shift towards the south and the east, opening almost fifty embassies in Africa, and having a new relationship with China. That is just huge.

So it might be that they are accepting the rules, and understanding that there is a shift towards the east. There’s a change in Turkey’s positioning vis-a-vis the EU — and now we understand that this was very smart — they used the EU against their own army. But that doesn’t mean that they were obsessed with the west. They were trying to find a way to confront the Turkish army with their own contradictions – “you are talking about a secular state but then you want a secular military state, and we want a secular state which is in tune with the requirements of the EU.” So they simultaneously use the EU against the army and meanwhile, they shift towards the south and the east. That’s interesting.

I don’t like this vision that Turkey is successful because it is as successful as the western powers in economic terms. But I do think they are trying to find a new space in the multi-polar world, and this is what I am advocating. I don’t think that Muslims have an alternative model. An ‘Islamic economy’ or ‘Islamic finance’ doesn’t mean anything to me. But I do think that in the multi-polar world, it is time to find new partners, to find a new balance in the economic order. And this could help you to find an alternative way forward. The way that Turkey, for example, is now very close to Egypt, and they are dealing with Malaysia and Indonesia on new terms. We don’t talk a lot about Indonesia but they are a very important power in the region. So I think we still have to assess and analyse these dynamics.

Read the final part on December 16.

*[This article was originally published in the independent online magazine openDemocracy].