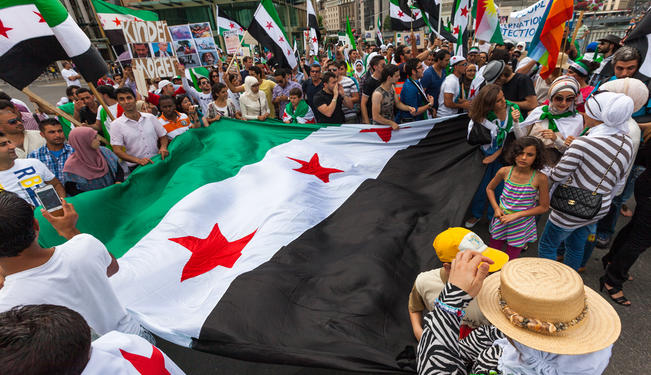 The Arab people have breathed the air of freedom and have decided that they will not agree to be in shackles again, argues Anas Altikriti. Once the Syrian Revolution achieves its objectives, the next phase of the Arab Uprisings will be ready to commence.

If 2011 was the year that shook the world and saw one Arab regime after another tumble and fall, then 2012 was the year when the Arab people grappled with the challenges, strains and opportunities of their newly attained freedoms.

Seldom in recent history has change happened so suddenly, dramatically, and comprehensively. Never has it taken place with the eyes of the world following every detail. Not only were Arab countries changing and the Arab people successfully grasping freedoms, ones that most of us take for granted and rarely give a second thought. Our own perception of the Arabs and the Middle East was being re-booted, re-formatted and re-structured with every passing hour.

But as these things go and as most predicted, changing a reality is often much easier than operating and making a success of the new one. 2012 was the year when the wheel of democracy and civil society institutions turned for the first time in decades for some, and for others was invented from anew. For millions, the first experience of standing in a line to cast a free vote; for others standing up and expressing an opposing view freely and without fear of dire consequences. The downside of course, was that for a political arena somewhat inexperienced in the protocols of open and free debate, opposition, disagreement, alliance-building and constitution drafting within the practice of democracy, the challenges were also going to be fairly considerable as well.

To those that saw in the "Arab Uprisings" or "Arab Spring" an advent of mostly negative outcomes, these difficulties provided evidence of their prophecies. To the majority, however, they were necessary trials on the path to full and total shedding of the former hydes of tyranny, oppression, authoritarianism and dictatorship. There is an overwhelming realisation that the removal of the dictator does not mean the eradication of the dictatorship or the uprooting of the structures which cemented the former regimes. There is also an appreciation that society as a whole needs to go through its own transformation in order to adapt to the new realities and monitor the progression towards achieving the objectives of the revolutions, including the media, human rights organisations, monitoring bodies, unions and professional groups, and other civil society elements.

Further, the entire region, including countries still not directly affected by the Arab Uprisings, as well as the world at large also watches events with a great deal of interest. Besides the dynamics of change themselves, matters related to economics, strategic interests, energy, social impacts, demographics and human mobility, security, and many more, are of great interest and concern to countless parties beyond the borders.

Therefore, the emergence of Islamic political parties as winners at virtually every round at the ballot box has understandably created heated reactions within the countries concerned and beyond. Some are still discussing whether those parties will push their alleged agendas for the establishment of Islamic states and the enforcement of Shari'a law; others are debating whether Al-Qaeda will regain a footing in the region as a result of these election results; and others still question whether international treaties, including those with Israel, will be observed or shredded and discarded.

Yet, what appears to be happening is that these Islamic political parties, or Islamists as the West prefers to call them, are hard at work trying to sort out impoverished economies, eliminating institutionalised corruption, re-building civil security elements, forming parliaments, and doing what any political party with a public mandate would be expected to do. They also appear to be adopting a narrative that is inclusive and of a nationalist rather than partisan, theological or exclusive in nature. Notable therefore, that many of their most staunch critics are mostly saying that those parties are not to be trusted when they speak such a positive language, rather than being critical of their policies or stands.

2013 promises an equal helping of bumps, challenges, tumbles and hurdles. However, the wheel is not turning back and despite the upheavals, the people of the region have breathed the air of freedom and have decided that they will not agree to be in shackles again. Once the Syrian Revolution achieves its objectives, the next phase of the Arab Uprisings will be ready to commence. That particular phase will most likely see a different set of events taking place; a set that see governments opening up to their people, initiating public forums of dialogue, allowing for elections, the formation of political parties and entering into a discussion with recognised opposition groups and figures. Radical change but via a different set of methods and dynamics.

What remains to be seen is how the West, governments and societies, react to all of this. Part of the radical change that countries such as Tunisia and Egypt have seen, involves a change in the dynamics of dealing with the international context. And it goes both ways. No longer can we or should we expect a submissive partner, or a partner that does not have national interests to further as well. No longer should we expect to address, engage with and listen to Arab governments and not Arab societies in order to form a picture or a policy. No longer can we continue to disengage with Islamic political parties en mass on the basis that some of what they say is to our disliking.

*[A version of this article was originally published by The Cordoba Foundation.]