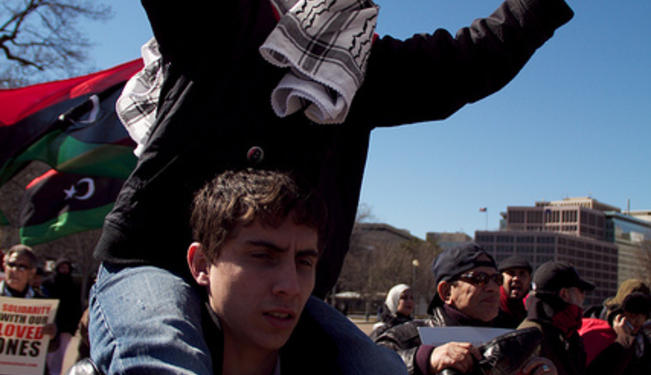 The Arab Spring, the Arab Uprisings, or the Arab Awakening. Many names have been used to describe the recent wave of protests that have swept and continues to sweep the Middle East and North Africa. The wave began on December 17, 2010 when Mohamed Bouazizi, a young Tunisian street vendor, saw his vegetable cart confiscated by the police because he had no permit. In protest, he set fire to himself and later died from his injuries in January 2011.

This act of self-immolation triggered protests, riots, and labor union strikes that began in the small town of Sidi Bouzid and soon spread to the capital, Tunis. These demonstrations—and most of all their international impact—sparked similar protests in Egypt, Algeria, Jordan, and Yemen, a civil war in Libya, and uprisings in Syria and Bahrain. The political upheaval effectively opened the door to demonstrations in other countries such as Morocco, Oman, Sudan, Saudi Arabia, Palestine, Lebanon, Kuwait, Sudan, Western Sahara, and Mauritania.

However, these types of revolutions and protests are not new to the countries involved. The historical events in the region have had an impact on the recent political upheaval. Most of these countries found themselves too affected by the game the US and the Soviet Union played throughout the Cold War, the influence of former European empires, and the conflict with Israel. This background led to nationalist movements that overthrew post-colonial rulers, but at the same time created room for the authoritarian actors who are contested today.

In 1861, Tunisia promulgated the first constitution in the Arab world. This was a period of major reforms in the country. Nevertheless, and in a rather similar way to what is happening in southern European countries today, Tunisia’s national debt to European banks grew largely and became unmanageable.

In 1869, Tunisia declared bankruptcy, which led France, Italy, and Britain to intervene. This state of affairs, and the Ottoman Empire’s earlier defeat by the Russians, together increased Europe’s interest in Tunisia. The French were more and more eager to take control and in 1881, after occupying Algeria, Tunisia became a protectorate of France. This presence would only be partially interrupted by World War II when the Germans took over.

The European presence in Tunisia led to the creation of nationalist opposition movements and in 1956, France conceded independence to Tunisia. This, however, did not mean democracy for the people. Their nationalist leader Habib Bourguiba was elected president in 1959. However, Bourghiba, who was known for his iron-fisted rule, soon declared he would be president for life and his party soon became the only legal party in the country, as he blocked any opposition to his rule. The turmoil during the 1980s meant Bourguiba’s replacement became inevitable. In 1987, Tunisia was now ruled by then prime minister, Zine al-Abidine Ben Ali.

The fall of King Idris and the rise of the Colonel

After the allies conquered Tripolitania (the former colonial region) in 1943, Libya was freed from Italian occupation and underwent British administration. In November of 1949, the United Nations passed a resolution stating that Libya would become independent before 1952.

The Emir of Tripolitania, Idris As-Senussi, led the transition and helped the regions of Cyrenaica, Tripolitania, and Fezzan unify to become the Kingdom of Libya. By adopting a federate state model, each city was granted autonomy. Hence, the kingdom had three capitals: Tripoli, Benghazi, and Bayda. Libya became a constitutional and hereditary monarchy with Idris as its first king. In 1953, it joined the Arab League.

It was however a poor kingdom with no infrastructures or resources. This would only change when oil was discovered in 1959. Economic growth followed thereafter, although, as in many other Middle Eastern and North African countries, the oil money was falling into the same small group of hands, the ruling elite.

On September 1, 1969, military officers led by Muammar Gaddafi orchestrated a coup d’état to overthrow King Idris. It was the Revolutionary Command Council that would abolish the monarchy and proclaim the new Libyan Arab Republic: Colonel Gaddafi had introduced himself to the world.

In July of 1952, a group of army officers led by Gamal Abdel Nasser overthrew King Farouk. The King had previously signed the Anglo-Egyptian Treaty, which allowed the British to station troops at the Suez Canal after their withdrawal from Egypt. However, the continued influence of Britain effectively paved the way for King Farouk's overthrow. Subsequently, Egypt was declared a republic in 1953.

Nasser was perhaps one of the most peculiar actors during this period of Egypt’s history. He had effectively played the US and the Soviet Union off one another, drew an aggressive campaign against the British and French interests in the region, confronted Israel, and nationalized the Suez Canal. The crisis that followed would introduce Nasser as the “leader” of the Arab world, as he promoted his notion of pan-Arabism. This state of grace would go on to prompt him to create the United Arab Republic, merging Egypt and Syria in one union until Syria seceded in 1961.

Anwar al-Sadat followed Nasser as president, leading to a new attitude towards the conflict with Israel, which culminated with the Camp David accords promoted by Jimmy Carter. The accords were the first step to what would be a peace treaty between Israel and Egypt. On one hand it meant the possibility of a new type of relationship with the US and Israel. On the other, it meant the decline of what Nasser had somehow accomplished—the respect of all the other Arab States. Beyond foreign policy issues, Sadat's economical reforms did not satisfy the Egyptian people, as bread-riots broke out in 1977.

The Sadat era also meant a new relationship with Islamists, as he encouraged a more religious approach to civil life and released some Muslim Brotherhood activists jailed by Nasser. Ironically, he would be assassinated by Islamic extremists who were outraged by the peace treaty with Israel. Following the death of Sadat, Hosni Mubarak, who was already vice president in 1975, became Egypt's next leader.

This brief historical overview highlights some of the events that led to the decades-long rule of dictators in Tunisia, Libya, and Egypt, particularly following the end of colonialism. What followed under the hand of these men in each country was a period of repressive and authoritarian rule high rates of corruption, human rights abuses, mass poverty, large-scale unemployment, a lack of political freedoms, increasing food prices, and other atrocities.

Indeed, the result of decades of repression in the Arab world led to the actions committed by Bouazizi, the subsequent nation and region-wide demonstrations, and the long journey towards democracy.