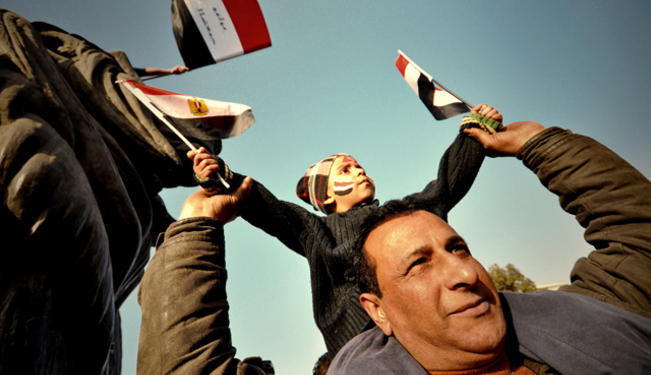 Tariq Ramadan, Professor of Contemporary Islamic Studies at Oxford University, speaks to Heather McRobie and Rosemary Bechler about the political and economic dynamics of the Arab Uprisings. Read part one here.

Heather McRobie: Many of the developments this summer in the countries of the Arab Awakening spoke to the concerns raised in your book. Take developments in Tunisia, such as the set-backs and delays in constitution-drafting. Do you see this as a reversal, the sign that the revolutions are derailing? Who will the constitutions of Tunisia, Egypt and Libya speak to and who will they speak for?

Tariq Ramadan: Yes, the drafting of the constitutions is interesting and the discussions around them revealing in many ways. I take it as a discussion of very important symbols revealing many different problems. My take at the beginning was to warn that Tunisia might be the only successful country, the only one to justify us in talking about the spring, while all the other countries were less successful, if not failing. Now the point is that even in Tunisia it is not going to be easy, and this is where we have a problem. The problem is that the constitution should have been and was an opportunity, exactly as Moncef Marzouki tried to do, to bring together the secularists and Islamists with so many of the same views. What was clear was that they would have been able to find agreement, because Rachid Ghannouchi and En-Nahda went so far as to say that they were not going to insist on putting shari'a into the constitution. They accepted that this wouldn’t happen, but that instead it would have been couched in terms which had an Islamic point of reference.

Now the problem is that you have two trends that are in fact objective allies in destabilising the whole process of this discussion: on the one side the very secularist elite that is doing everything to paint a picture that they are in danger from ‘the other side’ and on the other hand, the Salafis, who are constantly putting En-Nahda on the spot by questioning their religious credentials – ‘who are you? What are you doing? You are just compromising everything.’ And the secularists are saying about En-Nahda, ‘they are not clear because they want to please us and they want to please them.’

The secularists are playing a dirty game. You can be tough on En-Nahda’s policy and critical of some unclear statements which have been made, but they are playing games with this and pushing in such a direction is not helping the country to stabilise in such an important year. The constitution is after all talking about the vision for the future of the country. It is the opportunity to create a democracy. And in fact all the Islamists, that is the reformists not the Salafis, now they all say that they want a civil state, a civil state with Islamic reference points. They are not talking about an Islamic state, or shari'a in the way this was once understood in the fight against the colonisers, or just afterwards in the 70s, 80s and 90s. They have changed on this. Now, this meant that there was room for agreement between the different trends.

But not anymore. It’s very difficult now because we have this new integration of the Salafis into the political landscape. We have to ask questions – who is pushing them and who are these people, who in eight months in Egypt can say ‘democracy is against Islam’, and get 24% in the election. If you read the Rand Corporation on who supported the Salafis in Egypt, what you learn is that up to 80 million dollars’ worth of support was poured into Egypt before the elections by organisations that are not state, they are very precise on this, but Qatari and Saudi organisations. So it’s very worrying to see that they are getting the money and they are playing on all the symbols now – religious symbols pitted against your credentials for power, and the Islamists are being put into a situation where they can lose everything. I wrote a piece in the New York Times which said, Winning might be the beginning of losing, because you might win but you are losing your credibility by being put in this situation of being constantly challenged on religious terms, where you are not improving anything, and of course it takes time to reform a society.

So the question about the Salafi is an important question as I say in Arab Awakening, and have often repeated since. Now I am really underlining the importance of this, because we really don’t have very good memories. Remember, the Taliban in Afghanistan were not at all politicised in the beginning. They were just on about education. And then they were pushed by the Saudi and the Americans to be against the Russian colonisation, and as a result they came to be politicised. (They are not exactly like the Salafi because the Salafi think that they need to be re-educated, Islamically-speaking, convinced that they have to follow the prophet in a very literalist way.) But they too were pushed, so that it’s very strange now to see the Salafis being very vocal, sometimes violent, and developing this element now of Salafi jihadists. In fact, these jihadists are acting against the interests of every single country – in Tunisia, in Egypt, now all of a sudden in north Mali.

So I would say that it is strange to see the allies of the west pushing such trends that are against the interests of the country, and at the same time, here we all are, celebrating democracy. The problem with Salafis is that they are religiously sincere and politically naive. And they allow themselves to be supported by people who have no religious sincerity but who are politically very smart, especially when it comes to their economic interests.

Rosemary Bechler: Can we return to our opening question about ‘Islamic democratic secularism’ – a concept that I first heard about from Egyptian thinker and activist, Heba Raouf Ezzat, who you cite in your book. What she was promoting was very much an anticipation of the combination of non-violence and pluralism and its unforgettable impact on the movement in Tahrir Square. Is there any chance of that impulse of unity across divisions surviving and being strengthened in this crisis?

Ramadan: The way it was expressed in terms of solidarity in the first phase of the massive demonstrations is not going to survive for long: the people who were thinking this way got perhaps 2, 3, 5% of the votes. They were marginalised. But still, I think many thinkers and activists, even in the Islamist parties like the Muslim Brotherhood, and the people who left the Muslim Brotherhood to follow Abou el-Fatouh, these people do have an understanding that the relationship between religion and the state must be re-thought and re-assessed. They’re not going to use the concept of secularism in any straightforward way, because the concept of secularism is still far too loaded in that part of the world. When Erdogan went there and said ‘don’t be scared of secularists’ the Muslim Brotherhood rejected that outright.

But in fact without using the term, this is exactly what they are doing. They are moving towards the very essence of talking about the ‘civil state’ and that is exactly what we are talking about here. For years they have been talking about civil society, now they have progressed as far as thinking about the civil state. The ‘civil state’ is what I speak about in the book when I speak about ‘ethics in politics’, which is acknowledging the fact there are two authorities, two powers, two ways of influencing power, and that ethics should inspire the political vision of what is good governance, but that you cannot have an imposition of religion. I think politics is evolving in that direction, even within segments of Islamism.

Bechler: Is the dialogue across national borders also important, between Muslims in Europe and in the Middle East, for example?

Ramadan: Yes, there are ongoing discussions about this too. The problem with what we call the ‘Arab Spring’ is that these are very nationalistic experiences. Tunisians are concerned with Tunisia, Egyptians concerned with Egypt and so on.

But still I have been invited I don’t know how many times to Turkey, where Turkey has been following very quickly in the footsteps of what is sometimes referred to as the movement of cyber-dissidents. They have been training young people and also encouraging them to come into contact with western Muslims. What they ask me to talk about is precisely secular democracy and Muslim democracy – this, of course, is what the Turkish government also needs to be selling to the young Islamists in the Arab countries. It is this kind of understanding that they also share with someone like Anwar Ibrahim in Malaysia. So you can see the connections beginning to form. If in the very near future Anwar Ibrahim succeeds in Malaysia, he is positioned as very close to the Turkish experience, and many in the Muslim Brotherhood and En-Nahda have a similar perspective. So there are important relationships across national boundaries.

Remember, after all, that the name of the AKP in Turkey came from Morocco: after a meeting with the people in Morocco they started using the same name. So there are deep connections, and also a great interest in our experience in the west. This is something that they are listening to – very much so – you cannot imagine how much the books that I am writing are sought after by people in Turkey, who are eager to hear what I am saying about our experience of authority, power and the secular system. So this is very important, and it works especially well because I am coming from this background – that is also important.

*[This article was originally published in the independent online magazine openDemocracy].