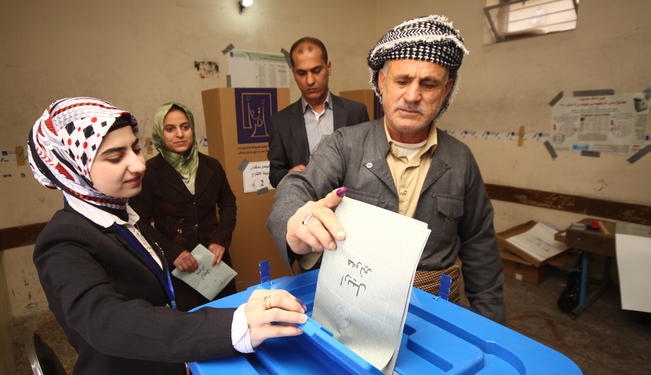 Brandon Scott, who served on a Tactical Human Intelligence Team in Iraq from 2004 to 2005, argues that despite the storm of sectarianism and violence,  the Iraq War should be perceived as a success.

The 10th Anniversary of the Iraq War was marked this week with the usual commentary of defeatism. It seems like no matter where one reads, the same underlying statement is made: The United States lost the war in Iraq. I strongly disagree with this argument.

Unlike in Vietnam, US soldiers, spooks (intelligence officers), and statesmen did not leave Iraq in a rush. The Mahdi Army or the al-Qaeda inspired Islamic State of Iraq, unlike the North Vietnamese Army in Saigon, did not roll down the streets of Baghdad tearing down all the political, security, and social arrangements that the US had built. Many critics state that the Iraq War was a failure because the country’s insurgency started after President George W. Bush infamously declared “Mission Accomplished!” or because the reconstruction efforts for Iraq continued painfully and fitfully.

These critics ignore the greater point about the Iraq War: the US accomplished many of its goals in Iraq, even if it took time. US involvement in Iraq from 2003-2011 cannot be viewed simply as a series of disconnected actions engaged in isolation of each other. The US, instead, ventured and succeeded in overcoming arguably one of its greatest challenges since the Second World War; which was to conduct regime change, wage a successful counterinsurgency, develop the security forces of Iraq, and provide economic development throughout the country.

Moreover, the US military effort to wage counterinsurgency in Iraq produced perhaps the most successful adaptive experience that the military has ever had. The US military adapted so well to the circumstances that it faced in Iraq, that it now exports counterinsurgency training to other countries which face current or potential insurgencies. It has also learned, in partnership with the Iraqi military, the empirical lesson that it is necessary to work within combined-joint-multi-national operations to confront complex and rapidly emerging threats. Several recent and forming conflicts in the world, including in Yemen, Somalia, Libya, Syria, and the Congo region, will test whether the US military learned thoroughly from its experiences in Iraq.

Iraq has also benefitted from the removal of Saddam Hussein, even with seemingly endemic sectarian violence, public sector corruption, and political conflict over the rights and responsibilities of the country’s diverse communities in the context of a federal system. The Arab Spring-inspired protests that have been occurring against the current Iraqi government are a step in the right direction for the country. Civil disobedience was ruthlessly suppressed under Saddam, and even during the US occupation of Iraq it would have been strongly discouraged, by Iraqis and the US, in the interest of promoting internal stability during war. Today, Iraqis are showing a greater willingness to empower themselves and to work through civil society and political mechanisms, which is an act of courage that will hopefully continue the process of building a democratic Iraq.

Economically, the Iraqi Gross Domestic Product (GDP) has grown consistently since the removal of Saddam Hussein, other than for a drastic drop of $20 billion from 2008 to 2009. In addition, Iraq’s Deputy Central Bank Governor, Mudher Kasim, recently stated that Iraq’s GDP will double in three years from $170 billion to $360 billion. Now, the challenge for Iraq and its international partners such as the US is to facilitate the country’s exports, drive profits from energy resources into education, and continue to improve the country’s infrastructure.

Perhaps most promising for Iraq is the bravery and dedication of its youth. It was my distinct honor to participate in the US Department of State’s Youth and Education Study (YES) program where I interacted directly with Middle Eastern youth in Washington DC. In the summer of 2008, I participated in YES as a Cultural Adviser for a cohort of Iraqi high school student participants. As I took them to the airport at the end of their program, I remember tears welling up in my eyes, and theirs, as we hugged and promised to stay in contact in the future. We all knew that I was wishing them well as they prepared to return to an Iraq that was still in the midst of sectarian conflict and a US military surge.

In my mind, these Iraqi students were a ray of sunshine in the storm of sectarianism and violence in Iraq. It has been four years since that day, and perhaps a rainbow of hope for the future of Iraq is emerging from the clouds. One of my students, a courageous and brilliant young woman, was featured as a speaker at TEDx Youth Baghdad Conference. Upon seeing her picture, and hearing about her confidence in a better future for Iraq, I was overcome with emotion.

All of the Iraqi students expressed to me that they would not have had the opportunity to achieve what they have, under the stagnant regime of Saddam Hussein. Many of them attend universities in the US, and are actively involved in civil society capacity building and social development, in the service of their country. Tell them, then, that they are fighting for a lost cause.